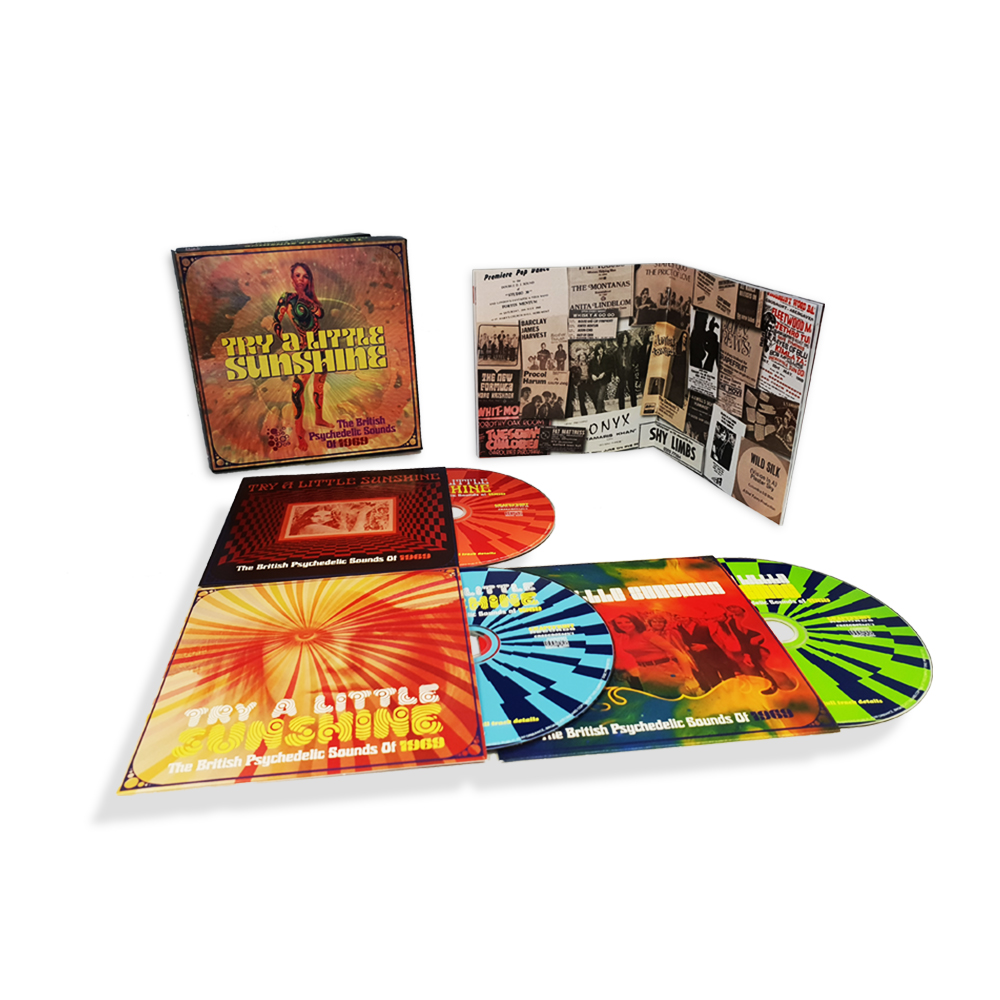 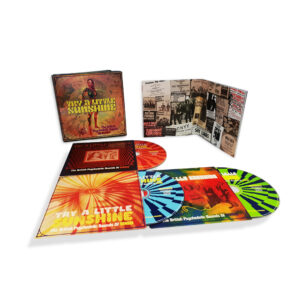 Subtitled The British Psychedelic Sounds Of 1969, this new boxset seeks to survey the changed Pop landscape of the UK as the “swinging” decade came to a close. Big names like the Pretty Things, the Move and Barclay James Harvest rub shoulders with lesser known outfits like the Cape Kennedy Construction Company and Jason Crest in pursuit of the ultimate sunny high….LTW’s Ian Canty attempts not to get burnt…..

There is a theory that I have referenced before that reasons the Psychedelic explosion of 1967 and the Punk wave of 10 years later were in fact quite similar phenomenon. Following this to its logical conclusion, though by 1969 Psych in its purest form was over, it didn’t stop bands from still cutting fine examples in the style. If you think about 1979 there were still some pretty decent Punk tunes being released (off the top of my head Babylon’s Burning, Tomorrow’s Girl and Sound Of The Suburbs for starters), despite Punk having been pronounced dead as early as mid-77.

All of which is a roundabout way of saying that often great music is made far away from the cutting edge, which is sort of what this new boxset Try A Little Sunshine is all about. For example, the Factory’s title track (which kicks off this collection) might have made more sense coming from the final weeks of 1966/early 1967, but the fact it arrived 2 years afterwards does not impair our enjoyment of it one whit now. Conversely the incredible Who Wants Happiness by Tapestry seems right up to date, a sawn-off history of UK 60s music in three minutes: the Prog and Jazz inflections of the intro give way to a freaky, distorted guitar, which in turn cedes to verses whose music sport a shimmer of Beat and R&B in their structure and a flowing organ line that recalls the frantic Soul dances of the Mods. All this is topped off by a bitter original song with a hugely infectious, driving chorus. But of course didn’t get anywhere near the charts.

The UK Pop scene was a wide ranging field and Try A Little Sunshine, although its subtitle demands at least some trippy items, doesn’t skimp on highlighting Soul, Prog and Folk-influenced efforts either and all points in between. Also at the time there was a “back to basics” drive from the big boys (Beatles, Dylan, Stones etc) after Psychedelia’s excesses and that has an effect here too. Popular music was hugely over-manufactured during these days which meant records that had all the hallmarks of hit singles often missed out on the charts though a mixture of bad luck and poor timing. The UK scene was moving towards a more album-orientated direction, but that had not truly kicked in yet. 1969 was still a time when things were looser and this set includes the lesser known back pages from well-known bands like the Move, The Spencer Davis Group (in their fab but under-appreciated Post-Windwood days) and the Pretty Things plus more obscure acts.

Also Psychedelia seems to declare open season for subject matter in lyrics, from toytown nonsense/children fiction (for example The Walrus And The Carpenter by Peter Howell And John Ferdinando) to tales of the high seas (Procul Harum’s hit Salty Dog and Gentle Influence’s Captain Reale, that one comes replete with a pinch of “What shall we do with the drunken sailor?”), to the mundane meeting the fantastical (Fat Mattress’ excellent “Close Encounters” effort Petrol Pump Assistant, Edwards Hand’s Magic Car and Creeping Jean by Dave Davies, a real lost classic – who knows what he might have achieved if he left the Kinks?). The wild subject matter is often matched by the music, which often goes in many directions all at once, like the musicians went into the studio with a head full of ideas that were just bursting to come out into the open.

So what you have here is a treasure trove of (mostly) forgotten 1969 UK music, 45s which slipped away after sometimes high level TV appearances and radio play (for example the Balloon Busters’ Alcock and Brown, a batty Bubblegum tribute to the aviation legends, was featured on ratings winner Dee Time before disappearing off the face of the earth), songs hidden on b sides, or tracks even never saw the light of day for one reason or another.

Disc one here is a blast from beginning to end. We get long-standing bands like the Montanas, the Sorrows And the Beatstalkers (once home to Alan Mair, later of the Only Ones) all having a go at Paisley Pop with a fair amount of success, with the latter’s version of a Reg King song Little Boy possibly being the pick. Although knowing the name I don’t think I’ve ever listened to Barclay James Harvest before copping an earful of Brother Thrush, but I like what I heard, a glistening Pop/prog mix and Les Bicyclettes de Belsize actor Jason Paul doesn’t seem out of place on his Shine A Little Light Into My Room. He’s got a decent voice and the relatively austere accompaniment suits the song well. The Hammers (and yes they supported WHU and were previously beat favourites Chords Five) provide a sprightly Baby And Me with a decidedly Soul tint and This Time Tomorrow is a beautiful delve into the mighty Move’s back pages.

A kind of stately, big production Pop Music gained traction around this time too, with disc 2 having a great example in Colin Griffin’s Changes In Our Time. The former member of the End coming up trumps with a quality item embellished by some lovely horn work. By 1969 it seems classic Psych outfit Fleur De Lys were edging towards a more Hard Rock sound on their scathing Liar, though they still knew how to equip an extended musical workout with a top tune. Shere Khan, fronted by Frank Aiello formerly of Mod-Pop act the Truth, show their Motown/club roots on No Reason, though the blasts of guitar and high vocals make for a thoroughly bracing trip.

Lemmy turns up on tabla supremo Sam Gopal’s It’s Only Love, a good tune not that hindered by the lack of drums (Fellow “underground” travellers the Deviants crop up on disc three with their Folky Punk hoedown Death Of A Dream Machine). Grapefruit had the patronage of Apple without making much headway but if Deep Water is anything to go by, it didn’t do them much harm, as its back to the basics approach results in an eminently danceable romp.

There’s another Dave Davies link on this disc too as ex-Turquoise drummer Ewan Stevens manages a good version of DD’s song Mindless Child Of Motherhood and roped the man in to play and sing on it too. It might have had a decent shot at the charts, had it saw release at the time. Marc Brierley’s b side to his Stay A Little Longer Merry Ann single is a very pretty bit of Folk Pop entitled Flaxen Hair and Trader Horne, although associated with Folk too having a Fairport Convention member in Judy Dyble, really weird us all out with their strange and compelling Morning Way.

On the final disc were immediately encounter Jason Crest with their outrageous single Black Mass – organ-based doom-laden Psych with chants, crazed screams and backwards phasing, I wouldn’t have liked to have been the A&R man trying to get airplay for that! It’s a great one-of-a-kind record though, one that probably couldn’t have come out at any other time. Andromeda feature John du Cann who would later go on to front Atomic Rooster and make a mad Pseudo-Punk LP with some of Status Quo (also on this disc with The Price Of Love which finds them at the mid-point between their Psychedelic period and the “heads down boogie” to come). Andromeda impress with Day Of The Change, which of course comes with some inspired guitar mangling, it is both spacy and riffy and could be the perfect 1969 record.

Ireland’s Taxi sport a sound a little akin to the Stooges on Counting My Time Away, if Ig and the boys had a flute on hand that is and like Second Hand on the sarky Good Old ’59 their R&B/Soul days still manifest themselves in their work years on. The Freshmen were apparently Ireland’s Beach Boys, but heard here Mr Beverly’s Heavy Days they sound the perfect mix of Psych and Bubblgum. On a similar tip Little Bird by Eyes Of Blue is a fine piece of Sunshine Pop, really lifting the spirits with a lush and olde worlde feeling. By 1969 the optimistic idealism of the 60s was beginning to fade and be replaced by pessimism. So studio sessioners the Cape Kennedy Construction Company (including Shadows drummer Brian Bennett and singer John Cater at some point in their career) end things fittingly with their Armageddon, subverting Like A Rolling Stone wild guitar slashes, rocket fire and of course explosions.

Try A Little Sunshine is certainly an education to anyone thinking that 1969 in the UK was a comedown after the highs in the mid-60s. In fact there was still a huge amount of fresh ideas and agile minds squeezing new angles out of what many thought at the time was a busted flush. If people weren’t listening back then or thought the items featured were passé, it doesn’t really matter now. This may have seemed like downtime back then, but now the vast majority of tracks on here sound like they came from a peak creative period. I’ve mentioned the ones that caught my ear here, but there is so much more for a 60s hound such as myself to explore, the fun is in the detail and everything is nicely presented with pen-pictures of each band in the sleeve notes. This comp works as an alternative history of the year, away from the charts but in no way lacking vital tunes, brilliant playing and singing and madcap ideas. Will we ever see the like again? The bods at Grapefruit haven’t let us down – 1969, on this evidence, was very fine indeed.