Various Artists – Trick Or Treat – Music To Scare Your Neighbours 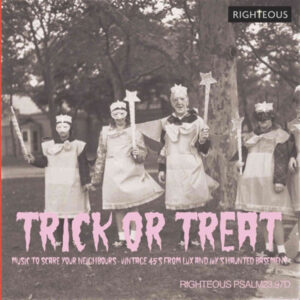 Subtitled “Vintage 45s From Lux And Ivy’s Haunted Basement”, this new 2CD is another romp through the Cramps duo’s gargantuan vinyl collection, with a seasonal focus this time round on Halloween…..LTW’s Ian Canty prepares his doorstep for a thorough egging……

When Righteous began this series looking at Lux and Ivy’s mammoth record collection perhaps it was always odds-on that one day a Halloween collection would make it darkly through the night to record stores. Part of it is that the day in question is explicitly tied up with the odd Americana that the Cramps always mined as an inspiration. Drive-in cinemas that showed the latest B-Movie horror flicks sat beside rock & roll, jukeboxes and hanging out at the diner as part of the 1950’s USA experience. Added to that, Halloween has always been a bigger deal on the other side of the Atlantic and the campy chills attached to it would obviously prove irresistible to the Interiors (Ivy and Lux in this case, but there’s also a band of the same name on disc two with a fab r&b exciter by the name of Voodoo Doll).

Also hot on the heels of Halloween comes the Mexican Day Of The Dead festival, which explores similar themes, but in a more positive way i.e. celebrating the lives of people who have died, rather than purely trying to frighten the living daylights out of your neighbours. So before we British start accidentally blowing off our own digits with small explosives and burning effigies of some bloke who was trying to blow up parliament, lets us look at what Trick or Treat holds for us.

The first disc of this set has plenty of raucous, scream-enhanced rockabilly, with a few jazz, pop and blues weird-outs thrown in for good measure. This choice selection kicks off with Round Robin’s lively I’m The Wolfman and the following effort The Mummy’s Bracelet by Lee Ross is also a prime rocker, a cautionary tale on the pitfalls of theft from the eponymous spook. There’s bongos a go go on Don Sargent and the Buddies’ Voodoo Kiss and Bill Buchanan and company jam as many horror tropes as they can in the two and a half minutes of Beware, including a Bela Lugosi impression, zombies and screams, all atop a girl group “death disc” musical backing.

The sleaze quotient in the saxophone on Hugh Barrett And The Victors’ Fungus Among Us is abnormally high, but is nicely counterbalanced by some witty female backing singing and the bug-eyed sounding stylings of Bobby Please’s The Monster are a whole bundle of fun. It’s Witchcraft by the Blue Echoes has a ringing guitar line and hiccupping vocals and Morgus And The Three Ghouls mines the Coasters (more of them later) to good effect on Morgus The Magnificent.

Away from rock and roll Bob And Jerry’s hep and swinging Ghost Satellite and the exotica of Voodoo by Cyril Diaz & His Orchestra shows that jazzers were also up for the odd scare. As this disc draw to an end we have Nervous Norvus (of Paralysed fame) stammering through The Fang and a killer (sic) segue of Graveyard Rock and King Kong by Tarantula Ghoul & Her Gravediggers. Tarantula was actually actress Suzanne Waldron, who had a regular TV gig in Oregon as the Vampira-alike host of House Of Horror.

Disc two of Trick or Treat has some better known names in the Coasters, Bo Diddley and Screamin’ Jay Hawkins – if I Put A Spell On You conforms thematically to the compilation’s remit, I can’t help but wish they had picked something of his that was less well known. The Mummy, by Rod McKuen, is to my knowledge the only song covered by both the Fall and Bad Manners, which goes a little of the way to explain its off-beat charm. Bob Luman, outta Blackjack Texas, had a big hit with Let’s Think About Living (while we’re on a cover tip, the Nightingales did a memorable version of that one), but here he plays a neat guitar instrumental entitled The Creep.

Bo Diddley’s track Bo Meets The Monster is one of the highlights of the set – he was great at constructing novelty on top of his masterful R&B chops, I couldn’t help but grin whilst grooving. The Coasters’ track The Shadow Knows is also a great deal of fun, slick comic blues vocals that of course were their “stock in trade”, but against the spooky shadow voice. Graveyard by Leroy Bowman And The Arrows starts like a parody of 50s pop – in fact it probably was – before becoming a mighty fine piano-pounding rocker a la Jerry Lee.

Though Daniel Webber & The Devil’s Big Daddy may evoke chants of “easy, easy” from the older of our number in the UK, it actually is a cool and moody piece at “Fever” pace and werewolf howling gives way to some good r&B on Screamin’ Ball (At Dracula Hall) by the Duponts. The Five Jones Boys’ acapella of Mr Ghost Goes To Town sounds eerily like electropop, despite the fact it is all voiced and was recorded pre-World War 2! The bossa nova jazz dance of The Blob by the Five Blob is the death rattle of this comp and what a crazy, mixed up trip it has been.

Trick Or Treat – Music To Scare Your Neighbours is another enchanting search through some outright strange old singles, with a lot of quality beyond the “Bwahh I’m so scary” lyrical front. The odd trick, but lots of treats. To paraphrase one of their songs, Lux and Ivy had got good taste, but as they used to say at the end of Crimewatch “don’t have nightmares” – but you will, you will haahaahaahaa!