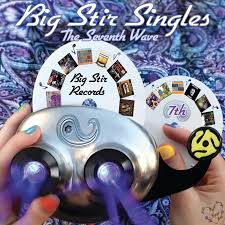 Seventh collection drawn from the Big Stir Digital Singles series, with contributions from Nick Frater, The Corner Laughers and Anton Barbeau among others…LTW’s Ian Canty gets down to the big pop sound of 2020…

The various editions in the “Wave” compilation series issued by the Big Stir label have quickly made themselves indispensable guides to great happenings in the world of pop music of the more powerful stamp. The Big Stir team’s unerring taste and ear for a good tune puts them in pole position to to ferret out bands and artists that are equipped with both an ability for killer songs and an interesting and melodic way of presenting them. The Seventh Wave shows no sign of any slackening off. New names are introduced and mainstays of the series return, each replete with oodles of the qualities mentioned above.

The tracks on The Seventh Wave are, like their predecessors, taken from the label’s popular Digital Singles Series. So naturally in most cases we get a and b sides from each band/singer. The Ex Quaranteens are the odd ones out here, with the cool drifting country rock of We’ll All Drink Alone Together being their only track featured here. Despite only having one slot to impress, they do on this sad song of resilience and I for one would like to hear more from them.

Going back to the start of The Seventh Wave, The Incurables kick things off in fine style with the rollicking Cook ‘n’ Jones crunch of Far Away, a real fireball of a tune. Anyone who knows me will understand I don’t give out compliments like that like confetti. My regard for Paul and Steve’s work knows no bounds and for The Incurables to put me in mind of them is definitely a good thing. Their second effort, the simple but pleasing garage holler of Soda Pop, again marks them out as a band with a lot to offer.

The multi-talented Anton Barbeau shows up next with his two backing outfits Kenny and Thrust. Kenny and Anton’s Land Of Economy, from the excellent Kenny vs Thrust LP (reviewed here) is a prime slice of modern psych pop that has some tough clashing guitars and drumming, plus a real hook to die for too. Please Look At My Teeth, on which Anton is joined by Thurust, spins a bit of sunny folk rock into the mix, with appealing results.

The heady and enchanting The Calculating Boy comes from The Corner Laughers’ blinding Temescal Telegraph LP and they return under the pseudonym of Agony Aunts on Countless Psalms, where they motor on very brightly in busy fashion. Broken Arrows’ The Worst Of The Rest is really a song for the times, gleaming in a Byrds’ jangle style while they succinctly take down the monstrous chain of events that has resulted in 2020’s dire circumstances. Their second track, When I Was A Boy, doesn’t quite hit the same heights, but nonetheless it is a decent country rocker of ample promise.

Next comes Rick Hromadka with an evocative and cool powerful rock/popper in Searchlight and he proves the success of it wasn’t a fluke with the very pretty and charming Dreams Of A Hippy Summer. Sadly we only get a relatively brief showing from the great Nick Frater here, the smart harmonies of the self-explanatory Intro and the slightly more substantial Say What You Like (Say It’s Alright), a beautiful keyboard ballad with subtle chime effects.

I very much enjoyed Phoenix’s own Carol Pacey & The Honey Shakers’ work as featured on The Fourth Wave and If Romance Is Dead Then I Want To be Dead Too is no let down. Their incendiary punk energy made me think of X here and the slower and sunny Love Does shows they’re no slouches when applying the brakes as well. The Fifth Wave veterans The Forty Nineteens give us the addictive Stooges’ riffing of Late Night Radio, which features Tony Valentino of The mighty Standells. Their flipside, Crocodile Tears, brought to mind the tuneful explosiveness of classic Buzzcocks. Tasty, very tasty.

New Jersey’s John Fotiadis, AKA Empty City Squares, posts the memorable Parmendies and a neat edgy 1960s style ditty History Rhymes. Both are well put together, catchy pop music that deserve to be heard. Kai Danzberg gives us both the original 2019 demo and new version of his song Let Her Go, the latter cut with Dear Stella as a duo. A real gem that works in both formats. Finally The Vapour Trails, with a father and son songwriting team in Kevin and Scott Robertson, beguile with Strange, a great near-new wave toe tapper and the sunny, lightly psychedelic and delightful A Bit More Fire.

With The Eight Wave already available (review on the way) and a Xmas edition The Yuletide Wave (ditto), the hits from Big Stir just keep on coming. The Seventh Wave is another fine entry in the series, full of winning tunes, artistry and invention. Great discoveries await the lucky newcomer. It leaves no doubt in my mind that great pop music is out there and in rude health. This collection captures some fine examples of it and all are very deserving of your attention. Just imagine if these tunes were coming out of the radio all over the country – it would make the very bleak worldview of 2020 just a touch brighter for certain.