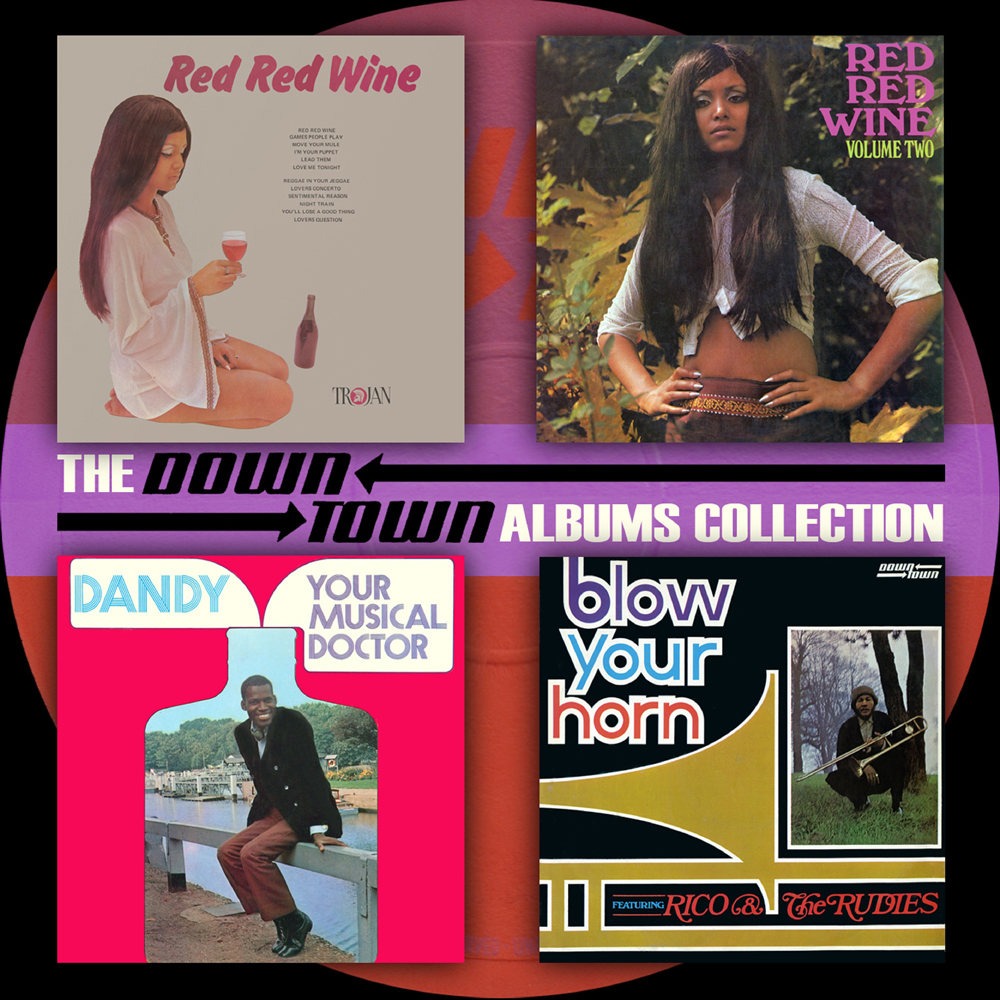 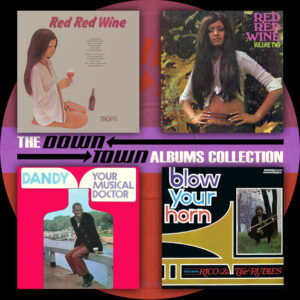 New collection featuring four classic Skinhead Reggae albums produced in the UK by Robert Thompson aka Dandy, best known for his 1972 top 20 hit Suzanne Beware The Devil and Rudy A Message To You, which was covered by the Specials in 1979…….LTW’s Ian Canty looks at how the London-based producer managed to rival the homegrown Jamaican efforts for a while at least…

When a 15 year old Kingston native by the name of Robert Livingstone Thompson made the journey from his homeland in order to settle in London in 1960, few could foreseen the effect this young man would have on UK music by the end of the decade. Getting his start as a performer as early as 1962, it was two years later when his recordings first saw release, Thompson singing both parts of a duet on four 1964 singles credited to Sugar And Dandy.

The most successful of these was What A Life, which sold 25,000 copies. Keeping the Dandy sobriquet, he worked solo and in tandem with a number of other singers and bands, recording for the famous Blue Beat label for some time in the middle of the sixties. Switching to Ska Beat Records just in time for when the beat slowed down for the Rocksteady craze, Dandy released his own song Rudy A Message To You in 1967, which became one of the first UK recorded songs in that style to rival its Jamaican counterparts. Just a year after this milestone, Dandy started to combine production with his singing career and had his very own imprint Downtown, which was distributed by Trojan.

It was only natural for the sizeable community of Jamaican musicians and singers, that had made their base in Britain at the time, to want to produce and release their own music. These discs could be played over the sound systems at Blues dances, as getting imports from JA was often costly and fraught with the risk, that having secured that prize disc, all of you competitors would be furnished with their own copies as well. Even so a lot of the DJs and system owners were highly sceptical of these home-grown efforts, viewing them as second rate to what was on offer from Kingston no matter what the sound was actually like. Dandy knew his offerings they had to be just as good if not better than what was emerging from Treasure Isle and Studio One to even be considered – it was tough going and even years later this prejudice would be difficult to get past for the UK’s Reggae artists.

However there were also positive aspects to being so far away from Orange Street, which would show their hand just after Dandy had started issuing his material on Down Town. Rocksteady had given way to the faster Reggae beat and with this change came a vast influx of new fans to add to the ex-pats who had settled in London. These new adherents to Reggae became the youth cult of 1969, the Skinheads. With Dandy being close at hand, he was able to monitor what went down well with these strange looking kids and then produce items as perfect a fit for them as a smart Crombie or a Two Tone Tonic suit.

One of the really big records for him was Tony Tribe’s version of the Neil Diamond song Red Red Wine, which brushed the UK Top 50. Unsurprisingly it is the first track on the initial LP featured on The Downtown Albums Collection and still is an attractive piece of late Rocksteady with an energy that most subsequent covers lack.

Tribe himself (aka Tony Mossop) was a bit of a mystery man, he features on both Red Red Wine collections and led Gopsel act the Soul Seekers prior to his Reggae fame, but had disappeared from the music scene soon Volume 2’s release. At first it was claimed he died in a car accident in 1970, but to muddy the issue afterwards some singles emerged later in Canada by a Tony Kingston, someone who seemed to match Tribe in voice and looks. They could of course have been issues of old sessions and internet searches do not seem to yield much more information, so he remains an enigma.

Taking the Tighten Up format, Red Red Wine the album collected 11 previously issued Downtown Records single tracks plus Desmond Riley’s Lead Them (penned by Dandy and originally released on parent label Trojan), onto a budget-priced album. Apart from the tracks credited to Dandy himself, he also features under The Israelites pseudonym with a neat cover of Joe South’s Games People Play. Under his own name he contributes Move Your Mule, where he sounds a little like the great Desmond Dekker and his Skinhead classic Reggae In Your Jeggae, which almost cracked the charts. It would have been a well deserved hit, an excellent and hugely catchy example of the form.

Dandy had worked previously as a duo with Audrey (Hall) and produced her later solo works. On both Red Red Wine albums her efforts seem to pre-empt Lovers Rock, the best of which is the soulful Love Me Tonight, slightly akin to Nora Dean’s Barb Wire and with an appealing guitar sound. But her other two on this album You’ll Lose A Good Thing and Lovers Concerto aren’t duds either.

Dandy’s production job on Gene Rondo’s (I Love You For) Sentimental Reasons catch the ear, a watery Proto-Roots sound that is a joy to behold. Sonny Binns & The Rudies hijack James Brown’s Night Train signature and get it running on solid Skinhead Reggae rails instead and Dandy’s ear for a guitar lick shows again on Gene Rondo’s Lovers Question. The perfect record for the dancehalls the Skins frequented and interesting listening even at home, Red Red Wine handily held its own in the exalted Tighten Up company.

The success of the album (which was a good seller, but budget albums weren’t allowed in the official charts) meant that a follow up duly appeared a year later. Many of the artists returned, with Desmond Riley’s peach Somebody’s Baby tight rhythm and organ swirls entrancing and The Boy I Love by Blossom Johnson reaching back to Rocksteady for its influence, a very prettily sung Soul Reggae love song.

Dandy covers Andy Williams Can’t Get Used To Losing You which may well have had a bearing on the Beat’s cover ten years on and Tony Tribe’s I’m Gonna Give Her All The Love I Got is a fast paced gem. Dandy’s band the Music Doctors get in on the act with Party Rush, a smart guitar instrumental and he finishes things himself under the Israelites name with a Reggae-fied cover of the Fabs’ Come Together.

Blow Your Horn, which came out just after the first Red Red Wine LP, is the only one of this set that has previously been issued on CD and begins Disc 2 here. Credited to Rico and the Rudies (who later became Greyhound, the Black And White hitmakers), this album also had 4 tracks by Dandy himself to make up the numbers (his I’m Your Puppet isn’t on the running order of this one as it already was featured on disc 1 track 4 of The Down Town Albums Collection). Rico Rodriguez had already quite a history with Dandy, having played on the original Rudy A Message To You in 1967. He also played on the Specials cover in 1979, providing some wonderful lazy trombone and a vital link back to the dawn of Reggae in Britain.

There is plenty of his expertise on show on Blow Your Horn, the cool, R&B-tinged Jumping The Gun and Quando Quando, replete with DJ intro leading the way in. Dandy’s offerings don’t just make up the numbers either, The Lion’s batty big cat impersonation is very infectious and an unstoppable momentum drives Muma Muma. The album ends on a high note with Rico in his element on the taunt and brassy instrumental groove of Biafra.

The Final Selection here is Your Musical Doctor, Dandy’s second solo album originally issued in 1969. While as a producer he was very aware of the scene and what needed to go into constructing a hit record, Dandy also knew a little variety and innovation was the key to a bit more substance and the contents of Your Musical Doctor bear witness to this. Steel drums feature effectively on When Will I See Her (Gonna Give Her All The Love I Got) but crucially do not dominate and Gumption Feeling is an organ instrumental in the Skinhead Moonstomp mode. There’s a strong Gospel feel to Meeting Over Yonder and Voicing Our Choice tries to portray a live show’s ebullience with a jokey, semi-spoken vocal.

In a more traditional manner, Doctor At Work is a smooth and very danceable number and Everybody Loves A Winner takes the Liquidator as the basis for a sweet love song with nice harmonica touches. Set closer Come On Home has Dandy’s vocal and horns locking up in fine style, overall this is another very satisfying collection that hangs together pretty well as an album, despite the material’s roots as single sides. Added to this, there’s a cracking pair of bonus tracks at the end of this disc – Won’t You Come Home Now is a smashing brew of excellent female backing vocals, trumpet, cool organ and guitar sounds and Rico And The Rudies’ Blues is a lovely jerky skank.

The Downtown Albums Collection is a beautiful listen and a vital document in the development of Reggae in the British Isles. Dandy was a pivotal figure in boosting the credibility of UK cut material and in doing so helped to establish a long lasting affection for the music here. Though the Skinhead craze tapered out not long after the release of Red Red Wine Volume Two the grooves he put together had a long shelf life, influencing Two Tone a decade later and still being eminently danceable and catchy today. An excellent compilation that will have the least dance-inclined up and grooving.