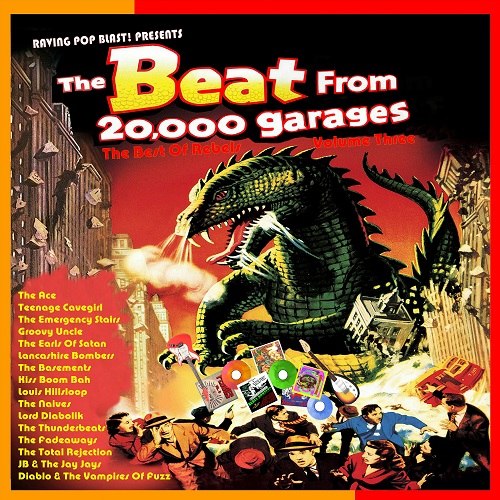 The garage-rock compilation, a staple in any music fan’s collection. From Nuggets to Pebbles, Back From The Grave to Teenage Shutdown; long have such compilations been the gateway to many bands, treasure troves that open the rabbit hole to fall down again and again. Raving Pop Blast! are keeping the torch shining with their Rebels’ series. They kicked it off with Rebel Rousers, followed it up with Strange Creatures, and are back again with instalment number three: The Beat From 20,000 Garages.

First up is the aptly monikered Diablo & The Vampires Of Fuzz with their pure 60’s garage freakbeat sound on Troubled Man. It eases in over chiming guitar licks before cranking that classic germanium fuzz sound that has long defined the style. It is sprayed all over many of the tracks here, from The Basements’ Out Of My Mind to The Thunderbeats’ (Hey!) Don’t Talk To Me!, who also make great use of that spiralling Farsifa organ to underpin the whole song.

Back in 2018, we first heard Japan’s Fadeaways, and they’re back here with the pounding Comeback, before Lancashire Bombers fly in with I Left Her Flying from their recent Spinout Nuggets release, Into The Sun. Raving Pop Blast!’s own head honcho appears with his band The Total Rejection on the fantastic Gravy from their 2020 album, The Time Traveller’s 3rd Will And Testament. It wails around over great vibrato-soaked guitar.

Sprinkled through the album are also some great more stripped-down moments. Louis Hillsloop gives a wild barking vocal performance on the buzzing acoustic You Know I’m A Dog, while The Emergency Stairs wander a laid-back groove on Just Let Me Be! They add another side of the great variety to the fuzzed-out tunes. As any garagehead knows, fuzz is the king. It comes back again and again, fantastically on Earls Of Satan’s Shake It Down and Teenage Cavegirl’s Get Off The Road.

Across 16 tracks, Raving Pop Blast! give a great look at the ever-pulsating garage underground. Always moving and mining the same classic sounds, no genre sounds so classic and yet instantly fresh. But be warned, copies are flying off the shelves so this is a release you’re going to want to jump on quick.