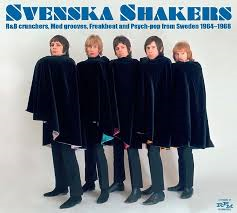 2CD Collection of 60s Grooves from a pre-Abba Sweden – LTW’s Ian Canty contrasts the differences between European states and their response to the world-wide phenomena of Beat Music/Psychedelia….

Now I could run through all the usual clichés about Volvos, Fjords, Abba and Andres Svennson’s unfeasibly long running international football career, but the fact is Sweden on the whole took to the changing 60s Music environment like a duck to water (yes I know that’s a cliché too, do keep up….). Though perhaps not quite attaining the reputation of Holland’s fearsome and extraordinary Nederbeat scene (and while the French saw 60s pop as an opportunity to extract the urine out of each other, admittedly in an eloquent and stylish way), they did however boast a number of bands adept in Garage Rock and Psych who also embossed their waxings with their own, sometimes crazed, take on things. The Tages, the Mascots and the Shanes are probably the better known outfits (all featured here) but as this compilation proves (which is in effect a follow up to “Searchin For Shakes” the legendary 1984 album which focussed for the first time on Swedish Beat) , there was a lot else bubbling up just below the surface, as we shall see.

The work of Stockholm band Annaabee-Nox is featured five times on “Svenska Shakers” and provides us with a fascinating ride through 60s pop styles, all given their own special touch. We can in effect chart their progress over the years from 1965 to 1968. Even at the start they were becoming something other than the standard Beat band, their take on Mose Allison’s “I’m Not Talking” setting off with an unsettling intro straight out of the “Noise Rock” handbook before haring off into a fast dance with added Pop Art guitar slashes. A year later there was a fairly straight cover of the Who’s “The Kids Are Alright”, well that is until it explodes into a farrago of weird drones igniting a rave-up that all renders it something else entirely, before pulling things together for the outro. From the same year “Bo Bo Boogie Pack” is a fuzzy mid-paced Mod pounder, ending with an unsettling manic cackle. By 1968 the ‘Nox as I like to call them embraced eerie Psych Pop on “Anna Be Nice” and by their final track here “Always On My Mind” were pumping out Prog Pop garnished with gentle wah-wah and a beat built for dance. They never seemed to stand still and settle for the ordinary, adapting each coming musical phase to their own peculiar ends.

But they aren’t the only band to excel on here, far from it. The Namelosers, a garage rock band from Malmo, feature twice with the nonsense sounding lyrics of “Do-Ao” not telling half the story of this wild, insistent Freakbeat monster with a guitar that wanders in an out of tune without a care in the world. The Fools’ Farfisa driven “Baby, I Want To Know” is a joy straight out of the garage and the Evil Eyes Mod Pop character study “Mister Mystified” could have come off “A Quick One”. Elsewhere the Yardleys come over like a Swedish Downliners Sect on “It’s Gonna Work Out Fine”, Horanges move R’n’B towards the 60s dancefloor with “Daddy Rolling Stone” and of the better known bands Tages impress with the fuzzy dance groover “The Man You’ll Be Looking For”. But there’s so much to enjoy, even a very familiar standard like “Land Of 1,000 Dances” gets a thorough duffing up by the Namelosers (again) and sent on its way as a superior Psyched-up fuzzball.

Though disc one has its fair share of unheralded stormers, disc 2 of this comp is the winner here, being almost flawless from beginning to end. But it’s a tough call as the vast majority of songs featured here would brighten even the most hard-hearted 60s-phobe’s day. It feels a little unfair to highlight certain offerings above others because all are great in their own way. But here goes! The Mascots “I Want To Live” starts off in a fairly mainstream manner, despite the odd, fatalistic lyric, until a scream appears as if out of nowhere, whereby the guitar goes into a Freakbeat break which manages to include a snippet of “Greensleeves” of all things. The highly individual Science Poption (and excuse me, what a name!) follow with the almost hymnal Folk Rock “Monica” which soon becomes involved in a scuffle with some organ-led Blues – it has to be heard, incredible. As to prove their adaptability, they’re back again with “You’ve Got Me High”, a cool Garage Punk/Pop crossover.

Booker T and the MGs must have made some inroads into Sweden as their kind of ultra-tight backbeat forms the spine of the Long Johns’ snotty “Don’t Want You No More” (the Best’s “Back Door Man” on disc 1 also shows their mark). The Cheers take Jefferson Airplane’s “Somebody To Love” and turn it from a Hippy anthem into something far more edgy and the compilation ends with the T-Boones who pre-dated the Stooges by at least a year with their tense, Punk Rock version of John Mayall’s “I Want You”.

Fine, informative sleeve-notes by Kieron Tyler (I learnt a lot reading them) and some classy repros of the 7″ sleeves contribute to a great starting point for anyone coming fresh to the wonderful and weird world of 60s Swedish Beat. This quality collection comes highly recommended to fans of 60s Pop, Garage, Psych, Mod…hell anyone who likes music, come get some!