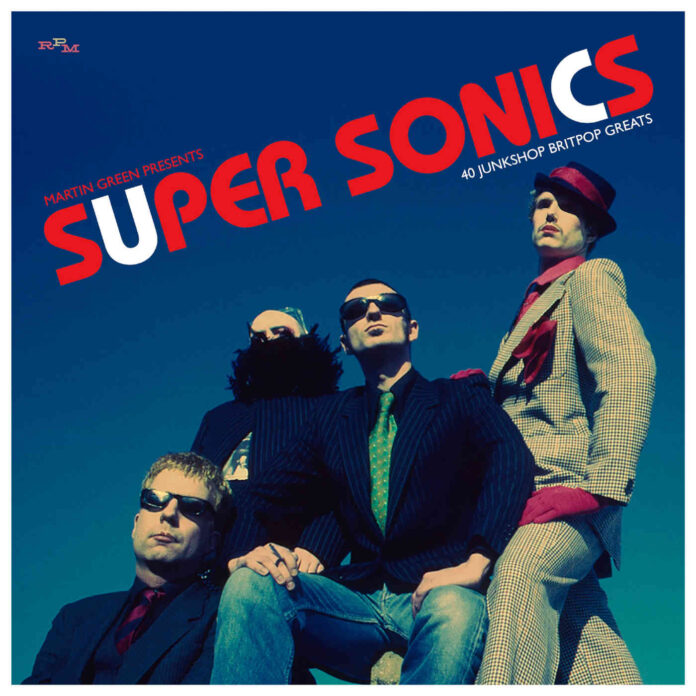 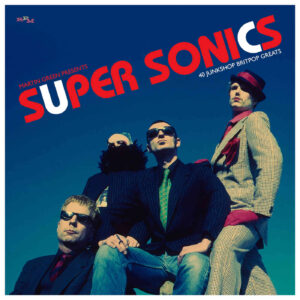 Subtitled “Martin Green Presents 40 Junkshop Britpop Greats” this new compilation sifts the hopefuls from the hopeless amidst the lost UK music of the 1990s….LTW’s Ian Canty tries not to think of “the big two” and instead feels the quality among the chart failures…

Britpop was a bit of a rum time all round really wasn’t it? On paper it looked promising – a sort of UK response to grunge I suppose, with mod, indie, glam and punk all thrown together at once, with a kind of elegantly wasted vibe atop. It had potential at the time, no doubt, but looking back seems a bit lacking in depth, with dodgy links to hoary old dad rock.

Now it seems a million years ago now when Blur and Oasis duked it out at the top of the charts and in the yellow press, “Cool Britannia” became the buzz phrase of choice and spots on The Word became way more important than they had any right to be. A panto throwback to the swinging 60s, concocted within a mile radius of the Good Mixer and other Camden hostelries. Well it doesn’t sound much worth celebrating when you put it like that, but the mid-90s like any other time had its share of both good and bad. A lot of music was generated by this boom period and obviously not all of it could make the charts. What slipped through the cracks makes up the bulk of Super Sonics.

Junkshop has over the last 20 so years become something of a cause celebre, hoisting great but forgotten records back from the doldrums. Mostly this has centred on the glam rock period of the early 70s. But Martin Green, who ran the Smashing club night at the height of britpop, on Super Sonics attempts to re-position this aesthetic twenty years forward to the 1990s. It does make a bit sense as the single was the perfect format for a lot of these bands, as they on the whole tended to run out of steam and ideas over an album’s length. But as for actual bond fide Britpop, well it is in shortish supply. Which actually isn’t really that bad a thing, as a more interesting and varied tale reveals itself instead.

Powder start things off with Afrodisiac in prime britpop mode, all upfront female vocals and dirty guitar giving way to the kind of jaunty skank that was all the rage at the time. A good single, all surface maybe but an attractive one. More involved in another questionable “movement” i.e. the new wave of new wave, Mantaray impress with Sad, a power guitar/stoned vocal combo with just a hint of No Fun. Andy Lewis, a DJ at the famed Blow Up club based at the Laurel Tree, was involved with both Pimlico and Spearmint, who offer the pure power pop surge of Revolve and the fast and exciting Goldmine respectively.

Moving on, Lauren Laverne is someone who I can only take in small doses on television, but there’s no doubt that her band Kenicke were sufficiently punchy, as witnessed on Come Out 2nite and if So Small by Showgirls is essentially an update of the Primitives’ sound of the 1980s, they do it well. Chest’s Nosebleed is a shimmering pop nugget, despite them labouring under one of the blandest band names ever and Speedway, another outfit from Sean McLusky ex-Subway Sect/Joboxers, yield a truly bracing tune in Entertainment. Scotland’s Urusei Yatsura come up trumps with the JAMC-esque runaway rollercoaster Plastic Ashtray, they were from the same Chemikal Underground stable as Mogwai and the Delgaldos (also featured with the appetising but strange song Monica Webster), but sound little like either of them.

It’s quite odd to find Heavenly here – the Talluah Gosh spin-off might have a meatier sound than before on Trophy Girlfriend, but this is surely high quality indie pop. The two bands who really brighten the end of this disc far more identified with riot grrrl than britpop. Huggy Bear’s Her Jazz is a hot one, scratching and explosive and full of pent-up punk energy, they’re a band very due a reappraisal. The snotty and dismissive cool of Supermodel – Superficial by Voodoo Queens provides the ideal way to end disc one of this set.

Disc two if anything moves further away from what most would consider archetypal Britpop. Stephen Duffy had long since dropped the Tin Tin bit and folded the Lilac Time by the time of his rollicking London Girls, the first track on this platter. It’s a real modern stomper with a meaty lick that cherry-picks the 60s and 70s excellently, Duffy was never britpop or anything else but a huge talent. From here on though things nod much more to dance than guitar pop, which isn’t a bad thing.

The first hint is the bubbling groove of Sometimes The Kids Are Not Alright by the High Fidelity. Sean Dickson, ex-Soup Dragons, lead this bunch and though I suppose you can see a natural path from baggy to this as much as anything, it’s good. Add N To X sway towards industrial dance and harsh electro on Inevitable Fast Access and We Are Pleb housed comic/actor Paul Kaye, though if their track Mood Music is anything to go by he made the right choice to follow the comedy path. Velocette sound pleasantly like an indie pop St Etienne or a less Neu! influenced Stereolab on Strip Polka and the superb David Devant And His Spirit Wife spin one of their atmospheric and intriguing tales entitled Pimlico.

Billy Childish sidekick Sexton Ming teams up well with Steady on the low-key Conker Fight At Wendy’s House. Steady also features on the gritty guitar passion of Crawl (raw mix) by Elizabeth Bunny and Sweetie’s insanely fast techno pop number Curl Up. Earl Brutus were a pop sensation on their own and owed virtually nothing to britpop, which doesn’t make their thrilling electronic belter On Me Not In Me any less essential. RIP Nick Sanderson.

Menswear, or Menswe@r if you like, the kings for a day, are represented by a remix of their best single Daydreamer. In its original form they ran the risk of being charged with impersonating Colin Newman in a built-up area, yes there was more than a hint of Wire about it. But you would hardly know here, there’s barely a guitar to be heard. Like a good deal of this disc, it is actually works in the song’s favour. To end Super Sonics we have Rialto’s The Underdogs, a very agreeable, high quality pop number that could have come straight from the late 1960s. The song’s title could have been about any number of the acts featured here. The odds were stacked against them at the time, but against all probability they’re back.

Away from its slightly iffy premise Super Sonics does muster a fair amount of thrills and brings to light some acts who merited far more than they actually received. There’s still a few chancers (Bis for example), but a lot of good stuff too and a pleasing variety of sounds. Some of the better bands on here would have probably set about you if you called them britpop with good reason, but their presence here is valuable. When Super Sonics works, it works despite of the theme rather than because of it. But as a wise head said to me recently “”Miscellaneous 90’s Bands” isn’t as catchy a title”, so britpop is as good a name to hang on it as any I suppose.

I have to admit I found a lot to like here, despite being at first more than a little sceptical. A rewarding dig into a time when what was going on below the surface was a lot more interesting than the mainstream. After listening to Super Sonics you might question whether britpop really existed as a genre in itself, but you won’t regret spending your time reliving an almost unheard 1990’s.