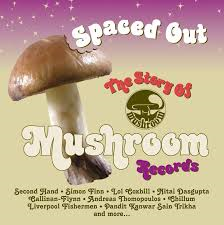 Various Artists: Spaced Out, The Story Of Mushroom Records

2CD collection with one disc focussing on Vic Keary’s British Prog/Folk label Mushroom, whose roster featured Lol Coxhill, Second Hand and Magic Carpet, along with a separate disc of Vic’s earlier adventures in the 60s Pop scene………Ian Canty listens to the most unlikely off-shoot of Skinhead Reggae ever!

Vic Keary was one of the most important names in the production of UK Reggae, who along with his partner Emil Shalit opened a studio up in the Camden area of in London and welcomed Jamaican musicians who had decamped to the UK. Legends of the JA Rude Boy scene such as Rico, Laurel Aitken and Prince Buster graced the newly christened Chalk Farm Studio with their presence. Though the hits flowed out of the Chalk Farm, Vic felt the financial rewards were outweighed by his ambitions in shaping sound. In effect he felt he was packaging material for the chart, which did not leave much room for experimentation. By 1970 he decided to give opportunity to his creative impulses by launching his own record label, Mushroom Records (This imprint was not to be confused with the Australian Mushroom Records which would launch two years later and boast signings as disparate as Kylie Minogue and the Saints).

Vic’s Mushroom would have a much wider scope than his recent Reggae-based activities, recording bands and artists of all kinds of genres, including Folk, Psychedelia and even World Music (yes before Peter Gabriel and even Brian Pern!). This was a scattershot, “Apple on a budget” approach which was aimed more or less at the Portobello hippies and their suburban counterparts. Second Hand, previously a Mod band called the Next Collection (who feature on Disc 2), supplied two willing hands for the setting up of the studio in Ken Elliott and Kieran O’Connor so they were in. Ravi Shankar, who was signed by EMI (and therefore doesn’t appear on this collection), gave Mushroom a boost and let them release his new double album too. From then on it appears from the sleeve-notes that Mushroom was a bit of a struggle, with it being eventually wound up in 1972 after releasing just a handful of singles and albums, from which the first disc presented here are drawn. Keary went onto the Cactus label and enjoyed more Reggae based hits on the back of a brief mid-70s revival.

Sometimes when you really dig into these things hey aren’t quite the standard Hippie fodder they at first seem and that is the case here. After a typical but quite spritely sitar drone by Pandit Kanwar Sain Trikha, which would no doubt back bring memories of sitting on rugs with the smell of Patchouli oil hanging heavily in the air to those that were there, there’s a couple of oddball but very appealing Pop songs. Les Flambeaux, who I definitely could have heard more from, manage the almost impossible feat of harnessing Steel drums in a way so they actually add something to their “Evil Ways” rather than swamp or actively detract. Similarly Second Hand’s first offering Hangin’ On An Eyelid has a peculiar bell effect which just adds another facet to a cracking tune. They really are the stars of this disc with their other tracks Take To The Skies and Funeral also being a whole heap of Psychedelic Prog Pop fun.

King of avant-garde sax Lol Coxhill parps to good effect on his typically off the cuff Or Alternatively Nine. Though not being a Folk fan per se when Mushroom did go in that direction it thankfully wasn’t too often in the “hey nonny no” direction, more the easier for me to digest Folkie Pop (however the Liverpool Fisherman’s sea shanty The Ould Triangle was a bit much for me). Simon Finn’s Jerusalem, which closes off this disc, has to be heard as he goes from calm-ish to full on ranting and raving over the course of the song – that type of one-off madness is the key here. Andreas Thomopoulos’ Report To The Sad Lady is quite beautiful and Chillum, Second Hand’s later handle, provide the brief piano and snoring oddness of Land Of A Thousand Dreams. Though the Mushroom posse were a rag-tag mob and some of the Folk hasn’t aged well, inversely in fact to Second Hand and Andreas Thomopoulos who sound pretty contemporary and vital. Still it’s all interesting at the very least.

Disc 2 is however a joy all the way through, it’s chock-full of goodness (apart from a syrupy version of White Christmas by Mel Turner who redeems himself with the Soul styled Jungle Harlem) and makes the package all the more tempting. Vic’s productions at this time were mostly great, uncomplicated 60s Pop. This could range from the oddly Joe Meek sounding Chasing Shadows by the Mark Leeman Five to John Williams’ infectious Baroque Folk Pop and the Carolines’ female take on Freakbeat Love Made A Fool Of Me.

Alexis Korner’s Blues Incorporated put a stylish version of See See Rider and Tuesday’s Children’s A Strange Light From the East is a real goodie which blends Oriental influences to some Bossa Nova Powered Psych! Second Hand feature with an earlier recording, coming on like a stoned Byrds on their The World Ended Yesterday and they wrap up the collection here with the title track of their LP Reality. Their previous incarnation the Next Collection also bolster Denis Couldry on I Am Nearly There, which is a good slow-then-fast Beat ballad. The Attraction’s two offerings are uniformly great but the pick of the Freakbeaters for me must be Angelina’s Wishing My Life Away. This one even seems to have pre-empted the Smiths somewhat.

Spaced Out The Story Of Mushroom Records breaks down into two specific Pop timeframes and gives us a chance to enjoy the unconscious Pop thrills of the 60s along with the more serious early 70s vibe (perhaps for continuity’s sake we should listen to the second disc first?). As a package it’s a great introduction to some fine but ultimately unsuccessful UK Pop and Rock from the mid-60s through to the early 70s. Though Mushroom, like a lot of early 70s underground ventures didn’t last long and wasn’t exactly flushed with success, it had some good bands and artists on the roster for the couple of years that the record company existed. Those promising but unheralded waxings, along the early Vic Keary productions on disc two, serve as a testament to his skills and show that his undoubtedly huge impact on UK Reggae was only a facet of his creativity.