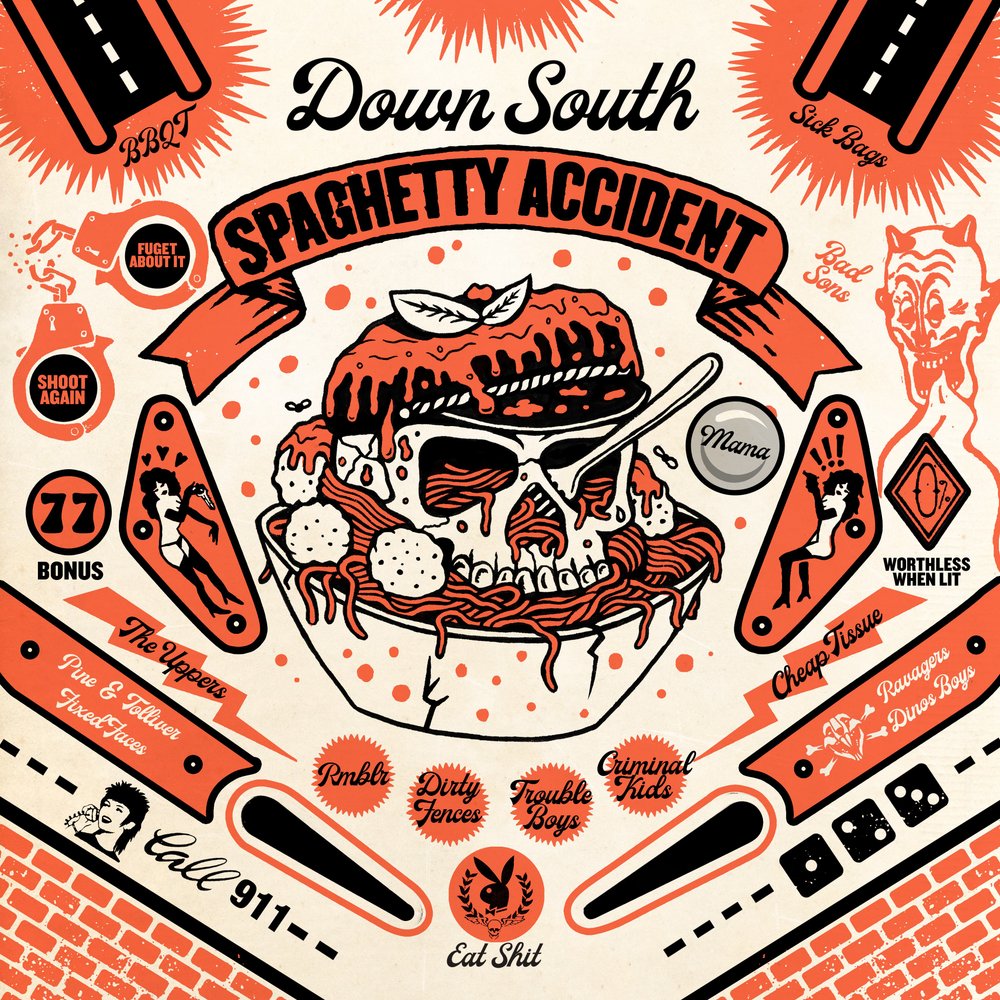 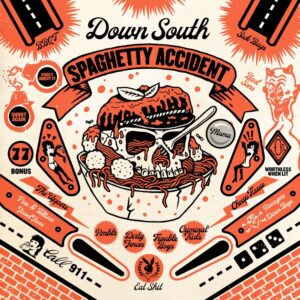 I first heard of Spaghetty Town Records via a couple of releases, namely two singles by The Sweet Things (who are touring the UK this summer) and an album from Criminal Kids, all three of which were suffused with that kind of sweaty. gritty RnR fever  that I sometimes miss in this vacuous, sterile musical landscape. If you can imagine a planet where President Stiv Bators rules supreme, the poet laureate is Bo Diddley, Iggy is in charge of the Arts and the Ministry for Pharmacology is headed up by Johnny Thunders and Jerry Nolan, that’s the world that the good folk at Spaghetty Town should be soundtracking.

With a roster of bands that are a continuation of the down and dirty deeds of all the best of the last 40 years, a compilation like this one was always gonna be a winner. Fourteen tracks of driving, scuzzy, spit-flecked, fuzzed-up chaos, few of which breach the 3 minute mark is pretty much the Spaghetty Town modus operandi and nothing on these two sides disappoints.

The aforementioned Criminal Kids charge forth with their cover of Gangster’s  “Run From the Police” which fits their own template of Ramones-Dead Boys- Motorhead- style guitar abuse very well indeed. As mentioned, their self-titled album from last year is well worth checking out. This track is slightly less of a blitz than their own material but is damn good anyway. The trilling, barrel-house piano is a nice touch.

BBQT have a little bit of the glam stomp about them; “Savage 512” could be a slightly more deranged Guida or female-fronted early Slade with its rollicking swing and Gabbie Bam Bam’s swaggering vocals. Suzi Quatro would be more than happy with this ‘un.

Dinos Boys don’t mess around with a winning formula either- taking the Detroit sound of the MC5 or Psychedelic Stooges is never gonna be anything other than great and while nothing on the album is ground-breaking by any means, it’s a whole lot of fun sound-tracked by sizzling guitars and thunderous drums. Who doesn’t want a bit of dumb, punky escapism? I certainly do…

The opening track from RMBLR (yep, the bands on the label do love an acronym-style name!) is a power-popping, summery track called “Next Time” which very much reminds me of The Boys in its proto-punk glory; the chorus is a huge hook and the fizzy guitars and tightly-wound drums are hugely smile-inducing. I defy you not to like this.

Sick Bags join the fray with “If You Can’t Join Them (Beat Them Up)” and as you’ve probably guessed by the band name and song title, they are a bunch of irreverent punk rock headcases with a song that’s peppy, poppy and reminded me of X or The Avengers a little bit. Melanie, who fronts the band, has a terrific, laconic punk voice. The band fire away on all cylinders and do what they need to do and getouttatown.

Fixed Faces contribute “The Call” which deviates very slightly from the grimy rockin’ of much of the album with a lighter take on Dead Boys/Heartbreakers-style vamping. The backing vocals sweeten the deal considerably and there’s a slicing guitar solo in there that’s pure Cheetah Chrome. Come to think of it, the vocals from Joey have a touch of the Tom Verlaine about them, too. This is a good thing.

There’s a bunch of tracks in a similar vein and there’s nothing on here that’s filler at all. As a sample of what is going on in Spaghetty World, this is almost perfection. With acne and a bad attitude, obviously.

If you’re a fan of garage, punky, dirty rock and roll and fancy some of what you’ve read, this is as good a place to start as any.

Buy it from HERE