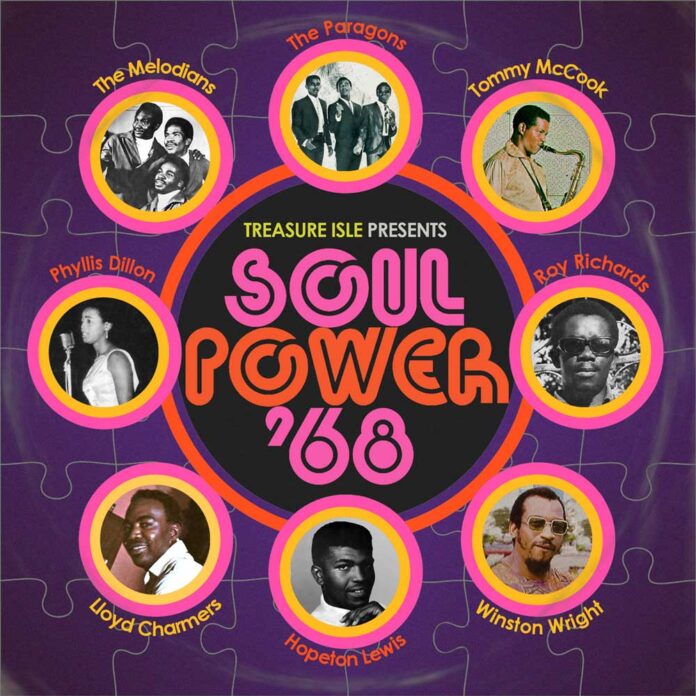 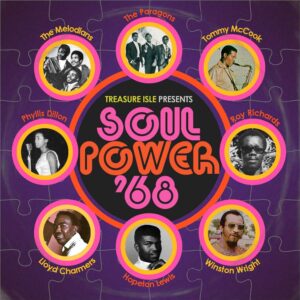 Two CD set of some of Duke Reid’s rarer productions from 1968, built around the unissued Soul Power ’68 compilation album that features Joy Landis, Tommy McCook and Hopeton Lewis among many others. Eighteen of the tracks included are new to CD and three are previously unreleased in any form. Ian Canty goes prospecting for Treasure Isle’s buried treasure…

By 1968, Duke Reid was firmly established as one of the big two in Jamaican music circles, along with his long time rival Clement “Coxsone” Dodd. He had possibly had the edge on Dodd in the rocksteady era, after a closely fought battle during the ska craze. The ex-policeman was an imposing figure rarely seen without a firearm on his person, but even so, singers and players flocked to his Treasure Isle studio that cranked out hit after hit, knowing that their tunes would be given quality attention. Alton Ellis and Justin Hinds And The Dominoes were just two of the many artists that enjoyed a flush of success with Reid at the helm.

Change was in the air though and this collection reflects that, in the main made up of late in the day rocksteady melodies, but also having a few proto-reggae groovers. Some of Duke’s biggest stars are not represented here – which is not to demean artists of the stature of Tommy McCook and The Melodians, but there’s No Alton, The Techniques or Justin for example, all of whom were a large part of Reid’s star-studded roster. The Treasure Isle archive has been extensively mined by compilers over the past 20 or so years, so it is nice to have a good few not so well-known offerings and artists included here.

As might be suspected from the title of this set, soul music features strongly. The Duke himself was a long term r&b fan, with the US imports in that style that he played on his sound system crucial to getting his start in music in the 1950s. At Treasure Isle, he continued to favour artists with soul leanings, culminating in his peerless run of rocksteady successes. Soul Power ’68 makes Reid’s preferences overt, mixing pure soul offerings and rocksteady tunes.

The Soul Power ’68 album itself went unreleased at the time and was only recently located in the depths of the Trojan Records archive. It kicks off in suitable enough fashion with The Silvertones applying reggae touches to a well-sung version of In The Midnight Hour, a song made famous by Wilson Pickett. The decidedly plummy voice of DJ Radcliff Butler makes Soul Power aka My Last Word different and novel and Tommy McCook And The Supersonics’ Music Is My Occupation uses Johnny Cash’s Ring Of Fire as the jumping-off point for some of his trademark fine sax. A brassy Lloyd Williams’ Funky Beat is a good example of an early toast, with spoken and singing styles combining over an r&b guitar line. What results is a very cool mixture of soul and reggae.

The Melodians provide a classic example of the rocksteady format in Come On Little Girl and it is preceded by its smart b side Work Your Soul, The Supersonics jumping near instrumental which highlights the horn section. I Fell In Love by vocal group The Conquerers is a totally charming love song and the album finishes with a super instrumental take of In The Midnight Hour, here under the name Black Power and credited to organ maestro Winston Wright And The Supersonics. Soul Power ’68 would have made a fine release at the time. The reason why it was not issued back then will remain a mystery. Maybe it was felt the soul/reggae balance might confuse new UK fans?

The LP is fleshed out on the first disc of this set with nine contemporary Duke Reid productions, plus a bonus disc with 21 further tracks from around the same time. Lloyd Charmers, under the pseudonym Lloyd Tyrell, provides a lovely bit of rocksteady in Keep Me Going and The Gladiators, who would go on to have great success as the 1970s went on, give us an early indication of their abundant potential on Live Wire.

Joya Landis, actually an American born Wanda Jean Vann, features seven times amongst the bonus tunes. All are very much in a soul vein and all a delight. On I Love You True (or So True) she gives us a truly touching vocal performance and When The Lights Are Low is an absolute beauty. She had a brief but successful recording career, scoring with versions of Kansas City and Moonlight Lover, but, after a handful of singles over a three year period between 1967 and 1970, she seems never to have recorded again. Something that is a great shame, given the evidence provided here.

The Silvertones return with Slow And Easy, where their singing talents skilfully offset against a deep trombone part. The excellent Baby Love by The Sensations opens up disc two of this set with a perfectly judged masterwork of rocksteady. It’s a pretty difficult task to follow that wonderful tune, but The Melodians’ lively Let’s Join Hands Together doesn’t go far wrong. That this collection is full to brimming with top quality vocal groups is rammed home by the inclusion of John Holt’s band The Paragons’ with the brilliantly arranged Joy In My Soul, which unbelievably went unissued at the time.

Hopeton Lewis combines the DJ style and singing well on Black Power (take 2) and provides an early sighting of the Ali Baba rhythm on his Live It Up. Phyllis Dillon’s Humpty Dumpty is a soul smasher and features Hopeton on co-vocals, their contributions making for a very exciting piece of music indeed. The compilers drew a blank in identifying both The Yardbrooms and Joey And His Group (though they hint that the latter may be linked to The Melodians), even so, the stately pace of If You See Jane and the sleepy but warm Soul Love enchant.

All things considered, Soul Power ’68 is another satisfying delve into the Treasure Isle archive. By eschewing the dog-eared (but admittedly still great) songs that have been regularly reissued over the past 20 years, it brings to light many hidden jewels that have languished in the Treasure Isle archive. The step away from pure rocksteady towards soul and r&b gives the set an extra dimension that other compilations simply don’t have and you could always rely on Duke Reid to get it spot on in the Treasure Isle studio environment. With detailed and interesting sleeve notes, Soul Power ’68 is perfect for exploring by the more adventurous reggae fan.