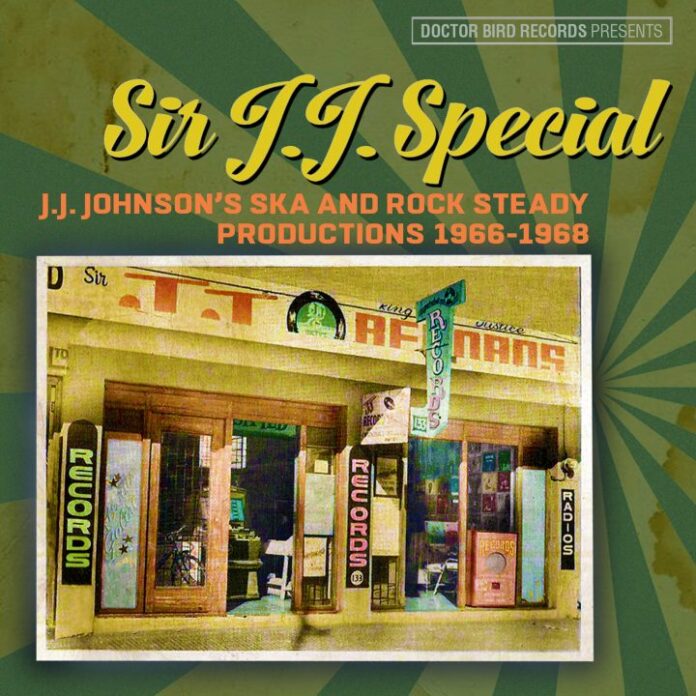 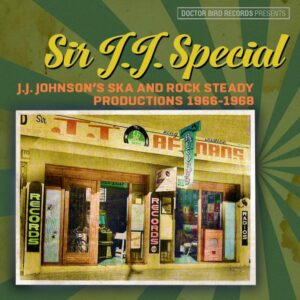 After the recent Reggae Power collection that looked at Karl “Sir J.J.” Johnson’s boss reggae era productions, this new 2CD set delves further back to his work in the late ska period and the dawning of rocksteady, with contributions from Lee Perry, the Uniques and the Kingstonians among others…LTW’s Ian Canty hears some special sounds from mid-60s JA…

Karl “Sir J.J.” Johnson’s production career was in full swing during the time documented on the Reggae Power compilation (reviewed here), released back in August of this year. Sir J.J. Special, J.J. Johnson’s Ska And Reggae Productions 1966-1968, to give it its full title, looks back to the very beginning of his studio career. The mysterious Karl Johnson had built up a successful jukebox business in Kingston Jamaica and from there had diversified into running a record shop and helming recording sessions. Though his actual studio input remains open to conjecture, again on this selection we can hear that he obviously favoured the bass guitar, which more often than not gets a chance as lead instrument to the songs.

His first time in charge in the studio yielded Lee Perry’s Give Me Justice, which is the first track presented on this new compilation. Perry is billed as Lee “King” Perry, being before he took up the Scratch epithet and though this recording is a bit on the rough side sonically, this is a decent cut and another of his ska records that chided whoever had wronged him that particular week.

One of the big plusses of this new collection is the chance to hear more from the excellent Carl Dawkins, who shone so brightly on the Reggae Power set. Though prison time meant that his progress was banjaxed at the time, thankfully that has all been put behind him and he still records and gigs today. He’s in fine voice on all his contributions which feature on the first disc of this set, including a tense and thrilling Hot And Sticky and the very cool funk-tinged Hard Time. The Uniques are only represented by one track, but they show the prowess that would make their name on the lithe and rhythmic Evil Love.

Obscure duo the Rulers also pepper disc one of this set with quality. Their biggest tunes were probably the “Club Ska 67” classic Copasetic and Wrong Emboyo, their version of the Stagger Lee tale that was later covered by the Clash on London Calling. Both are present here in their nine efforts stretched across both discs. Very little is known about the pairing bar that Wrong Emboyo was written by Clive (or possibly Clyde) Alphonso and they seemed to have been backed on these cuts by the Carib Beats. But they enlightened the rocksteady era with other singles for J.J. like bouncy and addictive Don’t Be Rude, which lyrically dealt with the Rude Boy panic of 1967 that gripped Jamaica.

Earl Lowden And The Fugitives seem to have only recorded for J.J. and faded away from the scene not long after the sides set down here in 1966. They utilised the abundant skills of Tommy McCook and his band the Supersonics on these late ska-era recordings, with the R&B horn blasts of I Need Your Love (So Bad) and the fast and impressive People Of Today being my picks from their four cuts. The Carib Beats provide the excellent novelty tune Addams Family Ska, which (you guessed!) mines the US TV show of the same name for inspiration and they also back the Viceroys on two groovy cuts Nosey People and Innocent Man. While it’s not entirely certain that these are the same Viceroys that recorded later for Coxsone Dodd and consisted of Wesley Tinglin, Daniel Bernard and Bunny Gayle, it is more than likely that the sides included here were their earliest recordings.

Moving onto disc two, The Kingstonians were one of J.J.’s really big turns and they feature first on disc two here with their very catchy and successful debut single Winey Winey. This Jackie Bernard song was a big hit in JA and it set the vocal trio on course for a good run of success with Johnson right until 1968, when they switched to recording for Derrick Harriott. After four fruitful years with him, they returned to record again with Sir J.J., cutting Slim Girl with him just before his untimely death in 1972. They also score highly on this collection with the smart bluesy skank of I Don’t Care, the very catchy and appropriately titled Fun Galore and the rough and ready skank of Put Down Your Fire. More Wine has some neat proto-dub effects and all things considered they prove beyond any real doubt more than worthy of their reputation as one of reggae’s leading vocal groups.

Primo Davidson and Hopeton Lewis are caught here before Lewis went onto solo success. The upbeat Your Safe Keep and the tougher Loving And Kind show as a pair they had definite potential, but Davidson’s career petered out not long after the twosome broke up. Vocal trio the West Indians also recorded as the Kilowatts and featured star in the making Eric Donaldson. As noted in the sleeve-notes, their approach bore some resemblance to Desmond Dekker and his band the Aces. It works well for them on Hokey Pokey, the cool sufferers’ song I Mean It and big hit Right On Time.

Under the Kilowatts handle they perform a smart novelty number Slot Machine with Lyn Taitt & The Jets and the more gospel-tinged reggae dancer Real Cool Operator. They also reggae-fy a couple of Sam Cooke covers, Wonderful World and Bring It Home. Taitt & The Jets show their chops on Soul Food, and the Soul Leaders give us the top quality Pour On The Sauce and the deep and emotional Beauty Is Only Skin Deep. They also recorded for Sir J.J. as the Inspirations and are featured on the strongly R&B flavoured cover of Barret Strong’s I Need Money.

Later recording extensively with Lee Perry in the late 60s/early 70s, soloist David Isaacs is only represented by one cut here Music Flames, which shows the roots of the pop reggae sound he would develop further with the Upsetter. The Kingstonians round things off with another entry in the yuletide Reggae stakes, the slow festive groover Merry Christmas.

Sir J.J. Special Ska & Reggae Productions 1966-1968 locks in with Reggae Power to give a thorough and thoroughly enjoyable and listenable overview of Karl Johnson’s work, from the beginning to the sadly far too soon end. His work in the rocksteady era provided some of the best examples of the form plus the early selections in a ska mode, which all adds up to a very pleasing, infectious and dancer-friendly collection. One wonders what he might have achieved as the years went on if fate had not dealt him such a cruel blow. But even so, Sir J.J. left a lot behind for us to savour and his crucial mid-60s works are very well presented here.