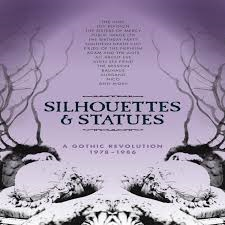 Exhaustive and elegantly housed collection of the early years of UK Goth Rock from 1978 to 1986, presented in a deluxe hardback format with an overview and pen pictures of all the artists featured. Louder Than War’s Ian Canty feels a chill in his gall-bladder and looks at the development of a scene out of its Post Punk origins, often featuring some very unlikely Goths indeed

Goth, it’s a rum business! Emerging from the UK Post Punk scene and early on labouring under the handle of “Positive Punk”, it quickly morphed from low-key beginnings that centred round the Batcave Club in London to become a worldwide phenomenon. On its way it took in many other musical modes and transformed them, each one of these styles mutated for their own macabre purposes. This made it difficult to pin down as a musical movement, which I suppose could well be in its favour. Which brings us to Silhouettes And Statues.

Before we dive straight in it I think it may help first to outline the brief of this new collection. For Silhouettes And Statues it seems the intention is to present a rounded history of the development of UK Goth from its roots in the original Punk Rock explosion, right up to the time when it went over-ground nationwide during the latter part of the 80s. To this end it features a raft of big names of the genre (Sisters Of Mercy, Southern Death Cult, Bauhaus, the Mission etc), a lot of bands that acted as a prototype for the form (Joy Division, Adam And The Ants, The Damned, The Cure), a few you wouldn’t automatically associated with Goth but dabbled in the “dark side” (the Associates, PIL, Clock DVA) plus loads of lesser known outfits to provide a great deal of interest for the musical trainspotters among us.

Of course elements of Gothic pre-dated Punk, with death-obsessed ’50s US Rockabilly perhaps starting the ball rolling. In the next decade the Velvet Underground and even the Doors played a part in the development of a Gothic aesthetic, along with Alice Cooper’s more comic-book horror spin on the Stooges stage craft. These trail-blazers remained at the forefront of Goth’s muse and Nico flies their flag with Saeta on Silhouettes, but it is the UK outcrop we’re mainly dealing with here.

Joy Division provided a template for many bands to follow and it is fitting they begin things on Silhouettes with Shadowplay – the negatively exposed film of motorway traffic that was super-imposed over the band on their Granada Reports appearance in 1978 seemed to sum up the urban alienation inherent in the band. Added to that, JD’s use of arcane symbolism led to a sense of creeping doom, which would become a Goth trademark.

However, the nondescript clobber of the band would not exert so much influence on the early Goth adherent, who initially took their style cues from the look of pre-fame Adam and the Ants – lots of black plus bondage gear, with make up being a must for both sexes. Indeed Adam’s use of shock imagery and movie references would have a deep impact on Goth, as would Robert Smith’s Cure, after they had shed their (admittedly splendid) Pop Punk skin circa of Boys Don’t Cry. By the time of their contribution here The Hanging Garden they were an entirely different and darker proposition altogether.

In fact the only major musical influences on UK Goth that are really missing from Silhouettes And Statues are Adam’s Kings Road running mates Siouxsie and the Banshees and the ball of apocalyptic fervour that is Killing Joke (though many present do owe a sizable debt to them). But the real thrill of Silhouettes is in the miniature – bands that made their mark during the time documented, but their connection to Goth (or lifespan) was brief. Also there are the links to all manor of other happenings broadly under the Post Punk banner. Artists like Blood and Roses, Brigandage and the S-Haters all had connections to Anarcho and both Paranoia and the Screaming Dead recorded for Street Punk labels (Rot and No Future respectively). Portion Control and Attrition were more electronically inclined and Factory’s the Wake skirted the C86 scene.

Now at 82 tracks I can hardly go through each one and for the sake of brevity I’ll assume most of you clued-up souls are conversant with the scene big hitters like the Sisters, (Southern) Death Cult (here in both incarnations), the Mission, Red Lorry Yellow Lorry and Fields of Nephilim (the latecomers who became standard-bearers for Goth from the mid-80s onwards). Also you probably don’t need me to explain to you who the bigger names like Bauhaus (and their many off-shoots) are. Similarly as UK Decay held down the more Punk end of the movement whilst the amazingly durable Alien Sex Fiend happily electro-beated their own sweet way in a more comedy horror mode, it’s probably worth noting they are present without going into too much detail.

If you expect this to be merely a load of fancy dress ghouls making icy but strident four square rock you’re in for a surprise as an edifying sense of adventure is at play on Silhouettes. Despite its Post Punk origins the Goths had a magpie-like approach to its musical vista. “Experimental Music”, electronic dance beats, Psychedelia, Swamp Rock, it was all fair game. Thus the appeal of this compilation to more than the committed few, so let’s dive in and rummage about a bit.

For instance in the space of a few tracks on disc three here we go from the original Adam and the Ants’ spidery Punk Funk of Tabletalk, to Balaam And The Angel’s jingle bells-enhanced selection The Darklands, to the Electro Avant-Garde Psychedelia of East London’s “Difficult Music” top dons the Legendary Pink Dots, who enchant with their track Love Puppets.

The end of this middle disc has a lovely piece of sequencing too, having Penetration’s Stone Heroes (hardly the first name that springs to mind when pondering Goth, but it’s a brilliant tune) betwixt Brigandage and Rose Of Avalanche’s VU-inspired Peel fav LA Rain. Brigandage should be a lot better known (we need a proper reissue campaign of their works, starting with the classic “FYM” cassette) and if we join them here in their Post-“Rot N Roll” incarnation, Angel Of Vengeance is still full of sex, style and subversion and Michelle’s excellent voice is as strong as Pauline Murray’s (something I don’t say lightly).

Elsewhere Nevilluxury, away from his band Punilux, captures the sinister vibe of very early Roxy Music on the swell Feels Like Dancing Wartime and Louder Than War’s very own Keith Goldhanger fronts I’m Dead on their “Abbott And Costello Meets the Mummy……and the Sex Gang Children” funeral stomp of Storm Pause. Pride of place though must go to Anorexic Dread’s epic Tracey’s Burning, tottering precariously on the edge of parody for most of its nine minutes, but just pulling it off through sheer nerve and verve. The one track direct from Goth central (i.e. the Batcave), Tabitha’s Nightmare’s Heroin, is oddly 80s pop-styled and a little throwaway. But if Gloria Mundi’s weird fusing of Magazine, Ultravox and Glam made little sense in 1978, the fuzzed-up The Hill passes muster now.

Bushido were a name I only half remembered from back then but their dreamlike Among The Ruins is a pseudo-classical peach. The March Violets however appealed to me from the off, mainly because they appeared to be a Revillos for the Hammer Horror generation on their wonderful calling card Crow Baby. Flesh For Lulu display a kinship with the Gun Club with their Vaguely Human, but Hula glide through a beatbox driven delight in Ghost Rattle. Lots of different sounds and we finish with the decidedly colourful Rubella Ballet providing one of their more introspective efforts Twister, which fits the concept through the suitably spooky garbled chatter of its coda

Handsomely presented (though perhaps spindles would have been a bit easy to get the CDs in and out says our local pedent!) in a book format case with detailed notes on each track (sometimes from band members themselves), Silhouettes And Statues largely fulfils what it sets out to do, that is provide an overview of the development of Goth during that crucial eight year period. It successfully pinpoints the influential and main practitioners of the form. It also makes a case for its longevity through the innovation of the lesser lights, some with only a passing acquaintance to Goth. But that’s how it should be – Goths were nothing if not elusive. Along the 5 disc journey this collection also manages to tell an engaging story of how one important strand of Post Punk mutated over the years to adapt to each coming trend, reshaping things to their own satisfaction.

Most important of all, this compilation is a rattling hoard of fun to listen to and a mine of information is to be found in the sleeve-notes too. There are a few Goth by numbers tracks (names withheld to protect the guilty), but for the most part Silhouettes And Statues is sparky and alive with invention, quite the opposite of what one might expect.