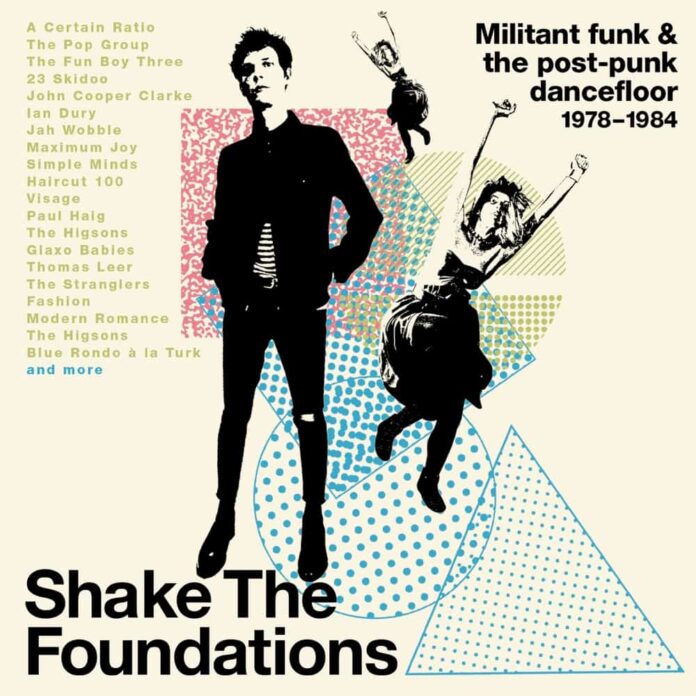 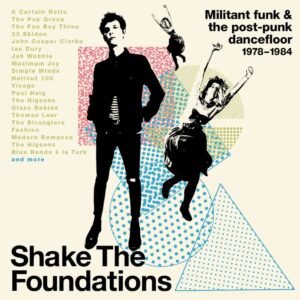 If you can get past the juxtaposition of having the gloriously sordid Nightmares In Wax bundled onto the same compilation as the Colgate clean Haircut 100 then this is a decent attempt to look back at a particularly furtive time in musical development. The initial flames of punk had subsided, but the message had been delivered; bands and artists had been encouraged to experiment, to allow all their influences to come to the fore. The result was an explosion, a myriad of styles – now neatly bundled as post-punk, many of which were heard in the underground nightclubs as DJ’s carved out their own identities on the back of these efforts.

Bill Brewster was one such DJ, having initially escaped Grimsby to the draw of the London punk rock scene, he arrived post the Clash signing to CBS, so admits he was too late. He was later a member of Group Therapy and then went on to co-write the book Last Night a DJ Saved My Life with Frank Broughton, and editing Mixmag. Brewster compiled this 3CD set and wrote the accompanying 36pg notes, all neatly housed in a clam-shell case. Obviously, all compilations are limited by licencing deals, as such Brewster admits this is not a comprehensive study, rather a ‘shakily hand-drawn’ map. The tracks are thematically arranged; the more polished material fills Disc One, Disc Two is populated by electronic experimentation, whilst Disc Three is more rough and ready.

Manchester’s A Certain Ratio open with Guess Who? which appeared on the bands 1982 album I’d Like To See You Again. Brewster acknowledges an ACR gig as being the spark needed to form his own band Group Therapy. ACR certainly spearheaded the funk direction, though the use of brass separated them from many of their peers, this has some gloriously rich bass resonating through as ACR headed in a more off kilter R&B direction. Another band to utilise brass were 23 Skidoo, who somehow managed to mix industrial, post punk, and funk into one cohesive unit. Coup was the bands 5th single, the first for Illuminated Records, and is cited as a major influence for the Chemical Brothers Block Rockin’ Beats, the ethnic drumming, the ascending brass (utilising Aswad’s brass section) the chanted lyric and the Apocalypse Now samples turned this elastin number into an Indie Chart Top 3 hit. 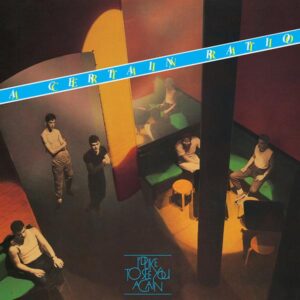 And so, to Haircut 100, no doubt dismissed as chart fodder by some; personally, I think Fantastic Day is a slice of perfect pop. Included here with the instrumental Evil Smokestacking Baby a post Heywood B-side which I had never heard before; you would never guess this was by Haircut 100, as it shimmers and glistens in a blissed-out Ibiza type vibe, which goes some way to explain why it was later utilised by Pony Express on an unofficial release in 2007.

Simple Minds are rightly included with This Fear Of Gods – this being sometime ahead of their descent into stadium guff. Jim Kerr credits this track as being influenced by Donna Summers’ I Feel Love, I’d suggest it also owes a huge debt to the Human League debut Being Boiled certainly in respect of the vocal delivery, but clearly demonstrates a band seeking to stretch themselves beyond the perceived confines of punk. Born Every Minute is the surprising inclusion from The Passage, lifted from the 1982 album Degenerates which also housed their best-known track XOYO, the track is darkly sinuous as vocalist Dick Witts, an accomplished musician, and member of the Halle Orchestra repeatedly chants the title to an apex of US funk inspired jerkiness, whilst Medium Medium actually featured on the US Dance Chart with Hungry, So Angry, though the track included her, Serbian Village appeared on the 1981 album The Glitterhouse, its sparse to the point of being taut, built entirely around the bass, with low in the mix choppy guitar, and anguished semi-spoken vocals.

Other inclusions are John Cooper Clarke, The Passions with ‘Skin Deep’ the vastly improved follow up to the hit I’m In Love With A German Film Star, and Jah Wobble with Invaders Of The Heart a track that has so many ideas, so many textures all woven into an intricate spasmodic dance tune that only someone with Wobble’s ability could pull this off. Can You Move from Modern Romance is I would suggest the bands only semi-credible track as they seem to impersonate everything from Blondie’s Rapture to the entire Sugarhill labels early output.

Daniel Ash formed Tones On Tail as a Bauhaus side project, Lions was the bands fifth single and was included on their sole album Pop. Ditching the more obvious and darker tones of Bauhaus this is built around a simple two note keyboard with hushed lyrics that is surprisingly effective, less so being What Dance Is This? from Perfect Zebra who crammed half a dozen singles and two albums into their brief career. 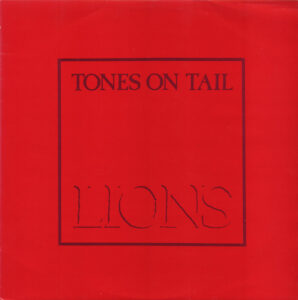 Fun Boy Three are included with Faith, Hope And Charity, the B-side to the wonderful Lunatics Have Take Over The Asylum, the song assembled around a drum machine pattern and bassline and demonstrated just how far they had evolved from The Specials. Shock’s Dream Games sounds like someone had nicked the tapes from The Sound Of The Crowd recording, they were well connected via The Blitz club, Rusty Egan produced some of their material – though I’d suggest it’s a bit of a push to suggest they were pushing post punk boundaries, likewise Big Man Restless from Kissing The Pink which came out in 1982; personally I was more attuned to the likes of Cabaret Voltaire (not featured) who with Just Fascination were making their own, far superior inroads onto the dance floor.

Frequency 7 by Visage is an interesting release, lifted from the US only Visage EP, the version here is the instrumental, a much more muscular version with clear links to the likes of DAF and perhaps Nitzer Ebb who formed some twelve months after this was released. Quando Quango were one of those groups who seemed painfully hip, pan European in makeup, signed to Factory Records and to my then teenage sensibilities losers to the likes of The Cramps and the Sisters Of Mercy, listening now it’s clear that they were far better than the likes of Vicious Pink (who I had the misfortune of see live) who scored a minor chart ranking with Cccan’t You See which with its reliance upon drum machines and as then current electronic wizardry has not fared well over the years.

Fashion was another band that relied on technology, Move On is essentially an advert for Simmons drums and Roland guitar synths set to the funk pre-set, similarly with Set Fighter from Wide Boy Awake the band formed by ex-Adam & The Ants bassist Kevin Mooney – neither artist featured on the dancefloors of any club I ever attended, though I am sure with the level of polish applied to their material and image they were a shoo-in for a feature in The Face.

Disc Three houses some real gems, including tracks from bands entirely new to me, many of these bands were limited by budget, so instead of relying upon a rack of Roland synths etc they improvised with what they had, often creating an at times bleak yet more welcoming atmosphere. Surface Mutants were a Sheffield based 4-piece who recorded at Cabaret Voltaire’s legendary Western Works studio, included here with When Are We? The B-side to their 1982 debut 7” Anaesthetic which they headed to Cargo to record as Joy Division had recorded there; the track is 39years old yet still sounds fresh, the use of space, the distinctly northern vocal phrasing, the niggling choppy guitars this could have been released yesterday! 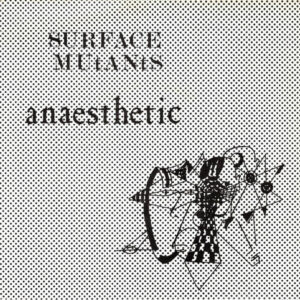 The Pop Group require no introduction, here with Rob A Bank, a tightly drawn, engulfing and joyously chaotic deconstruct of the Robin Hood theme that perfectly encapsulates all that early post punk was trying to achieve, Animal Magic eased off on the chaos and churned out some seriously bass heavy dancefloor wreckers – Get It Right was released as a single in 1982, it’s a brass tinged muscular workout, though it’s up against the sordid diamond that is Black Leather from Pete Burns pre DOA band Nightmares In Wax. I was 16 when this was released, having sneaked into one of Liverpool’s less salubrious clubs then hearing this at ear-shredding volume was an experience I recall to this day. Burns helps himself to KC & The Sunshine Band, and Iggy Pop and morphs the lot into a filthy paean to muscled men in leather “astride big motorbikes”.

The 021 released just two albums, Asbestos Lead Asbestos was from the 1984 Let’s Get Professional release, the band featured Keith Dobson (ex-Here & Now) who later formed the more successful World Domination Enterprises who put out the same track as their 1985 debut; that said the track is worth it, it’s a sort of anarcho, commune living funk, with a bass that weaves its way through the barrage of distorted noise.

Mataya Clifford was signed to Do It Records and benefitted from having Stuart Goddard (AKA Adam Ant) design the sleeve to Living Wild a decidedly funk based workout with a strong vocal chant that also incorporates patterns and chants no doubt based in the artists Zimbabwean heritage. So Many Ways from Electric Chairs was a real curveball surprise, instead of the preferred NY rock ‘n’ roll sleaze of their frontperson Wayne/Jayne we get a an off kilter electric funk shuffle with some great additional percussion and the benefit of production courtesy of David Cunningham which highlights the stuttered cold vocal delivery, another band to benefit from a name producer, this time Adrian Sherwood were London Underground here with Dreams Are Better which combines glacial dub with scratched post punk guitar, released in 1982 this was years ahead of its time. Sherwood is also involved with both The Chicken Granny which essentially mirrors the early PIL output, whilst Machine Gun Hogg & Co craft an assortment of squelches and dragged beats into something entitled Bed Bound Saga

Group Therapy were new to me, Arty-Fact is a sinewy brass tinged funked up post punk number that sadly really fails to go anywhere, similarly with The Diagram Brothers who contribute We Are All Animals, though there is a decent bass line buried beneath the vocal chanting.

Shake The Foundations is a fascinating attempt to showcase one aspect of what became post punk, some of it works and remains both relevant and influential – listen to say Drunk Tank Pink by Shame which came out a matter of weeks back and you will hear a clear lineage to some of the bands included here, as such this compilation is perfectly timed, and you can easily skip the duff bits on Disc Two!