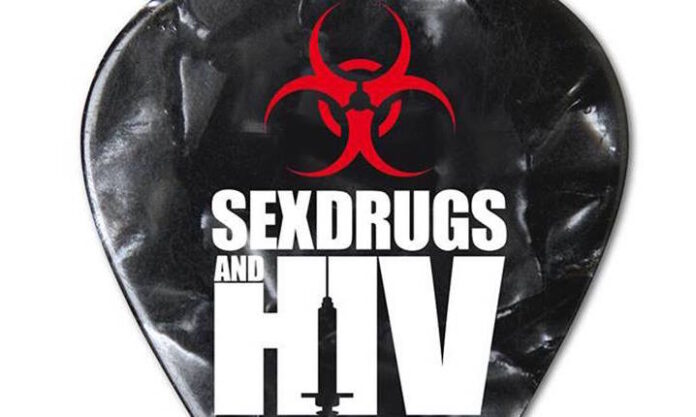 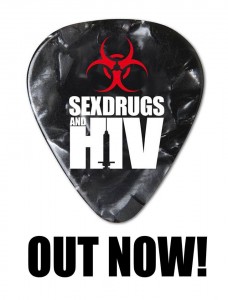 20 years in the making, Sex, Drugs and HIV is an astonishing collection of music from 200 artists, largely of a “punk” persuasion, raising money for charity. Sophie Sparham explains why this is a “must have” artefact.

Sex Drug and HIV is pretty much about as rock and roll as you’re going to get. In fact, it’s so bloody rock n’ roll it’s kinda hard to decide where to begin, but we’ll give it a go…

Mat Sargent, who most people know from the bands Chelsea and Sham ’69, has been working on the project since 1995. Now, it’s finally complete and has been so worth the wait! Mat decided to create a compilation CD for four charities. However, this compilation was different to most as he decided that he wanted to feature different artists on each individual track.

Aimed at raising the profile (and funds) for the Terrence Higgins Trust, Release, Rape Crisis and Cancer Research it’s been a 20 year labour of love to recognise the support these charities have given to people in and around the music scene.

So what did Sargeant do? He teamed up with producer (the now, late) Dave Goodman  and created an album. However, Mat hasn’t just created an album, it’s a carefully crafted two disc compilation CD with tracks that star pretty much everyone worth knowing in the music scene.

Yes, I’m aware that’s a big statement to make, but anyone who dares challenge it really needs to read the sleeve of this thing. Featuring artists from bands such as The Damned, Hawkwind, Sisters of Mercy, Killing Joke, Motorhead, Napalm Death, The Specials, Anti-Pasti and more…

As you may have guessed, since the contributors are so diverse, so is the music.

Kicking off with the title track, the slow country styled song is one of the most powerful on the album.  Showing how expressive the power of stripping down music is, it sets the tone perfectly.

Who’s Laughing Now, No Fun Here and This Modern World pick up the pace with great guitar riffs, beautifully catchy lyrics and just the right amount of distortion.

However, there’s so much more to this first disc than straight up rock and roll… even though they are brilliant! In fact, it contains a very psychedelic element that especially runs through the middle of the album.

Torched Genius is a trippy track with a reggae like ska feel to it, the haunting female vocal echoing perfectly throughout the chorus.  Sly Fox also has a strong rock steady influence and contains a wonderful trumpet breakdown mid-song.

One of the entrancing things about these discs is that there’s no pauses between each track which blend perfectly, all connected despite being so how different.

The second disc has a completely different vibe to it with brass, up-beat tunes and obvious full frontal attitude. It begins with the 2 Tone-styled Easy Target and it’ll make anyone listening want to dance.

The next songs have a rockier vibe, from the gritty female vocals of Kids of Today to the funky Pain/ Mercy, the album takes you on a rollercoaster that visits just about every corner of music.

Too Far From Me Tonight takes us into the slower elements of the CD. The track is followed by You Take Me Higher before the final section of reggae and rock n’ roll.

To summarise, my advice would be to go and buy the album for yourself. There is no possible way that you could explain the sheer brilliance of it all in one review, I mean there’s so many tracks that I don’t even feel I’ve covered half of them!

In short, it’s great listening for a brilliant cause.