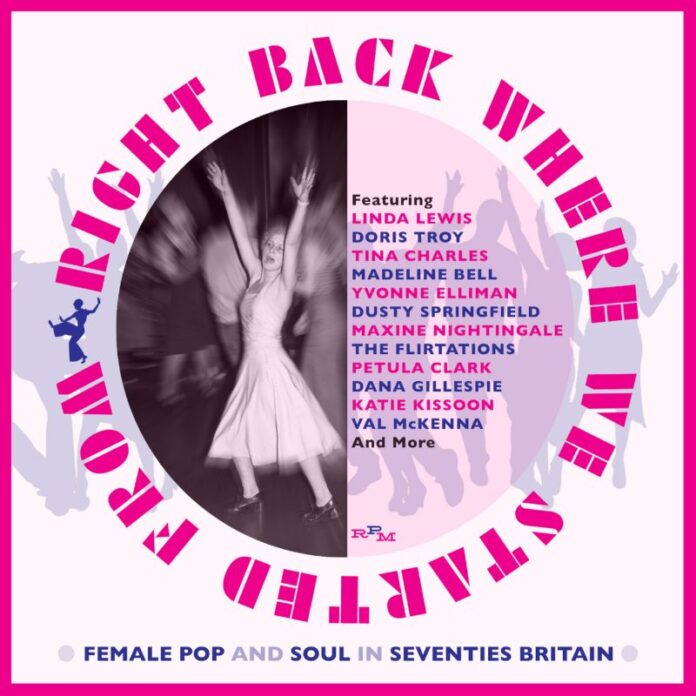 Various Artists – Right Back Where We Started From 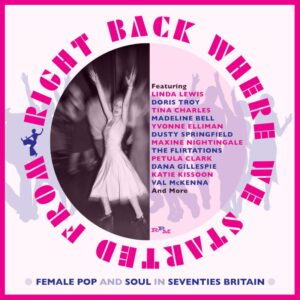 This set, sequel to the Am I Dreaming? box of 2017, seeks to compile “Female Pop & Soul In Seventies Britain”, as the subtitle goes and features Dusty Springfield, Doris Troy and Dana Gillespie among many others. The idea being how these records tied in with the Northern Soul scene that was gaining traction at the same time…LTW’s Ian Canty goes back to the well again…

What I’ve always found odd and inspiring is the way something like northern soul, which was a 1970s phenomenon almost entirely based around obscure 1960s r&b singles that came with that essential stamping tempo for dancing, could permeate through to the mainstream to eventually influence new music. Kind of “you’ve gotta go backwards, to go onwards”, as the great NY punk band Kraut once sang. But as northern soul thrived purely around the authenticity and rarity of the source material, one has to wonder who these modern waxings were exactly aimed at?

Well, the sound did crossover into the popular music charts via some not very representative commercial cash-ins (Wigan Ovation/Wigan’s Chosen Few spring to mind), so there was obviously a thirst for a similar sort of thing with pop fans who would have never even thought about attending an event at the Wigan Casino or The Blackpool Mecca. Also, the rare discs that were so prized on the NS circuit were a finite resource. The bottom of the well would one day be reached, which meant to sustain itself there would eventually be a need to replenish from new.

Right Back Where We Started From seeks to look at (mainly) rare female sung soul/pop 45s from the 1970s, some of which were put together with that Wigan/Blackpool scene in mind. Taking its name from the Maxine Nightingale hit song, this set also takes in creamy disco and funk, plus some less easily classifiable items. Big names like Dusty Springfield and Petula Clark rubs shoulders with near complete obscurities of the ilk of Eleanor Keenan and Sweetcorn, as well as hi-energy stars to be such as Hazell Dean.

To begin right back at the start, Nightingale’s title tune has a very clicky rhythm that on this listen took away a little from the song’s easy charm. It still retains an engaging allure though, but you can see clearly how the producers were taking their cues direct from northern soul here. Moving on, session singers The Playthings excel on the feelgood dancer Stop What You’re Doing and Linda Rothwell, from Bury, cuts a very cool version of Tell Me.

The Flirtations, originally centred around the three Pearce sisters, started out in South Carolina, but settled in the UK. Before their relocation, they had some 60s chart success in the States, something they could not replicate in Blighty. Even so they recorded many popular discs, including 1971’s Take Me in Your Arms And Love Me/Little Darling (I Need You) single, the latter of which appears here. This record was reissued in July 1978 as the first release on the Casino Classics label, an imprint put together by the manager, owner and one of the DJs at Wigan Casino.

Our Day Will Come finds 80s hitmaker Hazell Dean right back at the beginning of her recording career and it is a good example of a disco/soul/MOR crossover, but the beautifully judged vocal of the following cut I Want To Go Back There Again by B.J. (Brenda) Arnau is truly something to savour. She went onto various TV work and even appeared in the Bond film Live And Let Die. Mother Trucker (no tittering at the back!) were Ember’s all female rockers, a very good band I’m a bit of a fan of, but perhaps not heard quite at their very best on Explosion In My Soul. Even so it is still pretty funky and cool and the fuzz guitar on Salena Jones’ Baby Don’t Ya Get Crazy tops off an assured vocal performance and very danceable rhythm.

Doreen Chanter’s self-penned Leaving The Ghetto helps her duo with sister Irene AKA Birds Of A Feather really take off, a fiery rave up with some great organ work. The final track on this first section of Right Back Where We Started From is I Wonder What Will Happen by Carol Woods, which takes the pace down admirably in a very soulful way. This tune nicely rounds off a disc full of good-time vibes.

On disc two we find things broadening out a little from the northern soul influenced material. It’s no bad thing as it adds variety, while still keeping things pretty dance-orientated. Doris Troy’s velvety voice is utilised well on the jazz funk goodness of Stretchin’ Out, she’s not to be confused with Doris Duke who cuts a nice slice of Philly-sounding blues entitled A Little Bit Of Lovin’ a couple of tracks on. Tina Charles might well bring back memories of Betty Boo on I Can’t Dance To That Music You’re Playin’, but this is also a cracking dance tune in its own right and the squelchy synths of Born To Be Loved (By You) by Eleanor Kennan transport her a fair distance from her swing comfort zone and into the future.

Petula Clark brings her relaxed majesty to bear on the calm funker Right On and sultry 1960s soulstress Billie Davis shows she was far from a spent force in the new decade with the cool sophistication of I’ve Been Loving Someone Else. There’s some great guitar distortion on Linda Collings’ infectious dance number I’m Getting Hungry For Your Love and Sweetcorn skirt easy listening/MOR attractively on Catch Me, Catch Me. Summer Heartbreak by Patti & The Patettes clearly sought to give the Phil Spector girl group sound of a decade earlier an update, with the Flirts doing a similar thing with Give Him A Great Big Kiss.

For a finale on this section of Right Back… we get Lesley Duncan showing that she could easily take dance music in her stride on the 1978 single The Magic’s Fine. That it was all her own work in writing and playing ably displays what a major talent she was. Milly Scott finishes things off here with a good version of Polly Niles’ already fab Sunshine In My Rainy Day Mind.

By the final disc Right Back Where We Started From’s concept of northern soul-influenced pop is pretty much dispensed with. However, what we find is a fine compendium of light pop that occasionally nudges easy listening, twinned with more earthy, blues-based offerings. Starting off with Margie Miller and her burning hot funk version of Fever and the mighty Dusty Springfield’s Spooky is some way to kick things into gear. Polly Perkins went onto to star in the BBC’s ill-judged “Eastenders In Spain” soap Eldorado, but she had plenty of 1960s form as a singer/actress that also presented Ready Steady Go. As a gay artist, she was an inspiration by putting her money where her mouth was, like on wry and witty single The Bad Girl from 1973.

Though Adrienne Posta and Linda Thorson were also far better known for their acting roles (Thorson was of course Tara King in The Avengers), they both perform admirably here in the recording studio. Posta was the more prolific singer of the two, with a musical career that stretched back into the mid-60s and she was clearly very talented in that department. Her Express Yourself exudes confidence and gathers a good head of steam and for her part Linda easily handles the mid-paced You Will Want Me with aplomb.

There are a few identikit versions on the last stretch which are pleasant enough, but not exactly thrilling. However and very surprisingly, Blonde On Blonde (two “Page Three Girls” – ask your mum or dad) strike a neat disco-synth balance on Led Zeppelin’s Whole Lotta Love, whilst who would suspect Yvonne “If I Can’t Have You” Elliman fronting the proto-punk attack of Who cover I Can’t Explain? Not me but I love it. This collection ends beautifully with the flowing choral folk pop of Fly, Little White Dove, Fly by Julie Sullivan.

Like a few of these sets recently, the idea behind Right Back Where We Started From is of less import than what is actually included. The first disc here adheres most closely to the concept, but it is pretty much a side issue by the time of the later selections. Taken instead as a good quality compilation of lesser-known female fronted 1970s recordings and a follow up to Am I Dreaming?, it pays dividends. For a large part true warmth, feelgood vibes and easy danceability shines through. I found it highly enjoyable on the whole with some real unheard gems, that because they don’t sit evenly in a genre haven’t been “comped to death”. A refreshing listen and a sign of the vast pool of female talent that made their mark during the 1970s, mostly before “Year Zero” supposedly opened the floodgates.