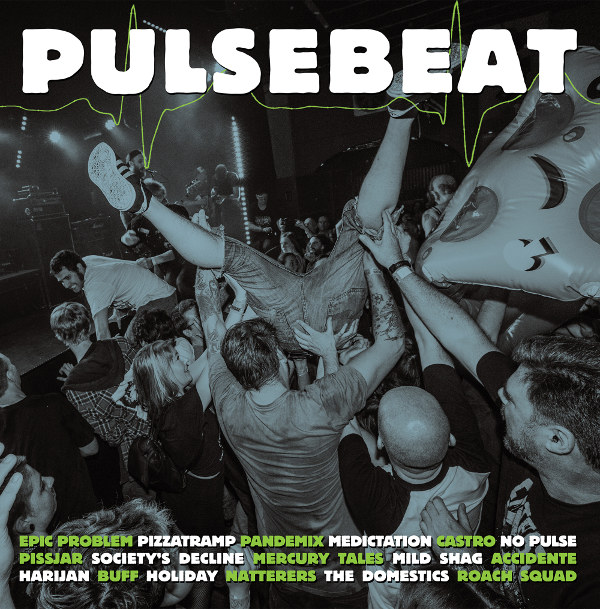 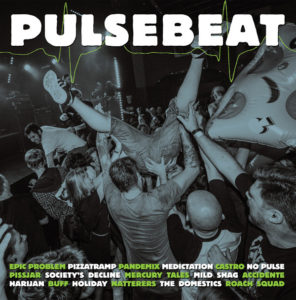 A punk and hardcore compilation pulled together by an internet radio DJ brings the discerning listener an opportunity to sample a range of up and coming releases from 7 different labels. Nathan Brown got a sneaky listen before it hits the streets.

For 2 and a half years, Wayne Elliott AKA Wayne Crippen has been unleashing a round up of new releases from the world of punk on his internet radio show Pulsebeat and occasionally sprinkling in the odd classic.  It’s become one of a the ways to find out which records and live bands deserve your attention. Having reached show number 100 he appears to have shifted his sights to rediscovering 50s classics. Back in the 80s when the Doctor & The Crippens and their contemporaries first surfaced there were only a few dedicated DIY punk labels and no internet to connect us all.  Radio, in particular John Peel, played an important role – how else would you know that a band from Scarborough have just released a banging EP on their own label, unless someone in your town or some punk you wrote to knew about it.

Now there is so much music being released we have the opposite problem. Whereas once we needed a treasure map to find the stuff now we can easily find it but the choice can be overwhelming.  Someone helping you sort the wheat from the chaff is really handy if you are not privileged enough to have the time to listen to every recommendation your mates post on social media.  Besides which some recommendations turn out to be turkeys so being able to hear them first is more and more important.  Whilst DIY print zines still have a vital part to play they always lag a little and lack the instant link to listen.  Radio shows like Pulsebeat and webzines – including our very own Louder Than War – help you to decide the direction in which you should zoom in your cross hairs.

The likeable Wayne has collaborated with 7 UK DIY labels to deliver up 17 tracks which provide a snapshot of bands that are currently dropping tunes you might want to check out.  Not a million miles from, but also very different to, the Grow Your Own records ‘Birds of a Feather’ series, it fills that same purpose that comps such as Digging In Water or A Vile Peace did in the late 80s.  Be assured it is not like those crappy Top Of The Pops albums that litter charity shops in every high street of the land.

Under Wayne’s influence Brassneck, TNS, Little Rocket and Pumpkin offered up 2 tracks each while Boss Tuneage, Urinal Vinyl and Kibou provided 3.  A few bands who are current flavour of the month feature, giving you the opportunity to find out what the hype is about, and while you can listen to bandcamp or youtube it’s just not the same as putting on an LP is it?

While the songs from different labels and the range of styles are jumbled up, I’m choosing to give you a brief tour by label.  Brassneck give us the gruff, chuggy Leatherface-esque Epic Problem (featuring Mackie from Blitz) and Holiday who would be what you got if Morrissey wrote songs for a cheerful pop punk band. TNS push forward skate thrash pranksters Pizzatramp and Harijan, a band who I was shamefully unaware of previously. They give us well played bouncealong horn driven ska with a few hardcore chuggy guitar riffs thown in for good measure. It is the only song on the comp that isn’t new and current, hailing from 2009.  The reason is to remember a friend of TNS records, Tim Gray who recorded this track among others.

Little Rocket’s contributions will be of particular interest to Leatherface fans. Medictation’s gruff chuggy rocky punk features the excellent Dickie Hammond and is taken from his last recording.  Roach Squad who are fairly slow and tuneful feature Graeme and Frankie of Leatherface on guitars. While they do not have the heaviness you might be expecting, here and there you catch a bit of a recognisable Leatherface jangle.

The remaining labels bring more of an international flavour.  Pumpkin artistes Mercury Tales are a French post punk band offering up a slow brooding 4 and a half minutes, while Accidente’s Spanish melodic hardcore has a heavy pop punk influence.  Boss Tuneage provides the midpaced noisy agit punk of Boston’s Pandemix (Mass not Lincs), with a Buzzcocks vibe floating around them. Norwegians Castro provide shouty melodic hardcore while Natterers are the latest name to be buzzing around scene watchers.  Sounds to me like a good blend of late 70s punk, anarcho-punk and a dose of hardcore to plan them in the here and now.

Upping the tempo, Urinal Vinyl hit us with the fast as fuck hardcore of Bristol’s No Pulse, and the Swedish, shouty, Poison Idea inspired hardcore of Pissjar – who I think may have just won the Best Band Name on Record prize.  They temper things a little with some nodalong punk from Buff which is infused with keyboards to give it the feel of hippy festival meets the Upstarts or the Adicts.  Noisy East Anglian shouting match The Domestics share their Kibou submission with the Swedish D-beat mongers Society’s Decline and runner up in Best Band Name category Mild Shag, whose thumping guitar strewn hardcore hails from Singapore.

It’s a mixed bag which I think is one of the great attractions of compilation LPs.  One thing that is missing from this, though, is Wayne’s dulcit tones. I think it would have been a nice touch to have a snippet of his show intro at the start and maybe a signing off at the close of the LP but I guess he is too modest – it’s all about the bands and he’s just spreading the lurve.   To hear him you’ll just have to listen to some of the old Pulsebeat episodes or his new 50s Confidental show.

Pick a label, any label, to secure your copy:

All words by Nathan Brown. You can read more from Nathan on his Louder Than War archive over here