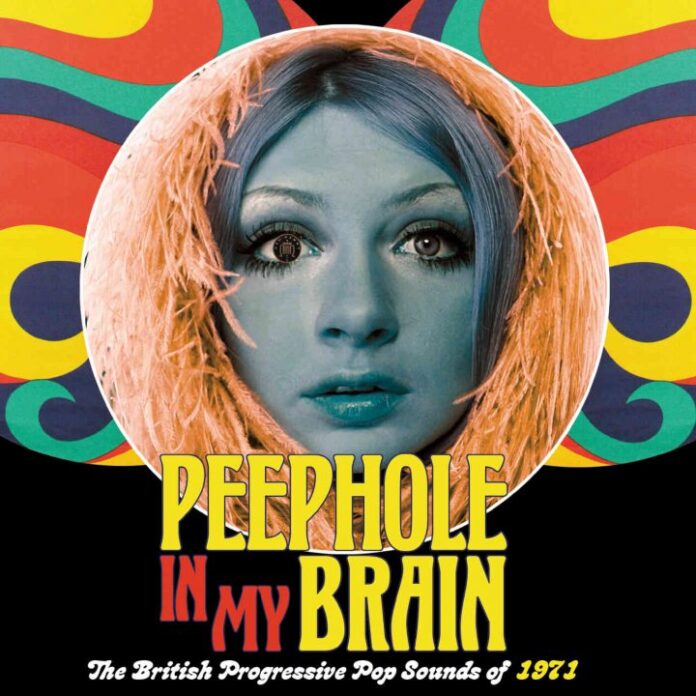 Various Artists – Peephole In My Brain 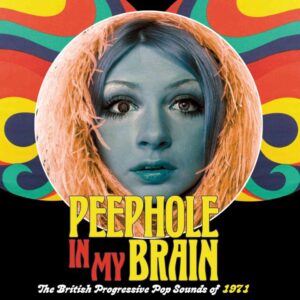 This new 3CD set is subtitled “The British Progressive Pop Sounds Of 1971” and features contributions by the Hollies, Gerry Rafferty and Atomic Rooster as well as many others recorded during that year….Ian Canty is reminded of his first musical memories as the swinging sixties retreated to the history books…

1971 represents probably the peak time for British progressive pop and it is marked by this new collection Peephole In Your Brain. Soon the UK would fall head over heels for the savage stomp of glam rock, at the start of the year only a shade more than twinkle in David Bowie and Marc Bolan’s eyes. The sound would steadily gain traction as the year went on. Eleswhere most artists looked to the recent events for inspiration, but despite the high times of the 1960s being now firmly in the past, older ideas still filtered through.

The shadow of the Beatles was still keenly felt even after their final split the year before and while psychedelia may have been yesterday’s news, elements of it were firmly embedded in the music of the new decade. Folk rock and pop styles were also still popular, the simplicity of bubblegum showed up in the pop charts and progressive rock held sway on the university gig scene. Bands regularly combined a lot of these different styles during the course of one song to sometimes spectacular effect. The greatcoated hoards may have sneered at the hit parade, but their heroes sometimes aimed squarely for them, as we shall see. Plenty of changes then, even to the money used in the UK in 1971, something that is wryly hinted at by the sleeve photo of a model with a penny pupil in one of her eyes.

Peephole In My Brian starts off with a 1,2,3 knockout combination of Dana Gillespie’s excellent Bowie cover Andy Warhol, followed by fine cuts from Kevin Ayers and the Hollies. It is difficult for me to think of a stronger way to start a compilation of 1971 UK pop. Ayers’ Strangers In Blue Suede Shoes is a winning mixture of his usual louche vocals and a pronounced VU/Lou Reed rhythm guitar attack and the result really is splendid. Hey Willy is one of the Hollies’ tougher singles, pre-empting glam and showing they still had plenty to offer after Graham Nash decamped to the States. It wasn’t a big hit for them, but a top quality offering nonetheless.

However beginning so strongly does present the problem for the remainder of this disc and the set in having to follow it. Well maybe those heights aren’t bettered, there is a lot of good things going on in the course of this section of Peephole… For example, Corn & Seed Merchants, not in fact a garden centre but ex-Mandrake Paddle Steamer, do their best on the spritely late-psych of Mr Middleton’s Lament and Stray sound atypically sensitive but very, very good on Dearest Eliose. Help Yourself’s lovely ballad Deborah is another charmer and Stackridge’s provide a neat pop hoedown on Dora The Explorer, a jolly singalong which displays the future Korgis on eccentric but fine form.

Having heard them on previous sets in this series, I have to conclude Barclay James Harvest always sound better in small doses. Like on the lush prog pop of Ursula (The Swansea Song), their more than respectable song featured here. Cressida’s piano-driven Goodbye Post Office Tower proved prophetic in its lyric, as less than a year later the song’s theme of sending a bomb to that building was put into practice by the Angry Brigade. This act resulted in the revolving restaurant at the very top of the tower being put permanently out of use, but Cressida’s chance of a hit single had gone long before.

I love the Move and though nearing the end in 1971 they could still produce gems like Tonight, despite the fact Roy Wood originally wrote the song for the New Seekers! Mickey Jupp’s early band Legend offer some proto-pub punk on I Feel Like Sleeping and Factory’s cool prog pop Castle Down The Hill is also very smart indeed. They played their last gig in 1975 at Westfield College on the same bill as a bunch of herberts called the Sex Pistols. The final part of this disc is mostly downer folk pop/rock with Peter Cowap (a mate of 10CC) provide a nice bubblegum nugget in the very basic but ultimately pleasing Safari.

Disc two opens up with one of disgraced mogul Jonathan King’s japes in Sakkarin’s clomping cover of the Archies’ Sugar Sugar. But better comes soon after with Curved Air’s Back Street Luv, which oddly sounded a little like Sparks to my ears. It was a deserved top five hit and poses the question of why we don’t hear more about them these days? Rockin’ Horse are great – merseybeat veterans that looked back and modernised that style on Oh Carol I’m So Sad with real panache and Gerry Raffety brings an ace in the sweeping folk pop of To Each And Everyone. Second Hand employ their usual rush of outrageous ideas on the soul-flecked Hangin’ On An Eyelid, with strings and keyboards giving much of the impetus. Previously Donovan’s backing outfit, Open Road’s chilled pop confection Waterwheel is lead by a bright electric piano and ex-Spencer Davis Group member Ray Fenwick gives us the highly-phased wonder Anniversary.

Ferris Street is a lightly funked-up acoustic number that comments acidic on the policy of replacing terraces with high rise flats. This social renewal was rife at the time and it is clearly critiqued by Trevor Midgely aka Beau. Don Crown & His Busking Budgies, who yes he was a busker who kept budgies to use in his act, gives us a surprisingly tough guitar on the post pop sike of The Flying Machines. You can always rely on Bill Nelson for something interesting and his track Love’s A Way is both fresh and dramatic. Anyone alarmed by the appearance of Emerson Lake And Palmer with the final selection on this disc need not have worried as Are You Ready Eddy? is a short and reasonably authentic 50s rock & roller. They might have been taking the Michael, but it still pass muster.

Status Quo open up disc three by seeming well on their way to their boogie shuffling pomp on Mean Girl, but Atomic Rooster remain a tasty proposition, hard rock riffing from John Cann contrasting well with Vincent Crane’s organ runs on the first version of their big hit Devil’s Answer. This version of the band soon split, with Cann cropping up later on this disc as part of Bullet, who offer a bit of a wake up call after a run of laidback folk pop with their nicely noisy song Hobo.

Also on disc three we have the Kinks’ superb God’s Children, featured in the film Percy starring Hywel Bennett. This it does tell you something important about the state of the UK music scene in 1971, that Ray Davies and the band were reduced to putting one of their finest offerings out as part of the soundtrack to a dopey sex comedy. Wil Malone, ex-member of psych act the Orange Bicycle and noted composer of film soundtracks including horror flick Death Line, provides chill thrills on It Don’t Come Easy and Arthur Brown again proves what a fine, no-holds barred vocalist he was (and probably still is) with Kingdom Come’s frantic Eternal Messenger. A run of decent acid folk items are interrupted by the aforementioned Bullet belter, with ex-Them singer Jackie McAuley taking things down again on the album version of his Turning Green, an item that builds up to an epic finale.

Peephole In My Brain signs out in oddball fashion with two true novelty outings. The Jona Lewie-penned Sea Side Shuffle (one of my earliest music memories fact fans!) was a big hit for the Brett Marvin & The Thunderbolts pseudonym Terry Dactyl & The Dinosaurs and an odd cover of jazz standard Billy Bailey is hinted to be the work of Second Hand. Again this says something about 1971, when the most eccentric of bands could suddenly end up as big news.

The essay that is included as an introduction to this compilation starts with two quotes from John Peel and David Hepworth on 1971’s music, one negative and one perhaps a little over-positive. Judging on this set only, I think the truth rather sits somewhere between those points. Good things were definitely happening, but the some of the changes signalled here would arguably lead to something better a few years later, something that amounted to more than a mere extension of what went on the 1960s. 1971 suffered as a hangover from those heady times and it does show a bit here. Even so Peephole In My Brain does a satisfying job of summing up 1971 UK pop music and its various strands. There’s a few big hits sprinkled around, but ones that don’t tend to crop up much on radio or tv in the present day i.e. they haven’t been played to death.

The informative booklet clues the reader in on the more obscure and fascinating tales and is nicely illustrated with some period adverts and gig ephemera. In truth I have to say I preferred the clamshell boxes these sets used to come in, rather than the flimsier card outer sleeve. Taking all this to one side, in the final analysis this collection is well presented and most importantly delivers musically. There’s a good proportion of forgotten gems and great tunes on Peephole In My Brain, all of which form an engaging and listenable history lesson.