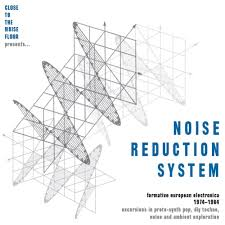 Following on from last year’s Close To The Noise Floor this new collection, subtitled Formative European Electronica 1974-84, does what it says on the tin. This one sweeps back and forth through mainland Europe on both sides of the “Iron Curtain”, on its way digging out artefacts by both the obscure and the relatively well known (Yello, Cluster, Klaus Schulze etc). Ian Canty hears that primitive eardrum buzz of a loose “scene” whose uncompromising efforts eventually wormed their way through into the mainstream……..

It was easy to realise the appeal of the synthesisers when they began to be utilised in Pop Music in the early 70s. It opened up an whole new world of sound and was said to be able to reproduce all the “sounds of an orchestra”. Initially the cost of the instrument was prohibitive and limited use to stadium acts who could afford the latest gear. As the decade wore on though, the instrument came to be mass produced and as a result reduced to a more affordable price tag. With a bit of saving up this new innovation came into the range of budding musical experimentalists all over Europe. Now anyone who did not want to learn chords, form bands etc only needed to flick a button and hey presto, they had music.

Whether synthesisers actually sounded like the instruments claimed was immaterial. They were relatively easy to operated and perfectly fit the purposes to provoke, like Punk, or groove, like Disco. The simplicity of output was totally DIY too as you only had to be able to plug in and plonk around to make your own musical piece. Quick, easy and getting cheaper by the minute. Synths could make a sound as sweet as heaven or at the opposite end of the scale, something quite hellish, sometimes in the course of the same song. This becomes apparent on listening to this new collection of those early years of European electronic/synth experiments, entitled Noise Reduction System.

Even before synths went over-ground, on mainland Europe and particularly Germany synths had already been embraced by the more outré musicians. Kraftwerk, Cluster and to a lesser extent Neu! and Can all grasped these innovations, with “Kosmische Music” looking to spread its wings away from neo-hippy beginnings. Elsewhere things intensified with the advent of Punk and New Wave, though both Throbbing Gristle and Cabaret Voltaire pre-empted Punk attitude and applied their aggression to the sound of the future. A cheap synth was roundabout the same price as an electric guitar as the end of the 70s approached and just the job for anyone wanting to circumvent the Rock Music of the time.

For instance, the Casio VL Tone had programmed electronic percussion, various instrument sounds and of course a calculator! Retailing at around twenty to thirty pounds, it found its way onto the market in 1979 just as the Punk buzz began to fade. This meant that people had something in their own home that could produce a tinny version of what Gary Numan recently had a number one hit with.

Even the Fall utilised one of the rhythms of this cheap and cheerful piece of kit on a couple of occasions (The Man Whose Head Expanded and Fortress I think). The VL Tone is used more than a few times by different acts on Noise Reduction System (in fact the track by Norway’s Famlende Forsok finish their song Trok Nok Jeg with the set tune that was pre-programmed on it), as many kinds of equipment were utilised to enhance their compositions.

The ease to operate synths opened ears and many even pressed into service other household electric items (radios were always handy in the production of “found sound” for instance) to enhance their explorations. All of which meant that all over the continent people, sometimes in groups and sometimes on their own, wildly experimented with electric sound. Though we were decades away from the Internet lines of communication opened up and like-minded folk living hundreds, or indeed on occasion thousands of miles apart kept touch, swapping cassettes of their own deranged musical visions through the good old postal service.

A godsend for these New Age Dadaists was the “Wild Planet” column in Sounds Magazine. Dave Henderson, who opened up this resource, writes a sleeve note for Noise Reduction System. He was savvy enough to see there was a great pool of talent out there, striking out in all directions and with this column sort to gave them a voice, an outlet to the “Rock/Pop World”. It would be foolish to discount the influence of Kraftwerk on the majority of this rising wave of synth experimentalists, but arguably Cluster’s Zuckerzeit (released January 1974, months before the ‘Werk’s Autobahn LP) was as vital a reference point. The edgy, slightly sinister instrumental Caramel from it could be a prototype for most every Chillwave act that appeared subsequently. It is present here, of course.

This handsome boxset, a follow up to the UK equivalent Close To the Noise Floor (reviewed here) which was released a year back, cuts across all this activity. Though a lot of it is obscure it somehow fed its way into modern dance music in particular. After all recording “found” conversation and dropping it into the mix or using it as a vocal (as is done many times of Noise Reduction System) is simply a crude version of sampling.

Most tracks here are either edging towards Synth Pop or the heavier Industrial sound, though some mix the two. Indeed the first track, Die Gesunden’s “Die Gesunden Kommen” (loosely translated as “The Healthy Ones Are Coming”) does just that, harsh metallic noise giving way to a bracing piece of Electropop. Disc 1 and 2 feature many tracks that, beneath their rough and ready electronic trimmings, are insanely catchy. TV Treatment by The Neon Judgement, seemingly put together on a whim, is a driving Electro Punk/Funker and Ruth’s Polaroid/Roman/Photo, appearing in an instrumental version, a lovely serving of spooky, frosty Pop.

Often when the artists were piecing together their tracks the cheap DIY nature meant random object were pressed into service: Trues De Groot utilises as Tampax box as a bass drums on NY NY and a child’s Speak and Spell toy is pressed into act as a vocalist on Christina Kubisch’s contribution named after said machine. Malaria were fairly well-known on the New Deutsche Welle scene and their song Geld comes on like a Sci Fi Slits, thrilling and subversive.

Doxa Sinistra’s insidious Soviet Invasion explores the synthesiser’s unique ability to conjure sounds that evoked late Cold War terror and on the other side of the Iron Curtain Yuri Morozov squelching bleeps/beats are the perfect soundtrack for totalitarian alienation. If you were not aware already through his mind-blowing work with Aphrodite’s Child in the 60s, Vangelis is not quite the MOR character you might expect from his hits with Jon Anderson of Yes. Here he provides a perfect piece of paranoid Electro with Multitrack Suggestion.

Disc 3 tends towards the more Industrial sounds – the relentless grind of the factory evoked in Maurizio Bianchi’s Industrial Tape 3 Extract being a textbook case – sometimes though, like on Die Form’s Sexual Discipline we move from ear-splitting whistles through to primitive and distorted dance music. The best of this disc for me is left to last with electronic music pioneer Klaus Schulze’s huge Space fantasy 1984 and the incredible Stoned by Gunner Moller Pedersen. Dating from 1974, this composition takes Jacques Jean Perrey’s Mood Indigo and turns it on its head, producing and alternately watery and creeping effects. It is truly one of a kind.

On the last disc of the set Belgium’s Front 242 are featured with their 1981 track Principles. This neatly displays their bringing together of hard industrial sound and dance beats that would make their name. Although in 1981 the EBM scene was decades away, they pioneered the format right here. Les Vampyrettes were the collaboration of two German music legends Conny Plank and Holgar Czukay and their Biomutanten is a synth psych horror story of the kind of high quality you would expect given the participants. Dutch band Minny Pops recorded for Factory and their song Son nicely rides a kind of Suicide rhythm and Walt Rockman (not his real name) dips into the BBC Radiophonic Workshop sound on Plancton. Cosmic Overdose’s Romantic is a great way to finish off, the kind of neon-lit torch song Soft Cell excelled at, a beautiful piece of chill-pop.

I’ve skimmed across this through necessity here – the stories of the 61 tracks/artists are told in detail in the exhaustive and interesting sleeve-notes and the joy here is in the detail. But what I can say is that each track represents part of that initial network of brave (often literally in the Eastern Bloc countries) electronic pioneers who found a lifeline through like minds spread across the continent. Whereas Rock “n” Roll at this stage was more about reassembling what had gone before into something different, these bands and artist struck out for something wholly new that used technology to produce cutting edge sounds. The influence of which goes on down the years.

An excellent job has been done by the compilers of Noise Reduction System in documenting a pivotal but obscure time in the development of Popular Music. Much of this fed into the Pop of today, whether it be on the Dance scene or via its Electronica wing, but the original intention was just to push the then new technology into unexplored areas.

Noise Reduction System casts its net across ten years and many countries and if Electronic Music hotbeds (if that term can be applied to a sometimes chilly musical vista) like Germany and France tend to dominate, bands from Portugal, Latvia, Romania and Slovenia all get a chance, resulting in a thorough survey of an intriguing and crucial time, often carried out often in the most chastened circumstances. Their motivations may have been diverse, but they all wanted to progress things onwards. Which just goes to show that despite all the negative spin, we see that one can make a difference, given the mere appliance of science and a thirst for the new.