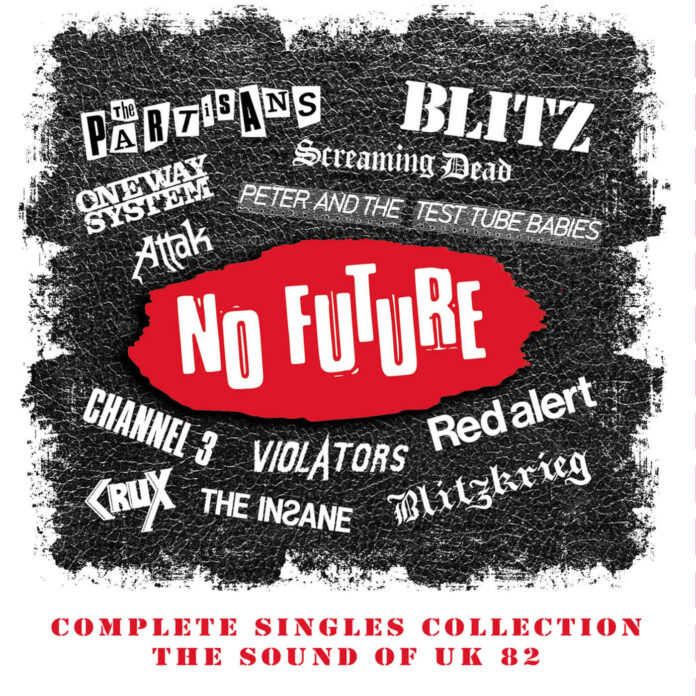 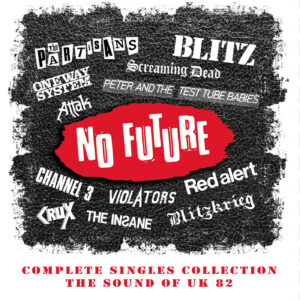 New 4CD collection subtitled “The Sound Of UK 82”, this set does what it says on the tin, every single side the No Future label released including waxings by Blitz, Peter And The Test Tube Babies and the Partisans……Ian Canty journeys back to a time and a place were no-one ever mentioned UK82 except the Exploited…..

When Chris Berry and Richard Jones launched the No Future label in 1981 was very much a case of being in the right place at the right time. Though other imprints like Rondelet and Riot City had picked up on the new punk bands sprouting up all over the country in the early 1980s, there was still a wealth of untapped talent. Sounds magazine and Garry Bushell in particular had been the big supporters of these kind of outfits, so when Berry placed an advert there for punk and skinhead bands to send tapes the response he received was immense. Demos flooded in from far and wide.

Operating on a shoestring, No Future would receive demos and if they passed muster (early on at least) they went straight to release without any re-recording. The first record the label released was an example of this: the great Blitz demo they were sent was released as the All Out Attack EP and made a huge impact. The next single, the Partisans’ Police Story/Killing Machine followed it to the higher reaches of the independent charts. A Country Fit For Heroes (catalogue number Oi 3 – the Oi prefix followed on for most of the No Future records, apart from the Wall’s Day Tripper mini-LP and the Screaming Dead, who preferred Skull instead) was a bit different, a 12 inch compilation EP with a dozen tracks again culled from demos. Like the previous two records, it hit the top five of the indie charts.

Singles followed from bands like Red Alert, the Violators and Attak, with most of them being good sellers and Blitz quickly becoming very popular indeed. They eventually made a splash in the national LP chart with their debut album Voice Of A Generation. With perhaps a touch more quality control than their competitors, No Future found their niche near the apex of 80s UK punk.

The first disc here takes in the initial six singles plus the A Country Fit For Heroes EP. The two Blitz 7″ are first rate, full of relentless fuzzy street punk and musical muscle. It’s little wonder they were so highly rated. On the other side of the coin Attak seemed to be a little undervalued. Yes a similar sound to their “big brother” band Blitz with a slight tinge of gung-ho metal riffing, but for me they produced nearly as many excitingly raw sides as their more vaunted neighbours. Their qualities are heard here to great effect on Today’s Generation. Police Story by the Partisans is an explosive cracker and the flipside Killing Machine another thrilling 100 mile a hour tear up.

Again there’s a tendency to see Red Alert in the shadow of Blitz etc, but their In Britain single is instantly memorable and captured the vibe of the times well. This song is bolstered by a couple of very good b-sides in Murder Missile and Screaming At The Nation, their mix of Upstarts/Sham influenced street level punk at its most potent. Peter And The Test Tubes’ Banned From The Pubs is one of their better recordings too.

The middle of this disc is taken up by A Country Fit For Heroes and there’s a lot of good, basic punk rock fun to be had here. The Violators show their class with their two tracks Die With Dignity and Government Stinks and One Way System are represented by an almost jangly and thin version of Jerusalem, something which is a world away from their more muscular recordings for Anagram. Distortion live up to their name on the frantic rhythm of Action Man and Whose Bomb by Chaotic Youth oddly has an early Fall style of momentum about it. This part of the set finishes with the Razors In The Night/Never Surrender single that underlined Blitz’s potential, Today’s Generation (along with a couple of more than decent b-sides from Attak in Hell and No Escape) and two solid items from Blitzkrieg’s Lest We Forget EP (the other two begin the next disc of this set).

On disc two the label had really hit a fine run of form, issuing a number of top quality punk singles. They’re pretty well known to most acquainted with 1980s punk, but that doesn’t make them any less enjoyable. If the Insane had a period of stability rather than the kind of ructions that eventually saw two outfits with the same name operating at the same time, they might have done good things if the El Salvador EP was anything to go by. The title cut is a churning punk tune given a real shot of aggression, with the “Johnny Rotten sings Johnny Thunders” of their version of Chinese Rocks and sneery Nuclear War good too.

The Partisans excellent 17 Years Of Hell, Channel 3’s I’ve Got A Gun (licenced from Posh Boy in the US), Attak’s Murder In the Subway and Dead Hero by the Samples were all great singles with good flipsides and Red Alert’ s Take No Prisoners is not that far behind either. Factor in the Violators’ incredible Gangland, which brought a wider mix of influences into something that didn’t alienate the punk crowd and you really have something. Warriors by Blitz was another first rate waxing and at one stage it looked as though they might cross over to the mainstream charts with it. The last few tracks on this disc are four songs from Crux, who shared an EP with Crash. Their offerings are pretty standard punk/oi and though ok, pale in comparison in the fierce company that had gone before.

By the time we reach disc three of this set things were beginning to cool down. Blitz had played a chaotic gig at the 100 Club which stopped their momentum in its tracks. Mackie the bassist left and they began styling themselves away from the hardcore punk that made their name and more towards the sound of post punk alienation. The new Future label would release their material (along with the Violators’ final single in 1983), whilst Red Alert and new bands (to No Future) the Wall and the Blood remained on the parent imprint. A second volume of A Country Fit For Heroes emerged from the demo tapes too.

Starting with four spirited numbers from the Crash split with Crux, next comes the classic Violators single Summer Of ’81 and its pleasingly gruff flip Live Fast Die Young. Red Alert’s last No Future seven inch City Invasion isn’t bad either, but is hampered a tad by a somewhat woolly production sound.

A large chunk of this disc is given over to the Day Tripper mini-LP by the Wall. Finding the band whittled down to a core duo of Andy Griffiths and Rab Fae Beith (augmented by Claire Bidwell and the mysteriously credited Mean Axe Al on bass and guitar for a couple of tracks), this record still manages some of the dark majesty that the Wall conjured up at their best, with Ceremony, the galloping beat of Industrial Nightmares and Spirit Dance’s explosive momentum being the most effective. Of the two covers they fear best on Slade stomper When I’m Dancing which is given a good work out. The Beatles’ title track is a fairly straightforward reading. Nevertheless this was a pretty good outing for the Wall to go out on (they split soon after).

The Blood’s Megalomania three tracker does a decent job of updating the sound of the early Damned for the oi! 80s, but after that the rest of this disc is given over to half of the second Country Fit For Heroes comp 12 incher. Though not quite the equal of volume one, there was some decent stuff included of the first side of the original vinyl, which is what presented as part of disc three. On Parole’s Condemned is a strangely touching song of the eternal outsider and Eastbourne’s Criminal Damage answer the question “what would Slaughter And The Dogs sound like at 78 rpm?” on their shout-along Criminal Crew. It’s a shame we didn’t hear more of Patrol who impress on their two numbers, with the catchy Nurse Nurse being something of a gem and Government Lies’ Did He Or Didn’t He? is nice crunchy r&B overdriven into punk.

On the final disc of this set we welcome in new signings to the label Screaming Dead and Blitz spin-off band Rose Of Victory, plus a view of the Violators and of Red Alert’s final No Future recordings. Firstly though we pick up the second half of A Country Fit For Heroes 2. There are less thrills here, though Country Boy Rocker by ABH is quite catchy and Intensive Care’s Ghost Town a pretty effective punker. The No Future debut of Screaming Dead, the Night Creatures EP, is hampered by a duff sound which robs the tunes of much of their guts. A real shame and Rose Of Victory’s Bowie cover Suffragette City a throwaway novelty effort more for Blitz completists than anything else.

It’s fair to say this section of the set is probably the weakest, which mirrors No Future’s and UK Punk’s decline as the middle of the 1980s approached. Having said that Red Alert’s There’s A Guitar Burning is a noble attempt to broaden their appeal, with the atmospheric Tranquillity and The Revolution Will Come being my picks. The second Screaming Dead EP has a vast improvement in its production, letting the band really take off with some real fire in songs like Valley Of The Dead and the Rolling Stones cover version title track. It is fitting that this set ends with their song called Warriors (an infectious and attractive Screaming Dead effort), with the Blitz effort of the same name perhaps marking the peak of No Future.

You never heard the term UK82 at the time and I prefer not to think in terms of that or the rather silly in 2020 Punk 1977 versus Punk 1982 arguments that still rage on. Sidestepping those particular kettles of fish, what I heard here was really just some exciting, ultra-distorted and angry garage bands, whatever the time frame (put the word “nuggets” in there if it makes you feel better).

Though not the “dustbin of punk” as Riot City were once dubbed, No Future did work on a budget and the cheap and cheerful presentation of this set reflects the label’s modus operandi. Having said that the booklet that comes with the set is pretty accomplished, with an introductory essay from Andy Peart, band line-ups and sleeve photos from each single. An exhaustive set which covers everything, like me you may well be surprised how many of the singles released by No Future have stood the test of time real rather well.