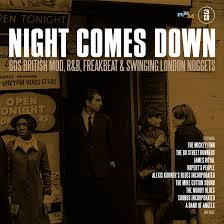 In the tradition of RPM’s “Looking Back….” collections here is a new 3CD compilation of rare but prime 1960s cuts subtitled “60 British Mod, R&B, Freakbeat and Swinging London Nuggets”….Ian Canty traces a line through the those turbulent times from Jazz-tinged R & B through to the early Progressive times as the decade drew to a close

It’s a bit like Christmas coming early for 60s buffs when RPM provides us with one of their excellently researched and sequenced selection boxes like this for our pleasure. Night Comes Down does lean a little more heavily on the Soul/R&B than past efforts but there is also a fair amount of Freakbeat and general oddness too (sometimes all in the space of the same song) that will keep everyone happy. The compilers as ever take us on an alluring journey through those crucial ten years but always take the scenic route: the only Beatles, Kinks and Who you will hear here are cover versions and there’s no strict genre rule followed. After all there wasn’t such a thing as a “Freakbeat band” then: most 60s groups dabbled in lots of areas, as shall become evident as we proceed.

We’re dealing with the kind of stuff that didn’t make the charts and although that is a large part of the appeal now for the collectors and true believers (though big names the Moody Blues and the Spencer Davis Group are here turning in some of their more obscure sides), the cause of their failure in commercial terms on the whole had nothing to do with anything lacking musically. Most were easily catchy enough to be hits back then, but for one reason or another they didn’t make it. All the way through there’s plenty here to get you on your feet grooving, you whistling along or tapping your toes, as is your want.

Seeing as this collection loosely follows the time-line of the 60s from one end to the other, it makes sense to travel through the discs one at a time. So we begin, logically, at the start of disc one where kicking thing off we have one time MOR chart topper (with How Much Is That Doggie In The Window) Lita Rosa’s high-stepping big band Mama recorded in 1962. It’s clear that we were on the verge of some big changes in the UK pop scene as someone who was more involved in novelty previous is now making moves towards the Mod market.

Then the (to employ an overused term but here it is apt) genius Laurel Aitken proves that there was much more in his locker than just Reggae with Baby Don’t Do It being some rump-shakin’ R&B with some lovely Hammond organ touches. Later to become better known as a DJ, Alexis Korner modernised things by letting a little Beat into his usual Blues Incorporated on Taboo Man and Mod kingpins Mickey Finn and the Blue Men take the old R&B standard “Pills” (probably best known via the New York Dolls cover) and gave it a hot shot of Ska with future Led Zep man Jimmy Page unusually blowing some harp instead of his guitar. Whatever, it is a delight.

The obscure A Band Of Angels (containing Mike D’Abo, who took over from Paul Jones as Manfred Mann singer later) provide some aggressive and driving Beat on Gonna Make A Woman Of You and the Attraction’s moody, Moddy She’s A Girl is a no-holds-barred Garage winner (more from them later). Lemmy’s first band the Rocking Vickers provide us with a snarling take on the Who’s The Kids Are Alright, changing the title to It’s Alright in the process. But it’s not all about the boys as we get some booty-booting female rockers too, like the Lulu-with-attitude of Glenda Collins on You’re Gonna Get Your Way and Morrissey’s one-time obsession Twinkle’s What Am I Doing Here With You having some great spiralling guitar.

Disc 2 finds us in the middle years of the 60s, with Psych seeping in but pure, sunny Pop also coming into play. The dramatic Beat of the Outer Limits’ Just One More Chance gives us a pointer that things are changing which the Favourite Sons make explicit – their Freakbeat stormer throws in a bit of the Stones’ Satisfaction for good measure. If the Reaction represent glistening 60s Pop with the horns-led Falling In Love With You, Andy Ellison’s pile-driving Arthur Green is everything that his band John’s Children threatened to deliver but often didn’t (though their corker Come And Play With Me In The Garden crops up on disc 3) – fantastic Proto-Punk, a real treasure.

Al Saxon’s East Side 628 sounds tailor made for the Northern Soul scene despite a unexpected Psych break and the Attraction cut a neat version of Ray Davies’ Party Line that starts exactly like Hanging On the Telephone! Again this section is a whistle-stop tour through the sounds of the mid-60s when Pop modes intersected to provide the stunning results we have here.

By the time we reach disc 3 the “progressive” sound is beginning to show its hand, but in stranger ways than one might think. The Deviants, they were proto-Punks weren’t they, like our Stooges or MC5? Well possibly, but on the offering here Fire In The City they offer a cool piece of Soul with would you believe a nice trumpet solo! Following suit is Arthur Brown, mainly famous for having his hat catch fire, so one tends to forget that he actually had a great voice. I’ve Got Money, a real Soul growler, demonstrates his vocal talents excellently. Noel Redding’s Fat Mattress also play against type, with I Don’t Mind being a streamlined bit of 60s Summer Pop.

Away from the bigger names Mike Stuart Span offer their Psych-Freakbeat classic “Remember The Times”, Sun Dragon gives us some terrific 60s Pop Sike in Peacock Dress as do Sounds Incorporated whose How Do You Feel also utilises a startling odd electronic effect. The Gnomes Of Zurich edge towards that progressive sound on Second Fiddle but as a total opposite the British Lion Orchestra (also on disc 2 with Big Bare Beat) proffer their Jazzy theme to the Marianne Faithfull flick Girl On A Motorcycle. Putney Bridge bring the whole collection to a fitting close with the cool strut of The Meaning Of Love.

All I can do in this review is tell you about what I think are the highlights, it’s just scratching the surface. But then again half of the fun of the thing is diving into it yourself, there’s much to hear, see and appreciate. Compiled by the taste-masters at RPM, there are relatively few out and out duds and plenty that you will wonder quite how you’ve missed out on. Also as usual you get the lowdown on each artist via a comprehensive booklet and the whole thing is presented in a nice clamshell box. Anyone who likes a bit of 60s stuff would do well to check this out, along with Soul fans and people just interested in a good tune that was a little off the beaten track so to speak. Night Comes Down shows no signs of barrel scraping at all, offering a fresh and authentic trip through that turbulent decade by the way of some terrific tunes and sounds. Bravo!