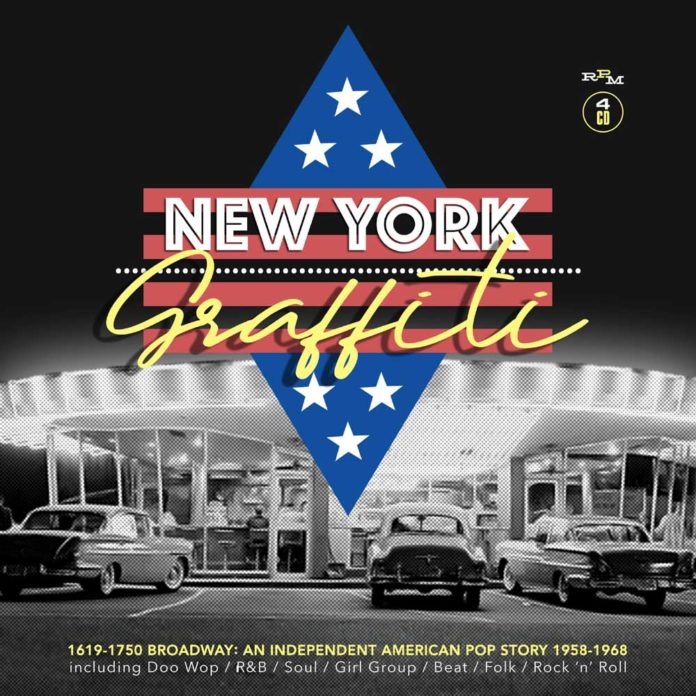 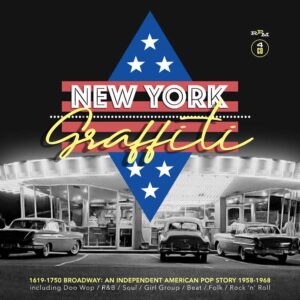 Boxset subtitled 1619-1750 Broadway An Independent American Pop Story 1958-1968. This set looks at a turbulent time in US pop music viewed through a cluster of labels that came under Edward Kassner’s auspices, including most prominently the Broadway label (founded in 1914) and the President imprint….LTW’s Ian Canty sees the writing on the wall on a whistle-stop ride around the Big Apple, from rock & roll to the dawn of psychedelia……

The Brill Building, situated near New York’s Tin Pan Alley, has traditionally been at the heart of the US music business. Though there is a tendency today to just think of it in relation to the likes of Ellie Greenwich, Burt Bacharach and Carole King, it had held sway as the pivotal point for US music since nearly the beginning of the 20th century. Originally kicking off by selling the sheet music to the crooners’ big songs, the Brill Building became the central point of music publishing and the surrounding area housed many songwriters’ offices.

These 9 to 5 tunesmiths clocked in and out like the average joe, using office hours to try to pen something that caught the zeitgeist. Then they could send to the pluggers (also located nearby) to place with an artist or band and wait for the pay check to come in. These music publishers branched out with their own independent record labels too, keeping everything “in house”.

Even with the advent of rock & roll things didn’t change much. Very few artists wrote much of their own material and the value of the song was still key. Elvis, the scene’s figurehead, never wrote his own stuff and he utilised the talent from the Brill pool himself. So things were pretty much as they ever were by the time this new set New York Graffiti (an obvious but fitting allusion to George Lucas’ American Graffiti flick) begins in 1958. At this point Edward Kassner, an Austrian entrepreneur, had begun to mop up a bundle of these labels including the long-standing Broadway imprint and the President label. The latter would eventually become the spearhead of his activities. The empire he built provides the basis for this New York Graffiti compilation.

Among the rare tracks on this compilation there’s also the odd big hit, like disc two’s Bobby’s Girl by Marcie Blane, which hit the top five in both of the big charts in the US. A quick fire UK cover by Susan Maughan met with similar success here. Disc one has the rockin’ doo wop of Shout! Shout! (Knock Yourself Out) by Ernie Maresca. People on this side of the Atlantic may know the song through the late 70s cover by Rocky Sharpe And The Replays, but it was a top ten smash in America in 1962 on its release on the Seville label (another one in the Kassner stable). The focus here is on the more obscure though, cutting across doo wop, rock & roll, blues, soul, folk and MOR pop, with beat slowly making its presence felt as the compilation moves through the ten years documented.

The first disc of New York Graffiti concentrates on the tail end of the 50s, when rock & roll, doo wop and r&B met pop head on, something which would endure pretty much through the first years of the new decade too. Very much the kind of music you might hear as background sound in an episode of Happy Days, but that is not to criticise, as these tracks tend to retain at least some of their freshness (something that overplayed “oldies” on the whole do not). It was a sound that pinpointed the first surge for attention and youthful rush of the teenager unleashed, a simpler time when one lived for the next hop dance and/or that special someone. A world that see-sawed from high, wild times to desperately broken hearts.

The Jodimars’ Story Telling Baby is a rockin piece of big-voiced blues and Ronnie Mitchell delivers a spirited performance on both Boca Raton and But Are You Sure. There’s a fine, sad song of regret by the Five Fleets called Pitter Patter which shows that Doo Wop still had a place in US charts and hearts and Earl Wade’s Feel So Bad has a real cool bass sound, raucous sax and tough rock & roll drive. A real surprise on this disc is Jamie Horton’s Oh Love (Stop Knockin’ On My Door) which sounds like a very early attempt at folk pop/rock with a country twang.

While disc two moves us firmly into the 60s, the US pop market stayed roughly the same as it was in 1958. Things would change later in the decade, but for now early soul/r&B and rock & roll were still the raw materials from which pop hits were mined. If the rough edges were smoothed off mainstream ears, it sometimes resulted in magic. Table tennis champ Curtis Knight would later involve himself in the career of Jimi Hendrix, but here he manages to provide us with the brassy and fine When You’ve Got Love. Millie Foster’s Love Wheel is supremely soulful and the tough blues of Lovin’ Time by Sleepy King has a sweetly judged piano line.

Neil (Diamond) and Jack (Packer) had formed as a duo at high school and if I’m Afraid was a little too cosy, Till You’ve Tried Love is an effective tilt at the style the Everly Brothers made famous. Diamond would of course go to massive fame solo later in the 60s and 70s, after a stint in the Brill Building itself. Some great organ work helps the soulful Tell Me More by Scotty Carrol please and the Brandywine Singers’ harmony vocals help answer the question “What would the Beach Boys sound like as a folk act?” on their Summer’s Come And Gone. Members of the band went on to feature in the Hillside Singers who had a big hit with I’d Like To Teach The World To Sing.

By the beginning of disc three of New York Graffiti a sea change was on the cards as the Beatles made their move towards worldwide success. After the Fabs’ appearance on the Ed Sullivan Show things would never be the same, as having a built-in songwriting team became the default setting for every budding beat band. This would eventually be the death knell to the Brill Building method of outside songwriters supplying bands with hits, but would hold some traction still through the Psychedelic era. For instance, most of the Electric Prunes’ debut LP was written by the team of Nancie Mantz & Annette Tucker.

For me with is the best disc of the set, with loads of interesting, catchy and danceable material. Millie Foster is back and hits us straightway with a stunning Don’t Think About You. Her What A Thrill, also featured here, is excellent too and her full-bodied vocal style helped to give the record a deserved second life on the Northern Soul circuit. Terry And The Tunisians live up to their great name with a neat piece of Doo Wop-influenced pop, male bass contrasting with female lead vocals and somehow a flute is squeezed in too.

There’s a delicious surf/Christmas cash-in by Zeke Sheppard in Snow Surfin’, all built around the Surf City riff and the Sillaways’ demo of Get Lost is a real find – a no-nonsense girl group giving an erring boyfriend the heave-ho in great fashion. It’s a real shame that they only release one single. Another forgotten ace is the Pageboys’ When I Meet A Girl Like You. Actually this was Kinks Manager Larry Page “The Teenage Rage” and fellow producer Danny Kessler in a purely one-off studio outfit. It has a great stomping rhythm and freaky guitar line and the flipside I Have Love wasn’t too far behind either. They may have been a beat bandwagon jump, but they were a good one. Finally the Barbarians, known for their homage to their one-handed drummer Moulty (from Nuggets), impress with a surf/beat crossover on both You’ve Got To Understand and Hey Little Bird. The latter, with its proto-Iggy vocal, just wins out for me, but they’re both smart enough.

Ironically on arriving at the final disc, which documents the later post-beat years, we’re given two pretty MOR items that could have easily emerged at any time after the war in Billy Butterfield’s trad jazz number The Dixatay and Billy Duke’s naff cover of Bing Crosby’s Prisoner Of Love. Things pick up afterwards, but we remain in 1965 for the large part of this last section of the set. It seems like the Kassner labels struggled to get a handle on psychedelia, with only Culver Street Playground throwing something mildly trippy in their mostly bubblegum offering Alley Pond Park.

Away from such considerations the beat jangle of Fish ‘N’ Chips on Four Times Faster is good and in a similar mode the Druids have a little more attack on their Girl Can’t Take A Joke waxing. Sonny Stiles And His Kings Men were unlucky not to strike it big with the smart pop touches of their Give A Little Bit single, it’s a cool mover. Pat Jarvis’ The Soul Of My Man is enjoyably earthy and the Guardians Of The Rainbow supply some dramatic chills on their acid folk tune Cry Alone.

New York Graffiti finishes on a great note with Doris Willingham’s soul number You Can’t Do That, the first release on the Jay Boy label. This imprint would provide important outlet in the UK for rare soul/r&B, but this song makes an impact on its own, great vocals with orchestral touches that make it seem like a forerunner to the Philly sound. The record itself flopped unfortunately, but there is no doubting its quality.

This is another handsomely presented boxset by RPM with an excellent 80 page booklet which gives you pen pictures of the artists and a potted history of the labels involved. With lovely design and in-depth knowledge, it is just the job to accompany the evocative sounds included. Though there are a few middle of the road tracks that disappeared into the obscurity they deserved, enough of the tunes contained held my attention and there are a fair number of out and out belters too.

New York Graffiti is a truly refreshing listen that zeroes at its onset on that time when pop music was new and still finding its feet among a raft of influences. If in making the ten year trip in American music from 1958 to 1968 some of that initial innocence was inevitably lost, there was enough quality and emotion to be both truly authentic and extremely listenable, even in the modern day.