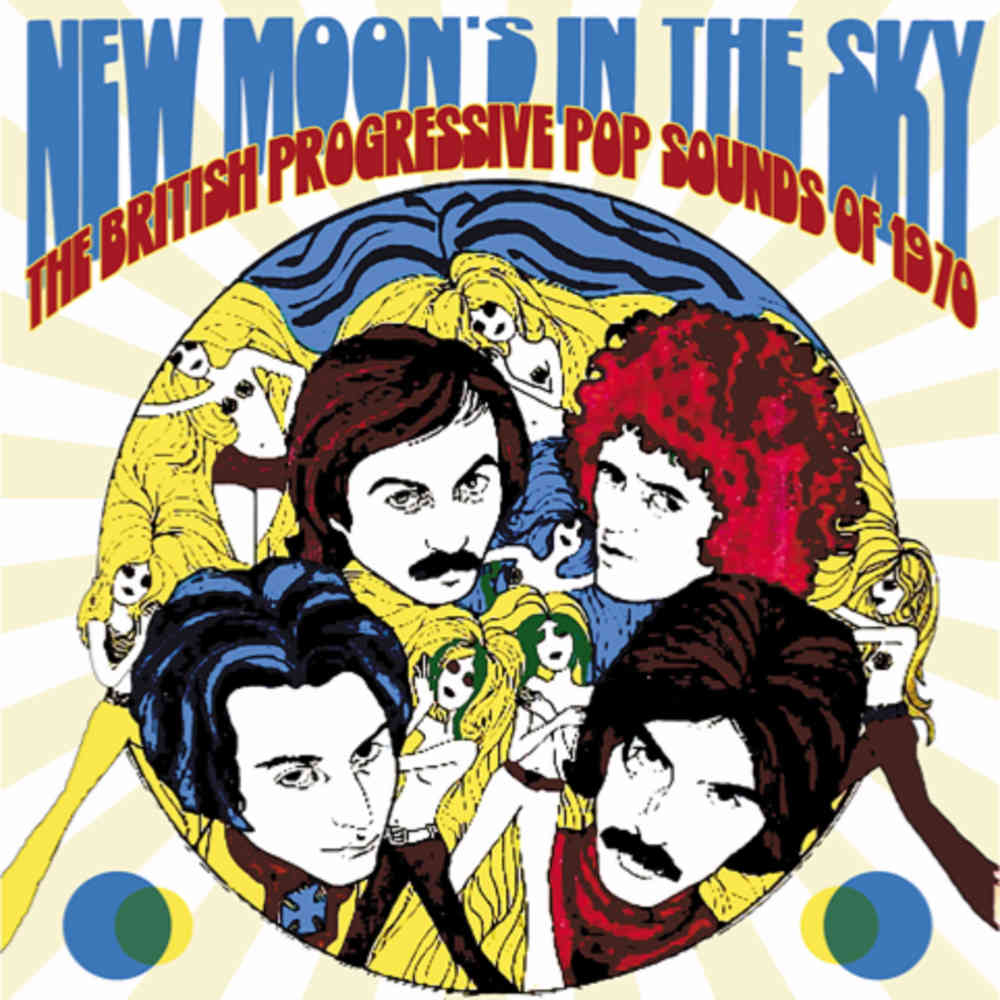 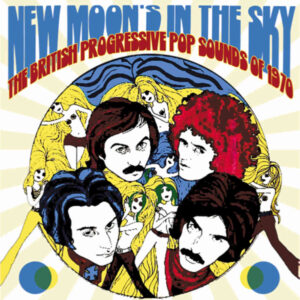 Subtitled “The British Progressive Pop Sounds Of 1970” this set finds out how the UK responded to the end of the 60s and the Beatles, with tracks by Patto, UFO, Procul Harum and Kevin Ayers among many others…….LTW’s Ian Canty finds that in the new decade things hadn’t quite stopped swinging just yet…..

The Beatles going their separate ways after recording the Let It Be album in 1970 was symbolically a marker for the end of an era in British Pop Music. Though it would be the very end of the year before the split was made explicit through the filing of lawsuits (the legal bickering would drag on for much of the early 70s) there was a sense that this, with the 60s drawing to a close at almost the same time, resulted in a new and strange environment. Or at least received wisdom would have you thinking that, because New Moon’s In the Sky tells a slightly different story in that things mostly proceeded as before and the Fabs influence went on, despite the cessation of their activities.

For the most part, Progressive Pop (for want of a better phrase) still was shaped by the Psychedelic boom of 1967 and a lot of the bands present on this collection had a playing/recording history that reached back even further than that. There’s still a blissed-out and stoned feeling on a lot of tracks here and being “Heavy” was definitely “in” too. In fact Pop act the Tremeloes (featured with the echo-laden stomp of Me And My Life) rather fell over their own feet to establish their Heavy credentials, calling anyone who purchased any of their previous records morons. Unsurprisingly they found it difficult to sell their new style to their original fanbase and not too many others were interested either, but it does show the pressure bands were under to be authentic and “progressive”.

To me it is a delicious irony that two styles like Pop and Prog, seemingly at loggerheads, when brought together are so pleasing. The disciplines of Pop i.e. short running times, choruses etc reined in the excesses of Prog but didn’t totally expunge their qualities, just repositioned them in a song format. This resulted in something that made Prog bands’ work truly accessible. New Moon’s In The Sky proves this again and again over the course of the three discs.

Almost immediately on disc one there is a example of what makes these collections such great fun and why they work so well. To be completely honest I probably would never have gone out of my way to listen to Barclay James Harvest, but their offering Good Love Child confounded any assumptions I had of the band. It’s far more spiky where I would have expected gloss, with an edgy purpose and above all a cracking tune. It’s good to find Hawkwind in a nice acoustic hoedown mood on the harp-assisted debut single Hurry On Sundown and Stray’s Around The World In Eighty Days is the perfect combo of Hard Rock and Psych. The Humblebums’ lovely All The Best People Are Dead and the quickfire cover of The Two Of Us (from Let It Be) by Penny Arcade are both signs that the Beatles influence wasn’t going anywhere even if the actual band were done and dusted.

In a different vein Farnborough’s Canticle do a lovely Folk Rock job on the Small Faces’ oldie My Mind’s Eye and Ollie Halsall gives us some of his trademark tasteful guitar pyro on Patto’s Time To Die, with Mike Patto at his soulful best too. It’s a national disgrace that Kevin Ayers excellence isn’t more celebrated when countless minor talents are and as the sleeve note alludes to his arch intelligence must have proved a factor in the development of David Bowie and Roxy Music’s work, there was always other things going on under the surface too. A case in point is Singing A Song In The Morning, where a charming singalong is equipped with some smart Syd Barrett style guitar (Syd was due to play himself on the song, but his fragile mental state precluded his involvement).

Both the Flying Machine with their self-titled effort and the Sweet, years away from their Glam Rock days on Mr Gallagher, give us very cool pieces of euphoric Pop Sike. The Good Vibrations, actually Portsmouth band Coconut Mushroom with a pseudonym dubbed on them by the Ember label, might sound like Freakbeat four years late on a version of the Who’s Call Me Lightning but it’s great stuff and Dave Edmunds shows his guitar wizardry and Pop smarts on Love Sculpture’s In The Land Of The Few.

Ending this section of the set is She Trinity with Climb That Tree, which was originally recorded by the Onyx, with whom they shared management. Actually it is the Onyx’s backing tracking with She Trinity’s vocals plastered over the top in an awkward way, but actually the strangeness this “cut and shut” presents sounds totally right and in keeping with the Progressive Pop theme.

Moving onto disc two we first have Marmalade (mmmm tatsy!), who had recently had a big hit with Beatles’ cover Ob-La-Di Ob-La-Da, but they had much more to offer. Their Kaleidoscope is the kind of sound you could imagine being played in a classier sort of head shop. There’s a demo of Atomic Rooster’s Devil’s Answer which has some chunky riffing courtesy of John (Du) Cann (He also features well on Andromeda’s more Bluesy rocker Step This Way) and in a similar Hard Rock/Psych vein UFO impress with sedately buzz of Treacle People. Rusty Harness do Goodbye, the mighty Mike Berry-penned Garage Punk throwback that he had two other bands version either side of this 1970 release (the Shepperton Flames in 1969 and the One Hit Wonders in 1972).

Big guns the Hollies managed to shrug off the loss of Graham Nash with the convincing harmony Pop of Mad Professor Blyth giving another dimension to Allan Clarke’s dotty song. There’s a hint of the Glam that was soon to come on Yellow Taxi’s Anna Laura Lee that also has some crunchy guitar work from Barbara Ruskin and the Fox from Brighton supply Lovely Day, a cool bit of Pop Sike with a taste of Bubblegum thrown in too. This section of the set ends with the Fut’s Have You Heard The Word, which has such a spot on Lennon impersonation by Maurice Gibb some people thought it was a Beatles outtake.

Moving onto the final disc, we have the fast and flashy Hard Rock of Warhorse on St Louis and neat guitar overload of An Appointment With The Master by Bachdenkel. This one was taped whilst they worked on a projected three sided LP entitled Lemmings, this was some years before the Residents had a similar wheeze in mind. Two dips into the Studio G library music album Beat Group yield the moody and possibly outdated but still pleasing Beat of Together In the Night by This Side Up (a band whose members went onto work with Monty Python on their LPs) and Flashman’s R&B strut Hard Selling Woman.

At this time the Move sought to update their approach and brought in Jeff Lynne as part of that. Their What? acts as a prequel to Lynne’s later work with ELO, being split Beatles-style into little inter-linked sections. 10CC are also caught in an early guise as Doctor Father with a typically ornate piece of chamber Pop labouring under the odd title Umbopo (apparently a character in King Solomon’s Mines). The unpromisingly-named Airbus also offer us a highlight with Alias Oliver Dream, featuring Tina Charles in good chilled Toytown Psych form before her successful Disco makeover.

Danny McCulloch’s warm, big voiced Colour Of The Sunset is a real treat and the Ghost’s Indian Mind is a beaut too – Shirley Kent’s excellent vocals really help the song take off. The boxset draws to a close on an odd note with Bill Oddie’s spot on Joe Cocker parody/Yorkshire Folk air On Ilkla’ Moor Baht’At.

On occasion there seems to be a bit of a scattershot approach employed here on the running order. I like hearing different stuff jammed together willy-nilly so that you don’t know quite what is coming next, the element of surprise being key for me, so I didn’t find it a problem. I suppose that kind of thing won’t appeal to neater minds than me, but I found nothing that sounds truly jarring here. Apart from that, this is another eminently pleasing Grapefruit collection that fits jigsaw-like into the raft of Grapefruit/RPM/Esoteric boxsets. There’s rarities galore and bigger names acting gloriously out of character, plus enough good tunes to make one sure that UK Pop was still in good hands, despite the Beatles’ split body-blow. New Moon’s In The Sky is the sound of 1970s Pop making a graceful transition to the conditions of a new decade.