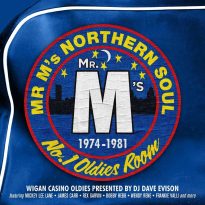 Fully titled Mrs M’s Wigan Casino Northern Soul Oldies Room 1974-1981, this boxset looks at the over-spill room of that classic venue that carved out a following and reputation of its own……..LTW’s Ian Canty at the time might have only been applying talc after bathing, but he looks back at one of the first “retro” scenes…….

My old workmate “Big Ray”, man of the north, original Mod and Soul devotee, always contended that there was no such thing as “Northern Soul”. In his book all of it was all just Soul music, full stop. What is undeniable though is that Northern Soul was one of the first truly underground scenes that looked almost solely backwards for its music. The name was said to have been coined to describe the football supporting customers who would come to the Soul City shop in London when in the capital for away matches, but only buy records made during the 60s. These enthusiasts had no time for any of the developments in Rock, Pop or even modern Soul – none of it sounded fresh or exciting to them. They needed something that they could perfect their increasing impressive dance moves to and rare 60s Soul fit the bill perfectly.

As well as being a scene that looked back for its inspiration and music, it was also one that thrived on the rarity of the discs played. There was a basic criteria for any tune to be a success at Wigan. Firstly and most importantly, it had to be popular with the dancers from the word go, more or less an instant hit. If the floor cleared to any extent during the song’s duration, it would be swiftly discarded. Also, the disc had to be previously unheard too, which would give the DJ an edge on his competitors. Indeed labels would often be covered and tracks renamed, so that no-one else could latch onto a new dancefloor hit. “Keep The Faith” became the motto on a thousand holdalls – the all-nighters became swap meets for the rare singles, a peacock show of front from the scene’s top dancers (while new recruits practiced their steps away from the middle of the dancefloor) and the meeting point for like minds, obsessed with the fast, pumping and raw Soul and R&B of a decade previous.

The form developed from long-standing Mod clubs of the 60s like Manchester’s Twisted Wheel (that kept the driving beat going for their dancers all night long), but by 1973 Northern Soul had found its epicentre in Wigan, more specifically the Casino Club (in the old Wigan Empress Ballroom). Hosting their first all-nighter on the 23 September in that year, it quickly became the place to be. As such there were soon massive queues to get in the club and many disappointed boppers left outside having had a wasted journey/pilgrimage. On the night of the first anniversary it reached critical point, with the police threatening to close the Casino down when revellers filled the street, bringing traffic to a standstill.

Seeking to alleviate this problem, they opened up an early session called Beachcomber at the ground floor level of the Casino. This possible solution didn’t quite work as planned – patrons who were admitted to the Beachcomber had little or no chance of getting into the main Casino later, which lead to it being actively avoided. Having a rethink, the next possible solution thought up by Wigan Casino’s think tank was far more successful and gained a mystique all of its own.

Mr M’s (named after the Wigan Casino leaseholder Gerry Marshall) Oldies Room was based in a still functioning Cabaret Club, which necessitated a quick and chaotic change over. In its first week it was so successful that a 1000 signature petition called for it to be a regular night. On the back of that reception M’s became a regular feature. The club ran right through until 6:00 in the morning and was helmed by DJs like Dave Evison, Mike Rollo, Kenny Spence, Brian Rae and Steve Whittle. Its popularity was such that people often stayed in Mr M’s rather than going onto the main room, preferring the super fast tunes spun there, even if they were packed in as tight as sardines.

What made this an “Oldies Room” as opposed to the main Wigan Casino when they both concentrated on rare 60s Soul was basically it meant that they mainly played records that had been tried and tested at earlier clubs like the Twisted Wheel, The Golden Torch and the Catacombs. It wasn’t always the case that they were “oldies” compared to what was being played in the main room, but they were less rare grooves. This new compilation is here to help outsiders like me understand a little more. Fittingly it is divided in discs for DJ’s choices, the fans’ favourites and a third offering which reproduces a radio show where Mr M’s regular Robbie Benson talked with original DJ Dave Evison, who gives his take on things at the club while also playing selections that made waves there.

The DJs selection opens up with a couple of Twisted Wheel favourites, but they were far from what one might think as typical Northern Soul. Hey Sah-Lo-Ney by New Yorker rocker Mickey Lee Lane you may know by the Detroit Cobras’ more recent cover version and the Country Blues of Tony Joe White’s Polk Salad Annie benefits from a danceable laidback groove and his cool and tough delivery. The Mood Mosaic’s A Touch Of Velvet – A Sting Of Brass was even Simon Dee’s theme music in the 60s! So not so rare in Mr M’s, but anything was clearly fair game as long as the people dug it and filled the floor.

You can just picture the sharp-suited moves that the Mod attendees at the Twisted Wheel did to the Wynder K Frog instrumental cover of Green Door and this oldie made the grade to the new age of Soul worshippers in Wigan too. More textbook Soul efforts which still satisfy include Quick Change Artist by The Soul Twins (their moniker was taken up by DJing brothers Neil and Stuart Brackenbridge), Joe Tex’s 60s hit Show Me and Inez and Charles Foxx’s slower but just as good song Tightrope.

The fans’ choice disc certainly gets off to a speedy start, one wonders how dancers kept up with the likes of Mitch Ryder’s melody of Devil With The Blue Dress On/Good Golly Miss Molly or Bobby Freeman’s frantic but fabulous C’mon And Swim. Things do calm a little as we go along with Bobby and James Purify’s lovely, sunny Soul floater Let Love Come Between Us and the flowing almost Jazz Funk of K-Jee by the Nite-Liters. People may be more familiar with the Specials’ 1980 cover of Sock It To ‘Em JB, but the Rex Garvin and the Mighty Cravers version here is just as tasty.

Compared To What by Mr Flood’s Party had everything you could wish from a Northern Soul Stomper – fast pace, insistent, soaring horns, Hammond and some impassioned vocals – brilliant. The real King of Rock ‘n’ Roll Little Richard, shows he was a dab hand when it comes to something a little more funky, his Poor Dog being a trumpet-assisted beaut. Keep On Keeping On by N.F. Porter even has a definite Garagey edge. There’s a pleasing variety on show here, confounding the sceptic’s view of Northern Soul being based around Motown-copy 60s flops.

Disc three deviates from the non-stop music and is really a lovely walk down memory lane that even folk like me that never visited the Casino can get something out of. The enthusiasm rings out of Dave Evison’s voice here, it is clear what great passion for the music he still has all these years on. He paints a picture of a scene that felt like a part of an extended family to those involved and tells the story of Mr M’s from an insider point of view, even detailing the club layout.

Robbie Benson makes for a good host too, letting Dave go and though obviously having a fair bit of insight into the club himself as a regular, leaving it to the maestro. Their chat is interspersed with some of the key tracks played at Mr M’s (eight of which are featured on the previous two discs) and this section ends with the most unlikely Northern Soul hero of them all – crooner Mel Torme, who’s super-smooth Comin’ Home Baby was an unlikely hit on the circuit. Bobby Bland’s fine dance tune/vocal showcase Call On Me, a favourite of DJ Brian Rae, is appended to this disc too.

Though today you can browse in any supermarket’s CD section for many Northern Soul compilations, the scene was at the time defiantly underground, a “screw you” message to an unsatisfying contemporary music scene. Far more than these “off the peg” collections, Mr M’s Wigan Casino Northern Soul Oldies Room seeks to give you a real taste of what went on at those heady Northern nights/early mornings and highlights a wildly popular at the time, but mostly forgotten part of the Wigan Soul scene. These grooves live on.