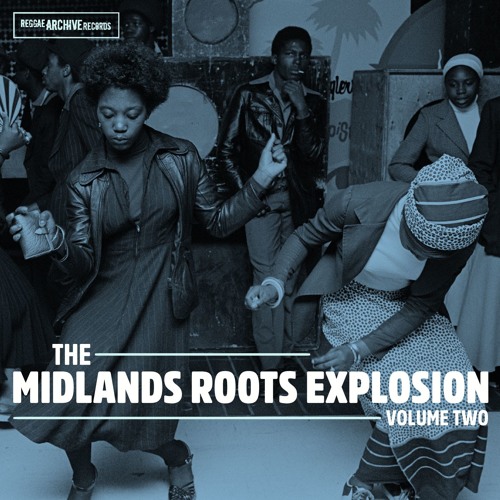 The follow up to the successful Volume 1 in this series that was issued in 2015, featuring the cream of Birmingham, Leicester and the rest of the Black Country’s thriving Dub/Roots Reggae scene that came to national attention in the late 1970s. Ian Canty feels the good vibes that came out of bad times….

I’m reviewing this at roughly the same time as the contemporaneous “Bristol Roots Explosion” and for any newcomers both collections will give them some idea of the breadth and huge popularity of UK Reggae around this time. Up until this point discs emanating from Jamaica always had the upper hand and UK produced material was looked down upon as substandard even before listening. The tide began to turn with the advent of Matumbi and the inspirational figure of Dennis Bovell (it’s no surprise that his productions turn up on both Bristol and Midlands sets). With his work as part of that band and his 4th Street Orchestra dub plates others were encouraged to take the plunge and the bands and artists in the larger West Indian settlements around Britain made the biggest mark.

Handsworth’s Steel Pulse begin the comp and though I’ve always favoured the beautiful and joyous Misty In Roots over them as the best ever UK Roots band (actually I would pick Aswad ahead of them too, who before they went totally commercial were a thrilling outfit, but that’s only my opinion), I have to say their “Burn Dem” is a great track that really sums up the times and sets the LP off to a cracking start. Musical Youth come next, but are a far more serious proposition with the anti-war and righteous “Generals”, than when the band hit the charts a year or so later.

Groundation from Leicester, might not have stormed to the top of the league like the Foxes have in the football this year, but “Rebel” is a languid and attractive skank with some nice geetar pickin’ and fellow out of towners Wolverhampton’s own Capital Letters prove just why they made a big splash with a great Rasta Roots party mover in “Equalisation”. You can trust Sledge Hammer because they know what they’re doing (sorry, daft cop show reference but it had to be done) their “Ruled By The Stone” is an authentic local take on the kind of popular but strident Reggae style that the likes of Peter Tosh were doing at the time.

Over all mid-paced skanking dominates; whereas the Bristol scene seemed to tend more towards dub excursions, the Midlands favoured a more militant Roots style. Only Black Symbol buck the trend with the slow, echo-laden devotional “”None a Jah Jah Children”. Still there’s much to enjoy here if mid-70s Rasta Roots is your thing. Carnastoan’s “Sweet Melody” uses that irresistible watery Dub sound to put forward the message that “Reggae will never die”. Though sadly the Midlands scene waned and was all but finished by the time the mid-80s arrived, the music on this collection resounds brilliantly down the years, the sentiment is certainly true on this evidence.