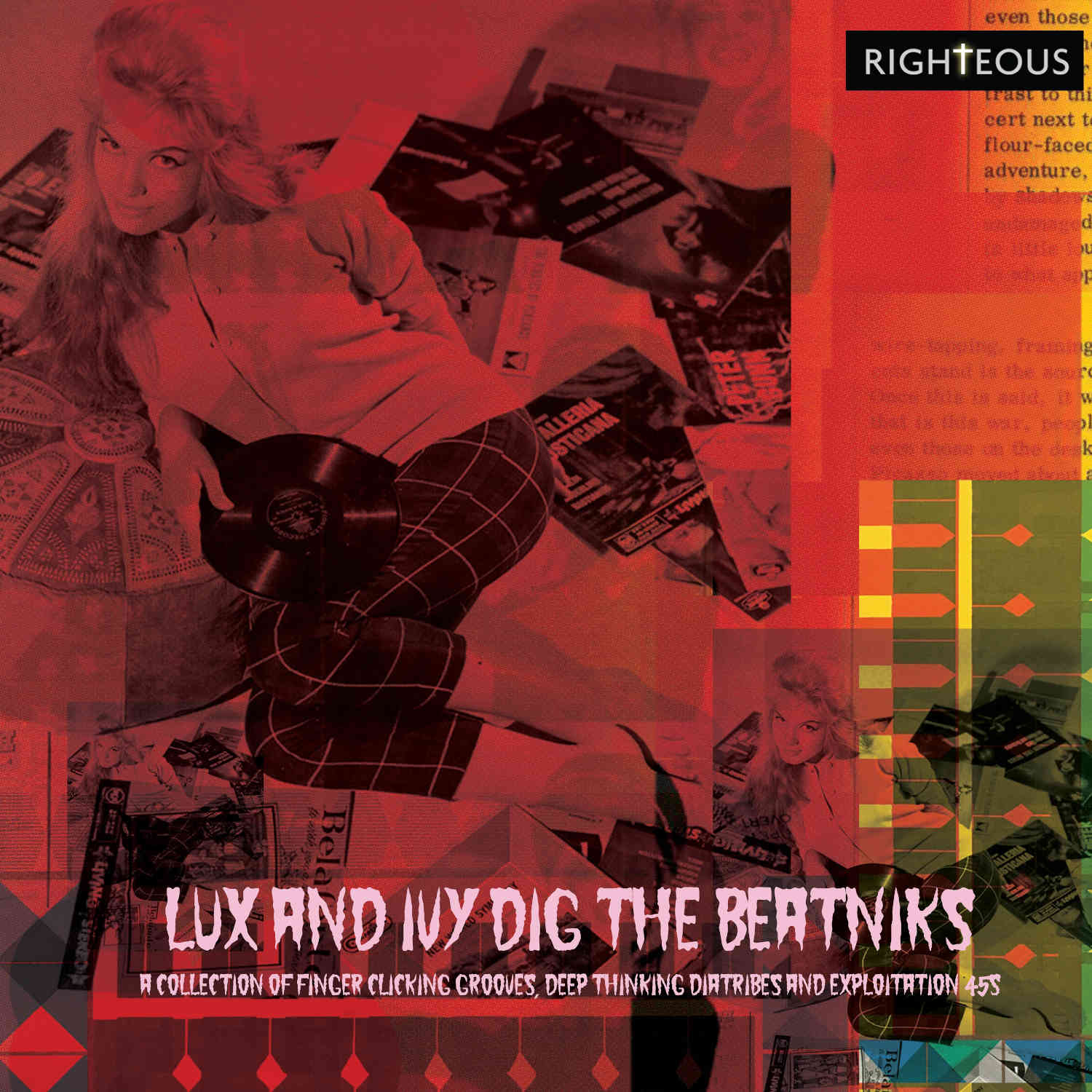 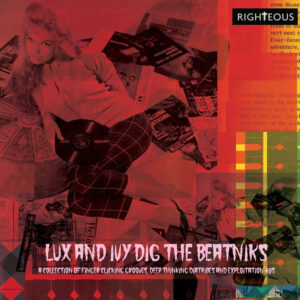 2CD set focussing on the Cramps’ duo’s favourite discs from the Beatnik era, with cash-ins, novelties and very occasionally even the real thing…..Ian Canty gets like, down Daddio (even though he is a square)……….

That Lux Interior and Poison Ivy of the Cramps were record hoarders is as plain as the conk on your fizzog and they delighted in dabbling among the vinyl grooves of all sorts of offbeat areas. There have been many compilations over the years purporting to be “from their own personnel record stack”, some focussing on the more obvious (i.e. tracks the Cramps actually covered), others on the less familiar. But this seems to be the first to totally look away from weird Rockabilly, sick novelty, evil Blues and Garage and instead towards the mysterious world of the Beatniks.

For anyone not aware of the cult, Beatniks were kind of switched-on Post-War Modern Jazz fans that struck out for a new way, embracing poetry (often with the accompaniment of bongos), art and life far away from the “squares” and restrictions of “straight society”. Also they were (somewhat) forerunners of the Hippy movement 15 or so years later.

Amongst the more sincere waxings here there are also an ample number of japesters. The Beatniks were pretty much a sitting duck for middle of the road comics, allowing them to momentarily ditch their golf clubs and sport jackets for the stereotypical Beatnik outfit of turtleneck, sunglasses and a beret in order to send up these weird and intense youngsters (and in the course wringing the dear life out of any joke they poked at their expense).

There are a fair few of these types included on Lux And Ivy Dig The Beatniks (including Louis Nye’s Teenage Beatnik and The Goatee’s Gotta Go by Dick Summer for starters) and some of these novelties really don’t really bear repeated listens – you only need to hear Don Morrow’s hip and flip nursery rhyme recast Like Rumpelstiltskin once, if that. I swear I saw some tumbleweed drift slowly through my back garden during the frankly irritating Theme From The Pad Parts 2 And 3 by Sylvester Statuslack Hup too.

However there is also a good amount of irresistible kitsch on offer. For example Edd Byrne, an actor with no real singing voice to speak of, unexpectedly provides a couple of highlights. He played a hep talking Rock & Roll hipster/trainee detective called Kookie on the US hit TV series 77 Sunset Strip and in that character he sing-speaks his five tracks featured here. Connie Stevens does some sterling work helping him out on the cute novelty hit Kookie Kookie (Lend Me Your Comb) and the cool Hot Rod Rock passes muster too. Two songs, one after another on disc one, come the closest to the sound of the Cramps themselves; the truly Rockin’ Wombat Twist by Glenn And Christy and Stormy Gayle’s Flipsville, which has a Brand New Cadillac feel to it.

More in the true Beat mode are poet Langston Hughes with Consider Me, where he’s backed by Beatnik Jazz god Charlie Mingus And The Horace Parlan Quintet. The earnest style of Lawrence Ferlinghetti on William Butler Yeats On The Third Avenue is another pure hit of Beat verse. Much more irreverent but as entertaining are Slim Gallard’s comic You Goofed and Cramps’ fav Mad Daddy makes an appearance as the Joker with the nonsense of What Is A Fisterris?, coming on like an American Professor Stanley Unwin.

Over on disc two we begin with Johnny Beeman’s Laffin’ Beatnik, basically Charles Penrose’s slightly scary Music Hall song Laughing Policeman re-positioned for the Rock & Roll Beatnik fraternity. Next we find Bob Dorough’s epic poem Dog, where he imagines himself in the role of the canine and another Bob, this time with the surname Mersey, provides an excellent piece of big band Jazz theme music with the “on the money” title Beatnik. Al & Ina Harris drop a little 50s Pop into the moody Don’t Tempt Me and Slim Gallard is back for some more enjoyable skat-singing nonsense on Yip Roc Heresy.

The best known track on here probably is The Beat Generation by Bob McFadden (aka Rod McKuen), which went on to provide the basis for Richard Hell’s (I Belong To The) Blank Generation many years later. It is more of a spoof effort than No Pictures Please, which appears here under his own name, this one being serious spoken word with some nice and gentle backing music.

It would be remiss of me not to mention Sidney And The Chimps’ Blah, more Rock & Roll and the kind of novelty which the Cramps no doubt loved to bits. Also though probably not entirely sincere, Beatnik Wish by Patsy Ray and the Beatniks is blessed with Patsy’s effortlessly cool voice and some neat rumbles of percussion. Fittingly Kookie is back to close the set and Square Dance For Round Cats is another loveable novelty side even though he does sound like he is reading it off a piece of paper!

On balance this is a pretty good comp and interesting listening, though you’ll find out far more about the exploitation business than Beatniks here. Though some of the “comic” efforts are a bit grating, there’s usually some ultra-cool Jazz lurking underneath, even on Beverley Garland’s exceptionally sour condemnation of the Beats Tempest In A Teapot.

It’s clear the Beatniks, like every youth cult, attracted their fair share of brickbats. But I suppose Lux and Ivy could see and also appreciate the ridiculousness of both sides of the generation gap and that is what helped the Cramps become so unique. They loved the good, the bad and perhaps the ugly most of all. You’ll find all that and more on Lux And Ivy Dig The Beatniks, even if you don’t discover that much about these curious 50s youth during the journey, you should enjoy the ride…