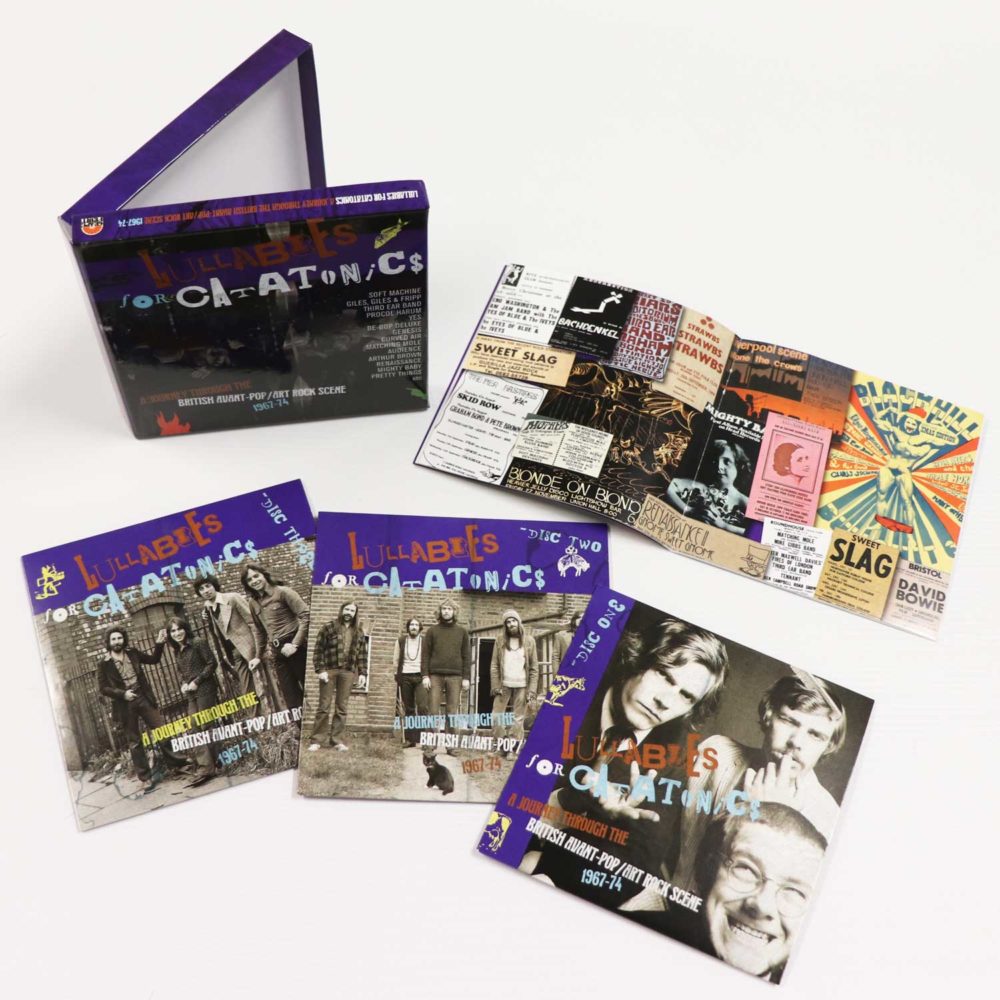 Various Artists – Lullabies For Catatonics: A Journey Through The British Avant-Pop/Art Rock Scene 1967-74 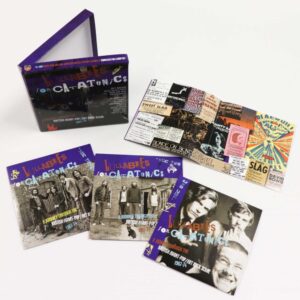 With the unwieldy subtitle “A Journey Through… ” this boxset has contributions from Soft Machine, Be-Bop Deluxe, 10CC and Mick Ronson among many others….Ian Canty doesn’t know much about art, or rock really, so goodness knows what he will make of it all…..

Psychedelia really opened the experimental floodgates in Pop Music, but they had already been creaking under the pressure since the Beat boom and everything that came after that. It seemed natural that the more adventurous minds, ones that were totally opened up by the acid-crazed sounds of nights spent at UFO and Middle Earth, turned their thoughts to creating something which mixed musical genres willy nilly and often as part of the same song. The aim of Art Rock (and Avant Pop too I suppose, but that is a relatively new one on me) and it’s adherents seemed to be the utilisation of sound in an expressionistic way, throwing in a wild variety of different forms, tempos and styles. Whether it was actually a “scene” in itself is debatable, with many of the acts featured here also turning up on Prog/Psych comps regularly (including other boxsets issued in recent years by the labels that come under the Cherry Red umbrella).

Maybe though these bands just saw it as continuing the experiments in sound started by Psych’s early main movers (like Soft Machine and Procol Harum, both featured here) and didn’t care too much for any label, but wished to have the same freedom as artists in other disciplines? Perhaps they just wanted to sound original and to push things forward in a progressive way? Added to the thought process, by the late 60s a lot of these musicians had played in Beat bands playing R&B, Soul and Jazz, so had considerable knowhow in many musical styles to be able to move smoothly across them at the drop of a hat.

Also, it wasn’t all that surprising that a lot of folk featured on Lullabies For Catatonics had passed through the odd art school either, seeing the potential philosophical crossover between music and art. Whatever the motivation, you can’t deny the sheer range of ambition that these young hellions had. Or looking on the negative side, that on occasion it also could result in the most horrible cacophonic mess. As time went on something that had started out as fresh and unique increasingly ran the risk of disappearing up its own clever clever backside too. So much so that by the late 70s Art Rock was usually employed by the music press as the derisory term for anything that failed both criteria: being both “bad art” and too calculated to provide any real Rock & Roll thrills. But in the timeframe represented here it also produced some startling and special sounds, as we shall see.

Anyway that’s enough of my meandering thoughts on the theory, but what counts as always is the music contained on the discs. Grapefruit have done a good job in cherry-picking some of the more appealing tracks from this milieu and provide detailed notes on each track in the sleeve booklet. So, a well put together release and many featured here will certainly find favour with fans of Psychedelia, Pop Psych and Prog. But that’s not the whole story as some artists here even mark out a path that would be picked up nearly a decade later by Post Punk outfits (some even had a go on the New Wave, with Gnidrolog having a second life as the filthy Pseudo Punk band the Pork Dukes and the great Bill Nelson forming his late 70s outfit Red Noise after Be Bop Deluxe split) and most of what’s here is at least interesting listening for the casual observer and not anywhere near as indigestible as the words Art Rock might suggest.

The Soft Machine kick off this comp with the unreleased I Should Have Known, if any band ticked the boxes of Art, Prog and Psych better it is news to me. Next a young David Bowie is part of Riot Squad who provide a jaunty and bouncy beat to make the Velvets’ I’m Waiting For The Man sound more like his Laughing Gnome than anything else. Very amusing and an early pointer to Bowie’s eventual direction in a few years time. If Procol Harum were always too informed by their great Pop nous to ever really be regarded as truly Art Rock, they are never anything less than enjoyable on the arch and piano-led Conquistador and Robert Fripp had to be on here in some guise, Giles, Giles And Fripp’s I Talk To The Wind has a full dose of his wonderful winding guitar sound. Woody Kern had future Roxy man Rik Kenton in their ranks and there is a faint resemblance to Ferry’s mob on Xoanan Bay too.

Tramcar To Frankenstein by the Liverpool Scene is a really cool and atmospheric spoken-word trip that even throws a bit of “Stepping Stone” garage into its climax and teenage VU obsessives the Velvet Frogs offer up a gleaming pearl Wasted Ground (Memento Mori). The rump of the band would form the Method, who cropped up ten years later on the New Wave scene that had finally caught up with them. Genesis and Yes, Prog mainstays, here sound more like ambitious Psych acts on In The Beginning and Beyond And Before respectively. The Third Ear Band give us some of the ominous mediaeval weirdness that was always a part of Prog on Druid One and Eyes Of Blue end this disc with Merry Go Round, a neat Prog/Soul hybrid.

Disc two of Lullabies tends a little more towards laidback introspection, even so there are a few fireworks thrown in. If Mighty Baby, the remains of Mod band the Action, can’t quite kick off their R&B roots on the funky Egyptian Tomb, it matters not one jot as it is a real winner. Audience, whether they be Art Rock, Prog or whatever, were just a great band and prove it handily on Banquet, with great horn work and Howard Werth’s typically strong vocals holding things together. Rustic Hinge are less familiar (actually Arthur Brown’s Crazy World minus Art, who does feature on disc one’s fuzzy and theatrical All Over The Country), but they impress on the dizzying and ever-changing riffage of Crystallised Petard.

I can remember listening to the oddball folk stylings of Comus about ten years ago and really not getting it at all. Now hearing them in a bite-sized dose on The Prisoner I can pick out a certain likeness to Sparks, in that a high voice is set almost impossible tempos to adjust to, just like Ron does for Russell. In the end they chant “insane”, which is right on the money. I think I will have to revisit. Lol Coxhill and David Bedford’s Music Hall antics on Don Alfonso are fun and Stackridge hammer at the odd edges of their Grande Piano with real aplomb. Fuchsia, ex-of Psychedelic club act Louise, end things in this part of the set with a lovely bit of Baroque Pop in the form of the dreamy Me And My Kite.

The final disc here dials things down even further, full of gentle Pop wonder with the odd (in both senses) curveball of course. Robert Wyatt’s plaintive and touching vocals fit Matching Mole’s lovely O Caroline like a glove and No More Sunshine Till May by As You Like It (ex-Tales Of Justine) is a nice piece of Jazz Rock with a lovely organ sound. Rupert Hine would go onto produce the Members on 1980 – The Choice Is Yours, but you wouldn’t know it from the doom-laden Chamber Pop of Anvils On Fire, rumbling kettle drums ramping up the tension. If Ron Geesin occasionally sounds like a dream combination of Ivor Cutler and the Residents on Upon Composition that can’t be a bad thing and Mick Ronson shows some of his typical guitar greatness on the Bowie-penned Growing Up And I’m Fine.

Talking of great guitarists brings us neatly to Be-Bop Deluxe. They always looked to the future and Adventures In A Yorkshire Landscape positively glows and of course Bill Nelson is on fine, soaring form throughout. After that it is left to ultra-talented Pop boffins 10CC with their warm and well observed Somewhere In Hollywood and the paranoid Folk Prog of Mother Russia by Renaissance to bring Lullabies For Catatonics a satisfying two-headed conclusion i.e. that you could do Pop with a brain and Folk Rock could be made to sound decidedly threatening and intricately crafted.

Whether or not the contributors to this set were really considered Art Rock during their lifespan is a moot point, but that is more than made up for by the quality of most of the recordings on show. What is for certain is that mad and great things were going on between the years of 67 and 74. Lullabies For Catatonics makes a pretty good case for scooting back far past Punk’s Year Zero for a look into a time that valued ideas and individual ways of saying them. New ground was regularly being broken and often resulted in a bewitching musical stew, judging from the evidence presented here.