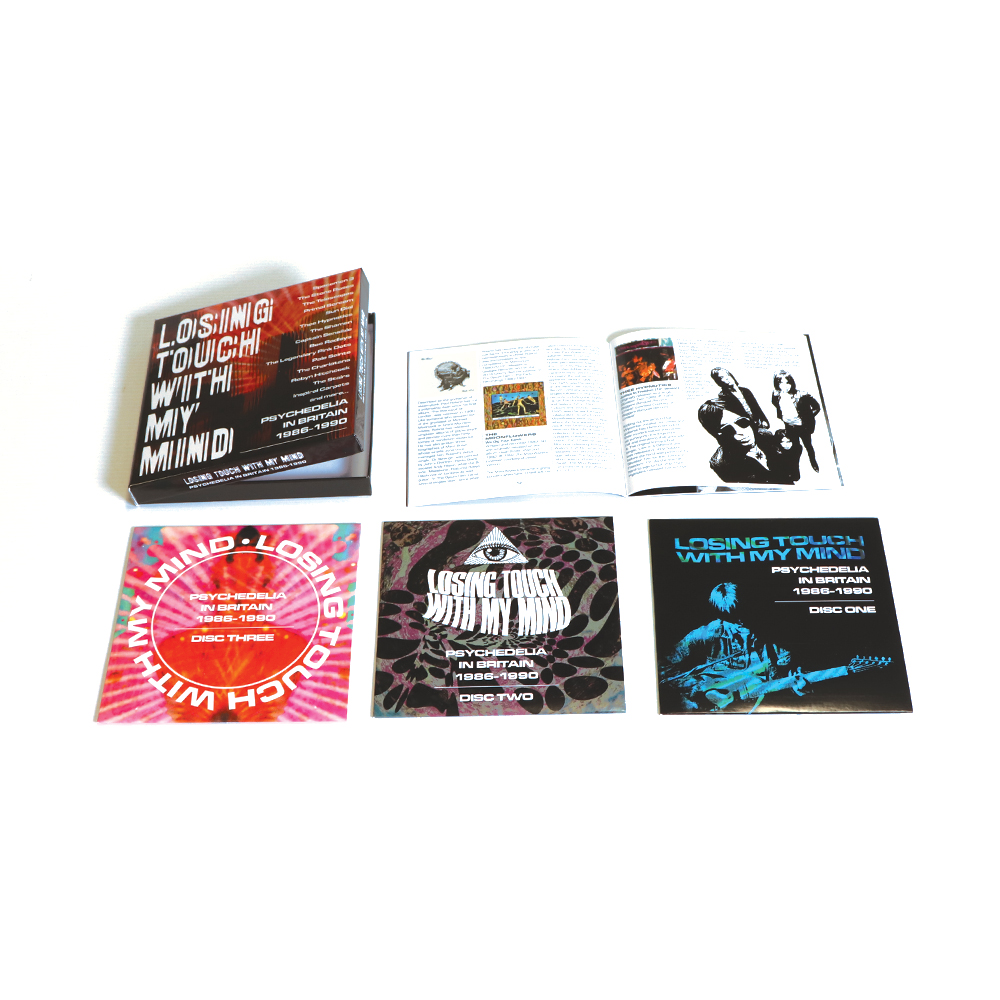 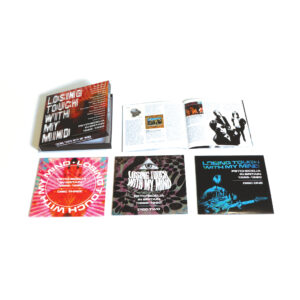 In the follow-up to 2016’s Another Splash Of Colour boxset, this time moving to the latter part of the 80s and featuring Inspiral Carpets, The Prisoners and Robyn Hitchcock along with many others, Ian Canty hears the sound of psych slip into almost every pore of UK independent music of the time.

After he release of the original A Splash Of Colour album in 1982 that particular psychedelic scene fell away, (although Mood Six gamely carried on which the quite lovely When The Time Comes on disc 3 here admirably proves), but the trippy sound of the late 60s reconnected itself to the UK’s musical bloodstream and from then on embedded itself in all sorts of unlikely areas. Out-and-out psych bands and neo-mods were obvious recruits, but goth outfits, shambling bands, jangly indie introverts, baggy chancers, even old punks (hello Captain Sensible) and Monkees wannabees (the excellent Jetset) added some blissed-out phasing to their musical attack. All these varieties make an appearance over the 60 tracks given over to Losing Touch With My Mind and that is its strength. Even those with only a minimal interest in the matters of psychedelia can embrace this compilation instead as a long haul journey through UK alternative music from 1986-90.

This set begins with the Stone Roses’ backwards mindwarp Don’t Stop. Although most are no doubt familiar with their oeuvre, they couldn’t really have not been included bearing in mind the impact of their Byrds-inflected sound on introducing many young people to the matters psychedelic via the Madchester/baggy scene. Spacemen 3 are another “must have” and their song gives the compilation its title as well as being a raging dirty beast of a number, full of malevolent attitude. This hot and heavy start to the record is followed up some fine fizzy fuzz by The Modern Art entitled Mind Train, and the spidery guitar and thumping drums of 14 Iced Bears on Mother Sleep.

The Prisoners always were a quality outfit and In From The Cold, the title track from their last album, doesn’t disappoint with a tough R&B base anchoring this mod/pysch stunner. Gol Gappas had a past in punk band Scissor Fits and were El Records signees. Alhough that label had a reputation for arch, sarky pop they also dabbled in psychedelia, something which is shown across these three discs and Gappas’ Albert Parker is a horror-tinged character study that wouldn’t have seemed out of place in the Kinks’ late 60s back catalogue. Days Go Slowly By is offered up by The Thanes, with an effortlessly cool organ drift and a bright guitar line. I’ve written about Paul Roland before and his track here In The Opium Den is another gem. Thee Hypnotics close out disc one with the Stooges/Blues stomp of Justice In Freedom (12″ Version).

Moving onto disc two we have Sun Dial, Gary Ramon’s Psych heavyweights formed after disbanding The Modern Art (see above). Exploding In Your Mind is a masterclass in explosive and trippy psychedelia, firm musicianship always providing a solid background for phased flourishes. Robyn Hitchcock is another artist who had to be included, the natural heir to Syd Barrett: his creepy plague number Lady Waters And The Hooded One is masterful hallucinogenic storytelling.

Indie Poppers in the 80s often delved into the 60s for inspiration – the debt that many of those bands owed to the Byrds meant it was only natural that on occasion their later work was also referenced. Although both One Thousand Violins’ Please Don’t Sandblast My House and A Morning Odyssey by the Sea Urchins are more warm and bright pop music than anything else, there are freaky touches of the mind-bending kind. Barbel’s unreleased Income Tax is one smooth groove and the Pale Saints’ Way The World Is has their classic rush of intoxicating guitars. Now there’s a band well worthy of re-appraisal.

Those only familiar with The Boo Radleys’ later hit singles will be surprised by the JAMC thrust of Aldous, and the Legendary Pink Dots meld psych with electronics to good effect on Princess Coldheart. The Glass Key featured Rubble Collection compiler and artist Phil Smee on vocals, his pivotal position in the revival of psychedelia informing the beaty Workshop Of My Mind. Jeremy Gluck of the Barracudas roped in members of the Swell Maps and The Birthday Party for the fine Tumble And Fall, and whilst you could argue that The Wolfhounds’ Another Hazy Day On The Lazy “A” isn’t really that psychedelic at all, it is a languid beauty of a song.

Leaving the best to last, the third disc of Losing Touch is probably my pick: it is consistently strong with lots of great material. From the Charlatans’ Opportunity to the terrifying locked groove that ends the Motorhead-tastic TV Cabbage by Gaye Bykers On Acid, it is a breeze. It’s been a long time since I’ve listened to Ultra Vivid Scene, but Staring At The Sun reminded me of The Only Ones, which can only ever be a good thing, and the Aardvarks’ cover of Wimple Winch is full of wild energy.

Simon Fisher Turner in his King Of Luxembourg guise gives us the arch beat number Smash Hit Wonder, and Inspiral Carpets confirm their position as the best thing to come out of baggy on 26. On Shake The Mind, C Cat Trance utilise “Magic Bus” style percussion to power a neat dance number along, and If Cleaners From Venus sound more like classic new wave than anything psychedelic on their Victoria Grey song, its in-built verve and drive make it more than worthy of inclusion. Paul Bevoir of The Jetset is one of the real unsung heroes of pop music: here their Happy In My Mind is a painstakingly crafted pop pearl.

Talking of unheralded Pop geniuses, hopefully one day people will regard the Times’ trilogy of This Is London, Hello Europe and Enjoy in the same way as SF Sorrow, Quadrophenia and other great concept albums. Oranges and Lemons, previously unissued in this guise, is an exercise in laidback cool. Salisbury’s own Jane From Occupied Europe’s Parade is a delight of fuzzy crunch and Graham Day’s Prime Movers take up the baton from the Prisoners on disc one with the tough R&B punk of I’m Alive. Sleep Creature And The Vampires, from Newcastle and featuring personnel that would go on to play in Punk outfits Penetration and Chelsea, show their spikey roots on Look To The Sun and then it’s just left for Gaye Bykers On Acid to end things with their previously mentioned mind-melter.

Losing Touch With My Mind is another top quality boxset with some great sleeve notes on all the artists featured and a really good scene-setting essay from Hugh Dellar which captures the excitement of all things psych in the 80s perfectly. You can debate whether some of the tracks were true psychedelia, and the omissions (I personally would have liked Yeah Yeah Noh to have appeared, they made some fascinating contributions to the genre at the time), but what you have here is great listening. You also have wide variety and experimentation, that together bred originality. Though reaching back to the 60s for inspiration, most of the bands here also recognised the spirit of pushing boundaries that was implicit to psychedelia, and this helped them to steer away from being mere carbon copies. An excellent compilation of the other side of the 80s, away from the charts but perfect in its own way.