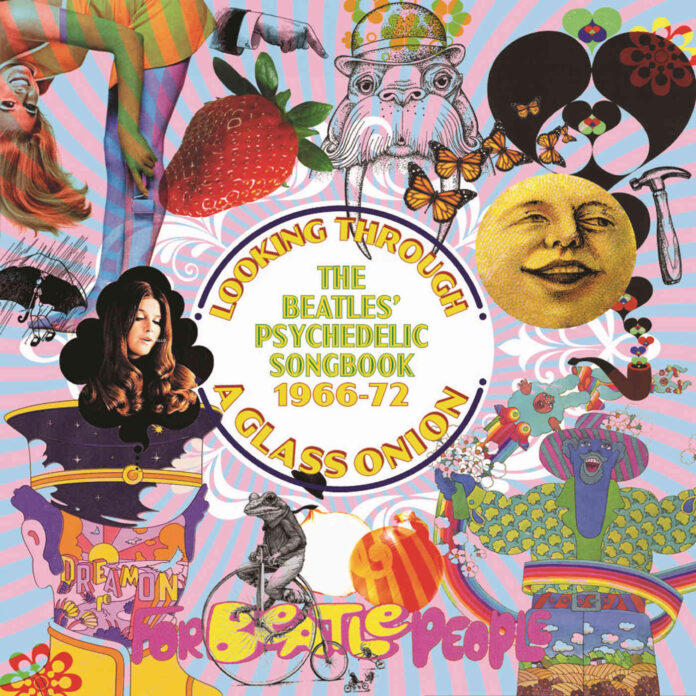 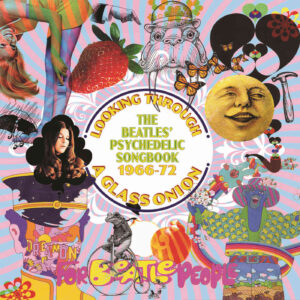 3CD collection subtitled “The Beatles’ Psychedelic Songbook 1966-72”, with contributions from varied sources such as The Hollies, Lol Coxhill, Deep Purple and even Dame Vera Lynn! 68 tracks in total that seek to top the Fab Four originals, or at least find another wrinkle or level to them…Ian Canty finds out if he loves it, yeah, yeah, yeah…

I expect that the patrons of this site possess some differing opinions on the Beatles and their worth. But one thing that is difficult to argue against is the notion that they had the enviable knack of being able to pen a catchy tune, seemingly at the drop of a hat. They were a veritable hit machine, finding it impossible to miss the upper tier of the UK charts on either single or long player. It was inevitable that many a 1960s pop act, running short of inspiration, would chance cutting a version of one of their sure-fire winners, in order to gain that elusive chart placing.

Yes a lot of struggling bands back then pinned their hopes of a quickie cover of a Fabs’ tune, particularly during the years from 1966 to 1972, the timeframe of this new compilation set. For the lucky few it worked a treat and they reaped the reward with a hefty hit single, but for the majority the ploy failed and their hopes were dashed. Of course this was not the only motivation for recording Lennon and McCartney, Harrison or even Ringo Starr songs. Some bands and singers simply enjoyed repositioning the Fabs’ often well-known the tunes to their own ends. Looking Through A Glass Onion looks at a few commercially successful, but mostly not, Beatles covers, along with some more unconventional takes that were cut during the same period.

There are a few straight cover versions that offer little in terms of taking the songs in different directions, I suppose working on the maxim “if it isn’t broke don’t fix it”. Thus the artists mimicked the Fab Four’s abilities without adding anything of their own, which sometimes worked, but doesn’t show the bands that took this path in their best light. For example Ealing freakbeat combo the Eyes (of When The Night Falls fame) were capable of much more than the perfunctory take of Good Day Sunshine that they are represented with here. But the psychedelic period and its aftermath also opened up a realm of possibilities for the more cerebral to truly run wild and even the hallowed Beatles’ handiwork was up for severe tinkering with.

Camel (Brits based in Italy, nothing to do with Andy Latimer’s mob) certainly try out this approach on their quite batty, but loveable, opening track Mystery Tour. This is a medley which also squeezes in goes at Paperback Writer and Good Morning, Good Morning into four minutes and concludes with what sounds like a chase on foot, great stuff. Prog heavyweights Deep Purple and Yes throw everything they can muster at Help and Every Little Thing respectively. The relative simplicity of the songs are given over the top settings by these two, something which all adds up to a whole heap of fun.

Nick Lowe’s Kippington Lodge do a very soul-inclined and noisy In My Life and High Wycombe psych wind-up merchants Rainbow Ffolly equip Lucy In The Sky With Diamonds with some silly voices. They turn up on disc two with banjo plucking and whistles galore on The Continuing Story Of Bungalow Bill that also has a strangely art rock vocal. They’re one of a number of acts featured here who get more than one go at versioning the Fabs (deep breath Trucial States, Deep Purple, Andy Ellison, Cliff Bennett, Young Blood, Big Jim Sullivan and Affinity also getting a second crack, I think that’s it!). Studio aggregation Sounds Nice throws strings and a clubbing rhythm at Flying, a little library music tinge to this, but agreeably so.

I’m a bit of a fan of Design, the vocal sextet who were a fixture on light entertainment TV in the early 1970s. The mix of male and female voices add a neat sense of drama plus choral twists to Strawberry Fields Forever. Alex Harvey, before he launched his Sensational (in all sense of the word) Band, is featured in the musical group that sound-tracked the stage version of Hair on a rocking cover of Birthday. Infinity infuse Taxman with some choice wah wah guitar effects in a spikey effort and Cliff Bennett And The Rebel Rousers even scored a top ten hit with their soulful take of Got To Get You Into My Life, that was helped on the way by a certain Paul McCartney pitching in on the production side.

Originally one of the first wave of UK rockers, Duffy Power by 1969 had reinvented himself as a folkie blues singer. He applies his acid folk weirdness to Fixing A Hole from Sgt Pepper’s Lonely Hearts Club Band. The obscure Trucial States from Plymouth take the 50s pop influenced Oh! Darling into Oh Donna 10CC territory and finally Orange Bicycle, including pop maverick Wil Malone, give us an endlessly lush Carry That Weight/You Never Give Me Your Money twofer. The first platter offered up here doesn’t have any real misses and is pretty much fun packed from start to finish.

The second disc of Looking Through A Glass Onion begins with Spooky Tooth’s nice heavy rock take on I Am The Walrus and Plastic Penny’s fairly straight but nicely organ-enhanced Strawberry Fields Forever. The Sorrows’ Don Fardon had the pipes to make a good impression when covering Otis Redding’s cover of Day Tripper and Freedom (a Procol Harm spin-off) also go nicely down the soul route on their Cry Baby Cry. Grand Union work a bit of magic on a freewheeling She Said She Said and an effervescent performance by Philip Goodhand-Tait And The Stormville Shakers makes up for One And One Is Two’s shortcomings in the lyric department (not on of Lennon/McCartney’s best).

An early influence on many of the beat bands, The Shadows graft a Bo Diddley rhythm to Paperback Writer (bless them) and the Majority adeptly equip A Hard Day’s Night with some extra feedback and crunch. Linda Peters (who would later go onto marry and record with Richard Thompson) covers Get Back and although this is a lo-fi recording, the pared back sound of just guitar and vocals suits her so well. It’s a lovely jewel of a version.

Mike Patto pops up as the voice of the Bo Street Runners, who give Drive My Car a groove that the patrons of mod clubs could well cut a rug to and Young Blood (featuring a young Cozy Powell) give us an airy and light take of the wafer thin I Will. This disc ends with Lol Coxhill and his very young offspring rendering a typically off the wall I Am The Walrus – might be the same song we came in on for this disc, but it is as different from Spooky Tooth as it could be and delightfully quirky too.

Unfortunately the concept wears thin a bit on the final disc, with some lengthy and let us not mince words, pretty damn dull jazz rock jamming, like on Affinity’s A Day In The Life for instance. They do redeem themselves on a cool Mod dancer take of Day Tripper in their previous guise as Ice though, a rough mix coming from a radio session. At the other extreme to Affinity, there are also more than a few versions that add nothing much of note to the originals and just drift by without making an impression.

Having said that Deep Purple’s mash-up of Exposition and We Can Work It Out is mightily bombastic fun and Andy Ellison’s big production number Help may be a world away from John’s Children (and even further from the Radio Stars), but it’s bright and engaging enough. That and the Score’s well-known but pleasing Freakbeat take on Please, Please Me at least get things back on track a little.

Shadows’ drummer Brian Bennett repositions Rocky Raccoon as a groovy organ instrumental and Tomorrow’s Strawberry Fields Forever has a really neat guitar sound, you can see they had potential. Dame Vera Lynn’s well-sung MOR version of Good Night brings down the curtain on this collection after some more drawn-out organ/drums jazz on Hardin & York’s Northern Medley.

On the whole though Looking through A Glass Onion is an engaging look at late 60s/early 70s UK pop music oddness, even taking to one side the Beatles link for a moment. It’s not always musically fantastic and some artists take a long while to do nothing really of note. But there’s also a lot of interesting and worthwhile stuff too, particularly on the first couple of discs. The familiarity and sheer catchiness of the Beatles’ songs led to the covers in the first place and somehow they come out often with a few new twists that even the Fab Four themselves wouldn’t have considered. Sometimes the desperation in chasing a hit resulted quite unexpectedly in inspiration. Beatles fans might wince a few times when listening to this set, but most 1960s music buffs may well chuckle at the sheer crazed ambition on the more “out there” efforts and want to get moving to the soul grooves too. A curate’s egg for sure, but an appealing one.