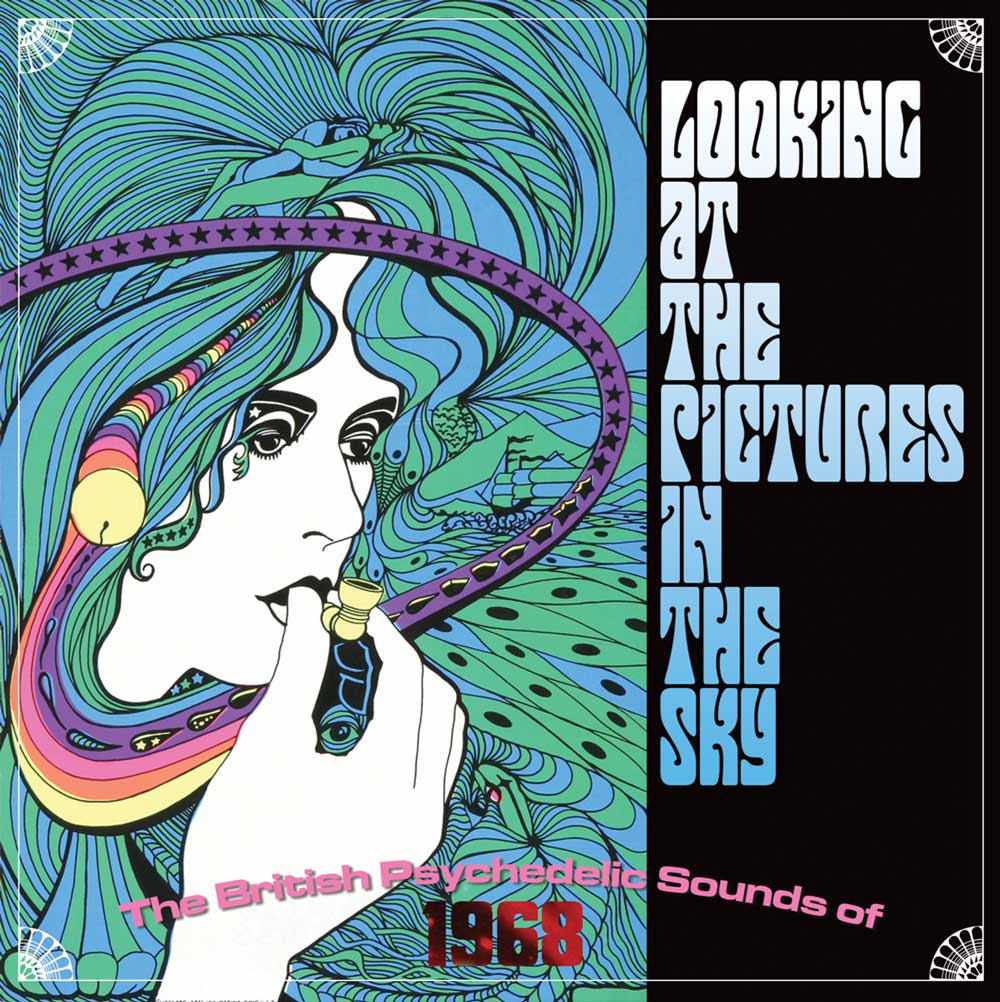 Looking At The Pictures In The Sky

New boxset focussing on the first post-Summer Of Love year in UK Pop…..Ian Canty looks at what happened after Psychedelia went overground…….

Looking At The Pictures In The Sky focusses on, if received wisdom can be trusted, what was very much a “down” year for popular music. 1967 had been a real game changer, with the new scene leaders providing wild sounds, spectacle and new ideas never seen before in the Pop arena. Musicians looked further afield in search of inspiration and minds were opened. The years of Beat in the early 1960s looked a long way away, but this burst of creativity could not last.

By the end of the year many of the pioneers had decided the lysergic adventure was at an end (and some had become so beset by the drugs purported to expand their minds that they never really came back) and began to look more towards the primal impulse of 50s Rock for influence, leaving a load of late-arriving would-be Psych ravers and bands to take up the torch slightly removed from the cutting edge. There was a step back from the edge, a little lessening of intensity, a retreat that look just like the establishment of a new Pop format. But also the experiments played out in 1967 lead to a lot of new creativity the next year too.

Now this is an idea I think I have posited before but the events of the year 1968 can be seen to have, in a way, foreshadowed what occurred ten years later. As Punk was pronounced dead, what was left in 1978 was a huge amount of fans and bands that took to heart what it stood for and others who wanted to push things into weird and unknown directions. This year was also marked by some of the biggest Punk/New Wave hit records, as the people outside of the London inner circle took their chance to get a piece of the action in the still quite Punk world of Post Punk 1978. Psychedelia enjoyed a similar boom when the first flush was declared over.

So 1968 may not have the same weight as the previous year in terms of breaking new ground, but may have had the edge with regard to producing enjoyable records and pushing boundaries. Aside from such theories, in Looking At The Pictures…. we have another hugely enjoyable Grapefruit boxset. Given the year to trawl the compilers come up with the goods, with the well known names like Arthur Brown, Spencer Davis Group and Status Quo rubbing shoulders with genuine obscurities like the U (Don’t) No Who (nice chiming guitar on their Now And Again Rebecca) and Legay. As a result, many unknown jewels turn up.

Of course this collection comes complete with a well researched and good looking booklet which gives a nice potted history of each track (the info from which I have to admit I have rather shamelessly pillaged for this review). One thing to bear in mind is that some demos and acetates have been used here on a few songs and although sound-wise they are far from perfect, most of them warrant their places for historical and groovy reasons. I would rather have them in this format than not at all.

Starting off with a couple of late-period Freakbeaters in the Factory’s Path Through The Forest and Fire’s classic “identity crisis” tune Father’s Name Is Dad, after the initial rush this collection seems to suggest that 1968 represented the re-stating of pure Pop values given a Psych twist plus the first stirrings of Prog (Eyes Of Blue’s Never Care being a perfect Prog Pop nugget). Though one cannot deny the huge influence that the Beatles had all virtually everyone included on this compilation, other bands were also important.

Procul Harum seem key to these developments, with more than a few bands featured here following their lead (Ice on disc three with their tune Ice Man were definitely in thrall of Gary Brooker’s mob). Seen as the commercial face of Psychedelia, their huge hit A Whiter Shade Of Pale had a marked effect on many looking hopefully towards the Pop charts. They’re featured here with the flip of an unsuccessful follow up Quite Rightly So, In The Wee Small Hours Of A Sixpence, their patented “church organ” sound an influence on many.

Also the Pretty Things were showing how to gracefully glide from R&B, past Beat and then coasting on majestically through Psychedelia, with their brilliant Talking About The Good Times even showing close harmony bands how it should be done. Away from the bigger names Anan (once known as the U2!) mix a hint of fuzz with a gentle flute on Haze Woman and Legay win the prize for most Psych song title with The Fantastic Story Of The Steam-Driven Banana (the song itself has a kind of Motown tempo betraying the band’s roots as a Soul band).

Rameses story is pretty well known but worth repeating. He was a central heating engineer originally called Kimberley Frost, who suddenly decided that he was the reincarnation of an Egyptian pharaoh. He is featured here (alongside his wife Dorothy who was renamed Selket) on the tribal but elegant Mind’s Eye, one side of his debut recording. Later on he would collaborate with an early version of 10CC on his album Space Hymns, before sadly committing suicide in 1976. Talking of 10CC, that band’s Graham Gouldman provides a tasty bit of 12 string guitar Pop with Upstairs Downstairs here too.

The Kinks’ near neighbours Turquoise tap into the old Ogden’s Nut Gone Flake for Sunday Best and the South Coast port of Southampton reveals a previously unknown trippy side with both Les Fleurs De Lys’ super Gong With The Luminous Nose and Circle Plantagenet’s more basic, but still pleasing I Will Not Be Moved (strangely enough both bands reformed for a time in the 21st century).

Mike Stuart Span start of the second disc here with their debut single on the independent Imperial label, the racing and guitar-heavy Children Of Tomrrow. The Barrier follow, bringing things down to earth after the Summer Of Love with their powerful, no nonsense Dawn Breaks Through. Freakbeat legends the Attack show their late-period fire with Mr Pinnodmy’s Dilemma and the Poets (not the great Scottish band but an Irish outfit with the same handle) keep the pressure on with their fine Locked In A Room. Wimple Winch unfortunately had run out of steam a bit by the time of Bluebell Wood, which is catchy enough but not a patch on their harder, early recordings.

The Movement’s punchy Head For The Sun marries a very sweet hook to a Who Mod Pop attitude and then throws odd changes of pace and in an incongruous good-time piano, just to fox us. It’s good though. Now the Klubb might have looked more like Glam Rockers on the booklet photo but they bring a pleasing Punky edge to Midnight Love Cycle that will make you wish more of their work was available (one producer commenting that they were “unrecordable”!). The Real McCoy’s I Get So Excited shows the coming of Bubblegum as a force, nice phasing on this one.

Contact’s demo of Lovers From The Sky starts out sounding a bit rough, but after a rush to get everything plus the Psychedelic kitchen sink in, relaxes to reveal a lovely melodic feel that John Lennon himself appeared to favour (he apparently was behind the band’s main man Trevor Bannister signing a publishing contract with Apple). The Move’s name should be synonymous with quality and Omnibus doesn’t disappoint, another song clearly showing Roy Wood’s knack for sharp social observation wedded to a killer tune. Andy Ellison’s Cornflake Zoo was originally a Marc Bolan demo, they were both part of the band John’s Children just before this recording and managed by Simon Napier-Bell. It might not be the most obscure track, but has a ramshackle charm and see if you can hear Marc’s original take in the background.

Disc three commences with Jason Crest’s go at Hold On – not quite in the same league as Sharon Tandy’s wonderful take, but a nice, more organ-led version. Honeybus attempted to follow I Can’t Let Maggie Go with Girl Of Independent Means, a bright and breezy piece of Pop Rock complete with a Jean Genie/Bo Diddley riff. It worked a treat but didn’t get them back in the charts, but this shows a more easy-going, bucolic tinge to proceedings in 68, which is echoed on Blonde On Blonde’s Country Life. Containing two future Blockheads, it is no big surprise that Skip Bifferty were instrumentally sound, but their Round And Round is an excellent example of catchy Pop-Sike with a hard edge.

Pride of place on disc three must go to Barbara Ruskin’s magnificent demo of Pawnbroker, a masterclass in Psychedelic Skiffle with a paper and comb break! You wouldn’t have taken the angelic-voiced cherub Timon for later Clash/101ers’ associate Tymon Dogg, his Rambling Boy is a wide-eyed, winsome orchestrated romp quite at odds with his later busker image. Both Writing On The Wall and Circus contributions point towards Folk showing its hand as an influence on Pop again (this was probably the ground floor of Acid Folk).

The odd structure to the Orange Bicycle’s Soft Winds gives it a proto-New Wave feel and Coconut Mushroom’s Without You is a rollicking and catchy Who/Faces-style hoedown. The Eastern sound of the sitar was very much in vogue still, featuring on Boeing Duveen and the Beautiful Soup’s Which Dreamed It, but following that the Turnstyle’s tough and freaky Trot is a revelation. Set to a basic R&B/Soul template, spidery guitar squalls, furious drumming and epic singing mark this one out as a beaut. Then it’s left to the chill of the title track by Orange Seaweed to close out the comp on a poignant Toytown Pop note.

All of which hopefully gives you a flavour of what Looking At The Pictures In The Sky is all about. London had not quite stopped swinging in 1968, though the whirlwind frenzy of the previous year had slowed somewhat. A change of emphasis was in the air, from wild mind-blowing scenes to a more orthodox and considered approach, whilst not completely ignoring the Freak-Out. This boxset does a good job in rescuing 1968 from the somewhat dowdy viewpoint of common repute, but is far from a dull history lesson. There’s plenty of bite and imagination plus killer tunes here – and have a bundle of fun to be had exploring it all.