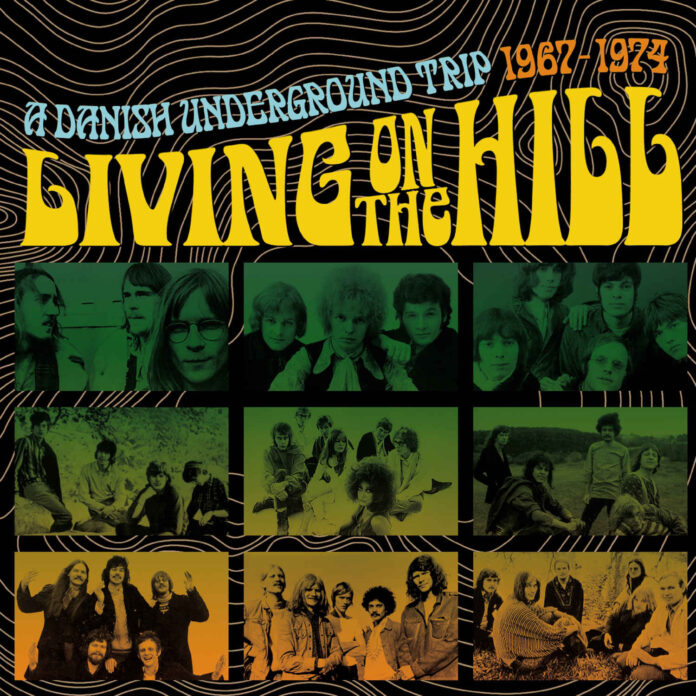 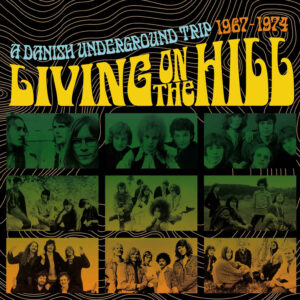 Living On The Hill

Subtitled “A Danish Underground Trip 1967 -1974”, this 3CD set looks at when psychedelic, art rock and progressive sounds ran truly rampant on the peninsula and many islands that make up Denmark…Ian Canty goes Jutland top ranking…

The young music fans of Denmark, exactly like their contemporaries all over Europe, were quick off the mark in reacting to the psychedelic explosion of the late 1960s. There was already a strong beat music scene there prior to this turn of events, something which primed the country for the changes that would come with the summer of love. Bands already existing, like the Beefeaters (from the capital city Copenhagen), who contribute the first track here in the groovy, organ-powered instrumental Night Flight, found it fairly easy to cross over with their garage sound. Others elected to form new outfits that reflected the changes of emphasis. Living On The Hill seeks to capture the sound of Denmark, as psychedelia slowly morphed into prog and art rock.

After Night Flight, the earliest recorded item here which adequately reflects the new sound on the Danish scene of the time, we’re into the more psychedelic part of Living On The Hill. The tracks on this first disc are all from the years 1967 to 1970 and unsurprisingly draw from that early, tripped out sound. Day Of Phoenix’s Tell Me is a pretty psych pop tune and their Wide Open N-Way has a folky and acoustic beginning that gives way to some freaky and fluid guitar work. They even throw in some prime soul/funk moves at its climax

Young Flowers’ Overtune/Take Warning mixes stabs of wild guitar and an r&b rhythm, before finishing things off with a piano coda. Burin’ Red Ivanhoe’s Ksilioy gives us the first hint of jazz influence that would increasingly come to bear, consisting of ten minutes of heavy riffing, buzzing guitar and soaring vocals. The Delta Blues Band show that the influence of The Nice had been felt in their part of Europe on their tune (or should I say tunes? Might be more on the money) Opus 1, and Rainbow Band’s B.M. juxtaposes jazz rock exploration with eastern drones in a bright fashion.

Ache’s huge, side long De Homine Urbano is the first offering on disc two of Living On The Hill. Like many other lengthy prog outings, the band appear to be restlessly auditioning a number of different directions and sounds, until they hit upon a theme they appear to be keen on. After riffing around that for a bit, they then cast that tune away and move onto something else. As things develop, there’s a lot of ominous organ and plodding bass line to the fore, recalling a kind of sombre horror film theme. Then it all drops away to a heartbeat rhythm, which is joined by keyboards and guitar soloing which both hover above the drums’ infernal clatter.

Then a flying bassline and more rhythmic percussion up the ante, leading into a gung-ho section that recalls heavy metal in its vigour, until piano and drums sinisterly emerge to take over and produce a decidedly claustrophobic atmosphere. We then come via a jokey segue into something that must have recalled r&b dance struts of the band’s beat roots, which leads to them finally giving up the ghost in suitably noisy chaos. There’s no getting around the fact that this piece may well be hard going for the prog novice, but one has to admire the imagination and verve employed. It’s a monster and they also end this disc with what probably represented the other end of their spectrum, the cool Procol Harum psych of Shadow Of A Gypsy.

In between these two Ache tracks there’s To Get Along by Pan, which feels like a chilled soul/rock song in comparison to what has gone before, albeit with some shivering strings. Culpeper’s Orchard debut on Living On The Hill with Mountain Music (Part One), which is catchy and punchy psychedelic rock packed with guitar pyrotechnics and not totally unlike 1970s Who. The title track to this set by Midnight Sun (the outfit featured on disc one as Rainbow Band prior to a name change), who leant heavily on the Danish jazz scene and featured alumni from The Beefeaters and The Young Flowers. Living On The Hill by this group even looks ahead to post punk a little with some Keith Levene-style guitars midway through and also includes flute and organ passages, the latter of which resembles The Doors’ work.

The final disc of Living On The Hill begins with Ache returning for the slow burning, bass-heavy chill of Equatorial Rain, shorter at about seven minutes duration this time round, but still working in many sounds well. After that we have Burnin’ Red Ivanhoe’s Avez Vous Kaskelainen? which has some good fuzzy blasts and before long we’re into Day Of The Phoenix’s cool Paradox. This number sounds a little like Neu! at the outset, with relentless motorik drive, before developing into an infectious hard rock song with some decent harmonies.

Both Thor’s Hammer and Blast Furnace skirt jazz and art rock pretty neatly on their respective contributions Mexico and the curious Ginger Cake, which may be an euphemism for something a little stronger. There’s a tasteful organ/piano pop number somewhere among The Old Man & The Sea’s Going Blind, which is one of a few songs featured on here that could have been edited down into a really catchy single, but that wasn’t really the point was it?

Roskilde’s Dr Dopo Jam appear to be the Danish answer to the Mothers Of Invention or even the Bonzo Dog Doo-Dah Band. Leavening their jazz rock psychouts with a big helping of humour, their track here Spring Theme – Summer Theme is a lively piano and sax combination. Culpeper’s Orchard return to give us the lively prog metal attack of Classified Ads before Secret Oyster’s Mind Movie puts the full stop on the end of Living On The Hill. Here they tote a slight funk influence in the bassline which joins in with some sad wordless vocals. Then they suddenly shift gear, embarking on a faster pace and endless guitar soloing that sees us through to a breathless conclusion.

Living On The Hill worked for me as a good introduction to Danish progressive music, a scene I wasn’t really that much aware of prior to listening. There’s a good variety of sound and it is carried off with a breeziness that means even the excessively long tracks pass without getting too dull. There is plenty of life and talent on display and one thing the Danish bands heard here all seem to possess is a genuine sense of explorative fun – there’s no cleverness for the sake of it or showing off, which does work very much in their favour.

The sleeve notes in the accompanying booklet do a good job of cluing the reader into the bands, most of which will be unfamiliar to anyone but prog crate diggers. But it’s the impulse of “anything goes” which beat in these young musicians’ hearts that stays with one after listening to Living On A Hill. With all restrictions removed, they blast off into space on this collection in a novel and energetic way.