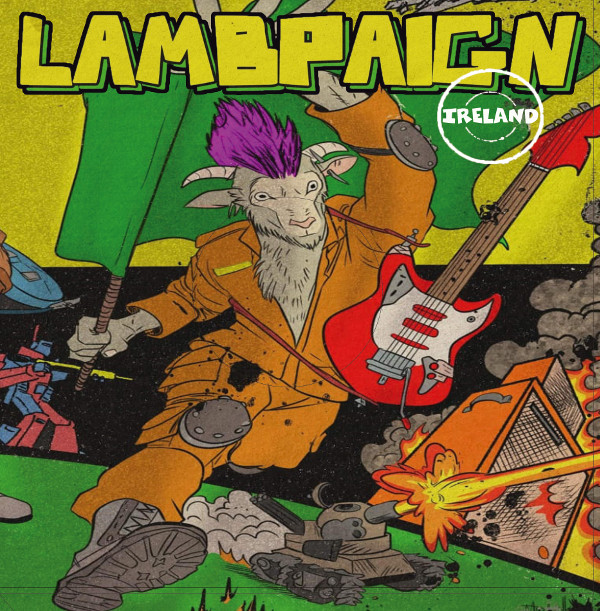 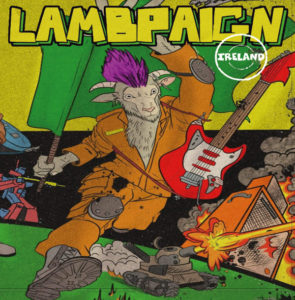 Nathan Brown checks out a taste of what the current Irish punk scene has to offer from Dead Lamb Records.

Irish bands tend not to get as much coverage in the UK as they deserve, with the odd notable exception, so I was intrigued to hear this collection of “savage Irish punk”.  12 inches, 12 songs, 12 bands. 5 of the tracks are  previously unreleased and, while a couple of the bands featured have made it to these shores, many will be relatively unknown.  It’s a good introduction to some of what’s going on in the Irish punk scene, with a diverse range of styles and sounds.

The striking full colour comic book style artwork on Lampaign – Ireland is designed to grab your attention: on closer inspection a sheep in battle fatigues with a Mohawk/Mohican (pedants please go and argue about this at the back, you know which haircut I’m referring to), carrying a battle standard flings his guitar at you. I don’t understand it but I like it.  So some sort of military campaign led by a sheep…..Lampaign!

Side A starts with The Nilz who turn in a speedy little number with its roots in hardcore, but there is a hint of grunge in there, and reminds me of an early Therapy? tune I heard on a DIY comp tape back before they were famous. What starts out as laid back almost West coast style vocal delivery builds up to a screaming assault on the old ear drums. Audible Joes come hurtling at you from the melodic end of the scale with a tuneful yet gruff approach that is begging for a mention of Hot Water Music, and something of the melody in the chorus and the guitar solo reminds me of early Leatherface.  For those who remember Irish band Monkhouse that wouldn’t be a bad reference point.  For those who don’t, add them to your list.

Jobseekers are an angry hardcore band with crew vocals, build ups and shouty vocals that get to screaming point at times. The lo-fi production hides some of what is going on, which is a shame, as they have something of complex American bands like Econochrist in their sound.  The Gakk are pretty much straight up punk with some chunky riffing and a groovin’ rocky guitar going on. The catchy chorus “One by one” connects the impact of violent pinch points of Irish history in 1916, 1921 and 1969.

The Jollars provide some chunky Oi with yobbo aggro verses, shoutalong line endings and sing song choruses.  The song Rebel Boot Boys – a tribute to their beloved Rebel City, Cork – comes from their Half Cut album reviewed previously for Louder Than War.  United Bottles bring side A to a close. They feature former members of Belfast’s Runnin’ Riot but sound much more rocky and have a ‘big guitar’ polished sound you’d expect from an American touring band, with a fair amount in common with the likes of Old Firm Casuals.

Grit from Dublin kick off Side B with an upbeat take on Oi.  You can hear a hardcore influence and they have plenty of melody which sets them aside from others in the genre.  A song about the impact of drug dealing on working class communities, it’s pointedly aimed at recreational drug users in middle class communities as they repeat towards the end  “No-one round your way ever had to dodge a stray bullet”. It’s a catchy one.

Nomatrix are difficult to pin down.  A whirlwind of drums on the chorus riff, they drop the pace with a buzz saw guitar and relentless singing on the verses.  The frequent tempo changes keep you on your toes and an abrupt ending is punctuated with a rabble shouting the chorus.   The Turn bring the youthcrew hardcore tradition into full view.  They’ve got plenty of build up and beat down and they’re the sort of band that these days might unfortunately inspire tough guy dancing or ‘crowd killing’ from a dickhead in a vest (don’t blame the band!)

Deathgrip have split vocals shared between Satan and one of his minions.  Driving upbeat hardcore with a crust influence – Nausea may be a good reference point – and a sprinkling of metal.  Despite my flippant pisstake of the guttural vocals, I’m intrigued to find out more about Deathgrip.

The Divils offer up a ska tune driven by a bouncy bass with some ranting vocals that come across like the ramblings of a drunken man regaling you of his life from the gutter.  It turns into a high octane, thrashy blur at the end of the song which, combined with the clean bluesy guitar break, tempts me to say “File under: Festival band”.  ShithaLtt (umlauts over the a) end the album with their ode to hash.  An atmospheric upbeat tune built on a sold bass and drums foundation that blends the twang of the Dead Kennedys with space rock.  Phasers set to stun and echo set to impress.  Fans of Butthole Surfers and various psych-noise bands will like them.

The insert includes lyrics for all songs and contact details for all bands laid over outline versions of the cover art.  Vinyl collectors ought to know that the limited edition first pressing (300) comes in black, green and yellow marbled vinyl.

As I have mentioned in previous compilation album reviews, they were invaluable before the advent of online listening links as a way to broaden your musical horizons. Now they probably serve to hone in on a select few from the thousands of new bands and songs on offer via the internet.   One great thing about compilation albums is that while you may have a couple of favourites, over time you become familiar with the other bands and songs. And the variety means you are more likely to play the thing a few times on the trot. Dead Lamb records are to be applauded for providing us with this opportunity to find out about some of the less well known bands from the Emerald Isle.

All The Madmen 7 Inch Singles Club Announce The Mob And...

July 3, 2013
We use cookies to ensure that we give you the best experience on our website. If you continue to use this site we will assume that you are happy with it.Ok