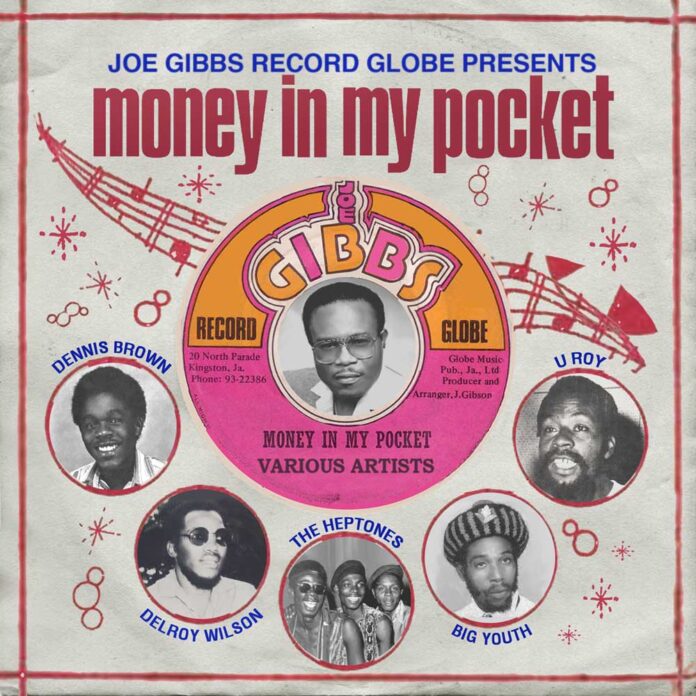 Various Artists: Money In My Pocket 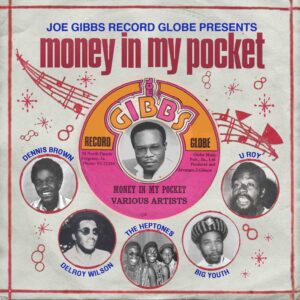 Subtitled the Joe Gibbs Singles Collection, this 2CD has big 1970’s hits from artists of the calibre of Dennis Brown (who had a UK hit with a re-recorded version of the title track), U-Roy, The Heptones and Alton Ellis, plus less well-known contributors like Eddie Ford, Allan King and King Smiley. Ian Canty checks his small change…

As the 1970s went on, Joe Gibbs’ status at the top of the Jamaican music scene was more or less assured. He had scored many successes from the middle of the 1960s onwards and later had set up his own purpose-built recording facility in Burns Avenue, Kingston. By 1972, the two main imprints he used for his many productions, Jogibs and Pressure Beat, were prospering. He was fortunate to have some of the cream of the island’s session musos in the ranks of his studio outfit, a band that would soon change its name from The Now Generation to The Professionals. So everything was in place for his roster of top-level performers to shine.

This new 2CD Money In My Pocket essentially picks up the story from the recent Joe Gibbs Presents Freedom To The People set (reviewed here). Of course, it all kicks off with the golden-voiced Dennis Brown’s mighty Money In My Pocket itself. This is the Joe Gibbs original, not the 1978 recut that thrived on the UK charts. Big Youth shows his prowess on the marvellously cool DJ cut A-So We Stay straight afterwards and the source material also gets versioned again hand drums and toast-style by Bongo Herman & Bunny, nee Eric Lamont, as Ration.

An updated mix of The Heptones’ rocksteady classic I’ve Got A Feeling adds to the pair on Freedom To The People, and Alton Ellis endows Eddie Floyd’s Knock On Wood with a few Dave Barker/James Brown moves. The vocal trio The Mediators began their recording career at Studio One back in the rocksteady era. Their self-penned jumping groove The World Is On A Wheel is magical and they also impress on a very soulful Things Not Easy elsewhere on Money In My Pocket. Pat Francis from the band would later have a more fruitful career under the sobriquet Jah Lion.

More Dub by Johnny “Lover” Jones is actually a languid DJ take on the rhythm of The Righteous Flames’ Solid As The Rock, with an actual dub coming after entitled More Dub-Chapter II by Joe Gibbs & The Professionals. Lover returns midway through this first disc for very cool Virginia Skank. The Happs’ jokey In Heaven There Is No Beer was on its flipside. This studio creation is one of the weaker moments here but apparently was highly successful in Jamaica. Delroy Wilson shows his adept skill at reading a gently skanking love song on Pretty Face Girl and U Roy’s Make Love Not War is a masterclass in dub textures on The Heptones’ God Bless The Children/Freedom Train backing track.

Derrick Morgan is on steady form on Horse Race and Eddie Ford’s Whip Them Jah Jah (featuring reggae lyrical standby “the rod of correction”) and If You Had Known are cut to the same rhythm. On disc two he also features with a chiding You Wrong Fe Trouble Joshua. The three mix DJ shouts and straight singing in a confident manner and Allan King, possible the same person who worked with Ariwa fairly recently, sings the attractive roots reggae of Africa Want Us All.

Tippertone and Tubby Clash by King Smiley attempts to bring the sound system battles of the dancehall to one’s home. A reasonably successful DJ waxing the result and then Augustus Pablo’s Pablo At Home has a jerky beat that is blessed with an overlay from that timeless melodica. Finally, there are two atypical Prince Francis offerings Quadrille and Quadrille Skank, where a folk/mento-backing is used for a DJ toast. These two conclude the first disc of Money In My Pocket. They’re entertaining novelties and if this first disc does have a couple of weak points, on the whole it is a good testament to the talents of Gibbs, his players, singers and studio staff.

The sound of hoary oldie Pretend is given a jolt by slightly comical brass and Dennis Brown’s stylish vocal to launch disc two of Money In My Pocket. This is followed by another Joe Gibbs & The Professionals intro on the same rhythm Botswana Skank, which shows the developing and inventive dub skills that the outfit’s records would become famed for. There’s a spiritual, gospel feel to Frankie Diamond’s steel drum-enhanced JA Special and one Manley Buchanan, aka Big Youth, was just hitting his stride at the time. He’s heard here first with two boxing commentary-style toasts Foreman vs Frasier and Round 2. Later on he really comes up trumps on the excellent and exhilarating Chucky No Lucky and a bass-driven Water House Rock.

Jackie Brown’s very catchy Love And Affection follows and The Ethiopians put in an appearance with Jump Up Action, their last recording for Joe Gibbs. While quite up to the level of their best work, it is pretty lively as the title would suggest. Delroy “Crutches” Jones, who put out a number of sides from 1970 to the early 1980s, voices a DJ cut on the latter’s rhythm and The Heptones’ elegant Be The One has masses of good-time appeal. After The Professionals dub up Be The One as The Road Is Rough, Cat Campbell toasts over The Uniques’ My Conversation and the upshot is an echo-laden effort called Musical Chastisement.

Bongo Herman’s percussion and Bunny are back on DJ/dubs Femi Fille and Fille’s Pleasure and this final phase of Money In My Pocket brings us the presence of Vin Gordon’s jazzy and very listenable trombone tune East Africa. Then Dillinger turns up on expansive form on Dreadlock Rock, stressing that this set is stacked with top quality DJs and Dennis Brown shows his talents again on When You Are Down.

Then we come to the final two tracks of the set, credited to The Senators. The sleeve note infers some input from Big Joe (Spalding), who started his DJ career at Coxsone Dodd’s set up, but his involvement seems far from certain. The slackness of American Pum Pum is very much of its time the toast is cut atop Red Bum Ball by Lloyd And Devon. Tape White Wash uses the same rhythm to make a comment on the then-current Watergate scandal, with a Richard Nixon impersonator spouting obscenities. Rum is the word and not exactly the most tasteful or impressive way to go out on.

However, Money In My Pocket does do a fine job of continuing The Joe Gibbs story. Dub is shown coming to prominence and this was an important development, something that would ensure Gibbs’ upward trajectory for the rest of the 1970s. DJ toasts were still popular at the time and the militant sound of roots was gaining traction too. Both are well represented here. I like the fact the compilers have included here some of the oddities from the JG archive – it helps to give the set depth. Though not quite as consistently pleasing as Freedom To The People, there is plenty of excellent material to hear on this set. Joe Gibbs’ continued success in the early 1970s of course owed much to his performers. But he was clever enough to negotiate the changing times and thus kept his spot at the top of Kingston music during  1972 and 1973. Money In My Pocket documents the best of his work during this time in admirable fashion.