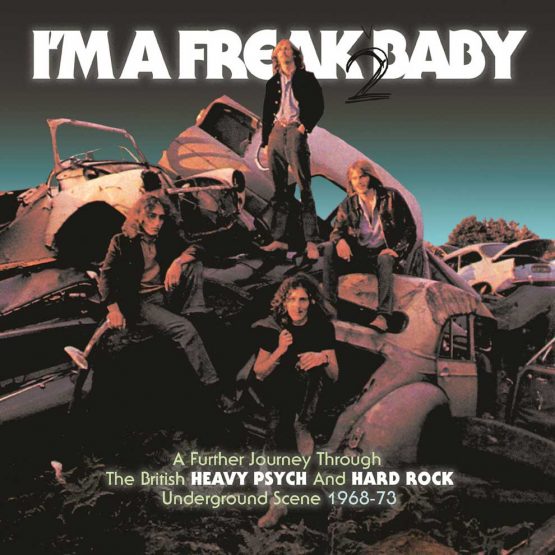 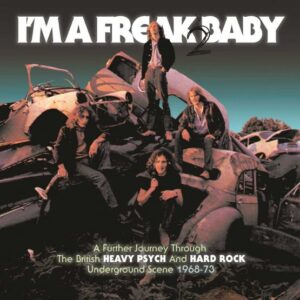 Subtitled “A Further Journey Through The British Heavy Psych And Hard Rock Underground Scene 1968-73”, this is the follow-up to 2016’s well received collection, I’m A Freak Baby, featuring contributions this time round from better known acts like Love Sculpture, the Move and Jeff Beck rubbing shoulders with genuine obscurities from Sardonicus, Lightyears Away and Iron Claw. LTW’s Ian Canty keeps the freak flag flying.

With the positive reception given to the original I’m A Freak Baby boxset a couple of years back (reviewed here), it was inevitable that there would be a second collection, and here it is. Zeroing in on the years bookended by the psychedelia boom and the dawning of glam, to my ears this follow up veers slightly more towards out-and-out proto-metal than the first. That isn’t necessarily a bad thing and the people at Grapefruit have managed to winkle out many previously-forgotten gems of hirsute mayhem from the vaults. For those who may have missed the first box, we’re in the area where psych and hard rock co-existed, sometimes as part of the same song. Progressive was the key word, perhaps not quite as in a prog rock sense though, more developing away from psych roots into something else a little rougher.

Led Zep and Black Sabbath were prime inspirations for a lot of groups on here, but rather than being straight copies of Plant/Page or Ozzy’s gang (leaving aside Thor’s standard but ok take of Paranoid on disc 3) most put their own particular and often peculiar stamp on things. The “Underground” thrived in this era too and the various free festivals, benefit gigs and alternative publications offered a support network for these acts. Many of the participants had been playing in bands since the beat days and the long sets that were required for mod all-nighters sharpened their chops and instilled a soul/R&B itch that would prove hard for them to fully shake off, even when at their very heaviest. As a result, there’s a surprising amount of tracks here that get the feet wanting to move, which may not have been the original intention, but adds to the fun immeasurably.

Setting the general template for what follows on disc 1 are Cardiff’s own power trio, Budgie, who start this compilation in fine style with their track Guts. Anyone still labouring under the impression that they were some sort of middling boogie band will be knocked for six by the brutal, beautiful thuggery of their mighty riffage here. They, among many others here, may have provided the building blocks for heavy metal, but at this stage the genre was not fully formed and still playful, including elements not generally seen in head-banging music a few years later on. Jeff Beck, with Rod Stewart providing vocals, pre-empts Zeppelin with a tough treatment of the Yardbirds’ oldie Shape Of Things, demonstrating the general changeover that was occurring in 60s rock in the later part of the decade towards something much heavier.

Wicked Lady add garage fuzz to Run The Night and Slowload provide a crunching proto-metal background for what is actually a bewitching pop song in Rosie. It works a like a dream. Iron Claw might sound like an archetypal heavy metal name, but actually their Clawstrophobia is more like teak-tough psychedelia and I rather like the punning title into the bargain too. The Move weigh in with a stellar horns-embellished shouter in Turkish Tram Conductor Blues, showing they were a long way ahead of being mere a psych-pop cash-in.

Dave Edmunds’ Love Sculpture got all the way to number 5 on the UK Charts with their manic version of the Sabre Dance, they full-on attack the old standard with a real proto-punk zeal. Stack Waddy provide more premonitions of the punk to come by giving the Pretty Things’ Rosalyn an ultra-basic doing over and Andromeda benefit immensely from the genius of the late John Du Cann. His inspirational guitar runs through I’m A Freak 2 Baby like Blackpool through a stick of rock, cropping up on disc 2 with Atomic Rooster (Death Walks Behind You) and Bullet on disc 3 (the tough rocker Sinister Minister), but here he packs a lovely late freakbeat-style guitar solo into the heavy psych wonder Let’s All Watch The Sky Fall Down. Monument’s crazed Dog Man is a macabre treat for hard rockers and the ever reliable Patto provide some of Ollie Halsall trademark bendy guitar heroics on Loud Green Song.

Moving onto to disc 2, Tear Gas kick things off with their funk-enhanced number, Woman For Sale, the band featuring future SAHB member Zal Cleminson. Another guitarist with just a little way to go before making it big was Mick Ronson, here providing his six-string majesty to the Rats’ Early In Spring. Personally I find the Edgar Broughton Band easier to take in small doses and their hit Apache Dropout is real snotty, proto-punk fun. Shrewsbury combo Dogfleet may have met with hostility from music weekly Melody Maker (“the usual set of manure” gives you a feel of the uncharitable tone), but their song Armageddon is a masterful piece of phased weirdness.

The Deviants keep the freak flag flying with the laidback menace of Somewhere To Go and if Tonge would later provide members of ’77 punk band the Depressions, you wouldn’t know from the strutting drums, constantly soloing guitar and rock & roll demeanour of Old Father Time. Even so it’s good stuff and is immediately followed up by the doomy crunch of Mouse’s Ashen Besher, mad riffing and a cool rhythm section working nicely in tandem. You can hear the clubland roots of Sunday on Fussing And Fighting, a R&B/soul backing to lyrics that recall Bad News on Warriors Of Genghis Khan! The Human Beast sound a formidable outfit on Brush With The Midnight Butterfly, fast paced bass and drums at first, but then utilising stops and starts to change mood with light and sensitive playing in the slower sections.

Reaching the final disc, a lot of the material featured on this platter only had a limited release (if that), by bands that mostly disappeared afterwards. An exception is the stripped-down version of Arthur Brown’s big hit Fire, which works well without the horns and, if anything, is that bit more effective. Of the more obscure acts, the stinging fuzz guitar and treated vocal of Lightyears’ Away’s Yesterday is excellent and 60s band Wild Silk’s follow-on act, Little Big Horn update mod pop for the early 70s on their punchy Name Of The Game. Ember signees, 9.30 Fly season their version of Willie Dixon’s blues standard Hoochie Coochie Man with a little glam thwack and it’s always a joy to hear Maggie Bell in full flight, her full-bodied vocals enhancing Stone The Crows on Big Jim Salter.

Beginning at near Ramones-speed, Early Morning Sun by Tarsus slows into a very pleasant boogie rock groove, garnished with trippy elements and a very high vocal styling. Natural Gas sprang from Opportunity Knocks winners Strawberry Jam and their bass-led Is There Any Doubt has a touch of 10CC-style pop about it, definitely a good thing I would say. Clark-Hutchinson were later to establish themselves as underground mainstays, but caught in early 1969 on Someone’s Been At My Woman they were a much more bluesy proposition. Good singing on this one as well. Prog/soul nutters, Writing On The Wall end things with Lucifer Corpus which hints at the theatrical and spectacular nature of their stage show.

Though I’m A Freak 2 Baby does have a somewhat heavier feel to its predecessor, there is enough diversity and moments of genuine inspiration to make it a more than worthy follow up. As you would suspect with a set put together by Grapefruit, there is the usual pleasing attention to detail, as the stories of the often almost forgotten bands are related in the sleeve notes and illustrated by some great period photographs. It’s a box load of fun indeed.

The years covered have sometimes been viewed as a period of “downtime” in UK rock – this, along with its predecessor, proves that under the surface, plenty was happening, much of it fascinating and certainly meriting reinvestigation. I’m A Freak 2 Baby offers us another fine insight into the pre-punk years and damn good listening too.