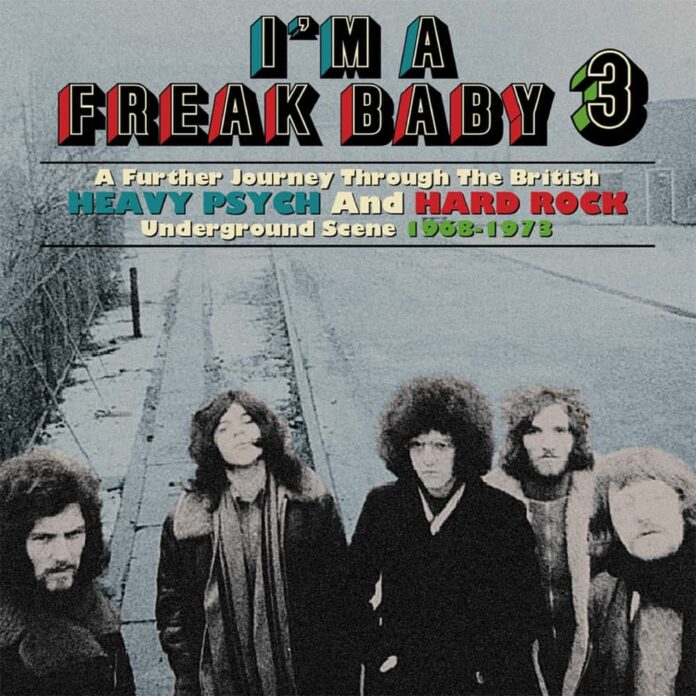 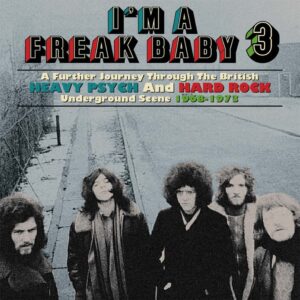 Subtitled A Further Journey Through The British Heavy Psych And Hard Rock Underground Scene 1968-1973, this is the third 3CD boxset in the series, with contributions from The Pink Fairies, UFO, Thin Lizzy and Hawkwind among many others….Ian Canty gets the lowdown on the lowdown and dirty late 1960s and early 1970s UK…

If you tuned into the first two sets of the I’m A Freak Baby series (reviewed here and here) you should have a fair idea of what to expect from this further instalment. There are long haired layabout revolutionaries, gung-ho metalhead pioneers, hard rocking tough-nuts, proto-punk yobs pushing anarchic agendas, plug-ugly underground upstarts, basically a whole caboodle of greasy, slack-jawed thugs gleefully clod-hopping all over the UK rock music scene, playing it very fast, loud and loose whilst simultaneously mooning the boring NME and Melody Maker hacks who looked snootily down their noses at them and with a big up yours to the out of touch rock star elite. Defiantly street-level and simply created, the raucous row these denim and leather-clad kids produced worked as direct contrast to the more complicated and earnest progressive rock crew. As such, these primal screams were a real foreshadowing of punk rock.

For example West London band Stray’s second album Suicide, the title track of which starts off I’m A Freak Baby 3, was promoted by a piece of pure punk rhetoric by their record label Transatlantic. Quoted in the accompanying booklet, it says that the band has been formed “as a violent answer born out of the boredom of Secondary Modern schooldays and suburban street nights” (though perhaps the meant fights instead of nights?). The tune itself is a thudding, fuzzy blues rock workout with none-more throaty vocals and a speeded up guitar and drum section, which all leads up to the chaotic denouement. May Blitz follow with more fuzz against a relentlessly basic rhythm on the racing proto-metal of For Mad Men Only and Moot The Hoople, who lest we forget were the teenage obsession of Mick Jones, pre-empt the glammy end of punk (not to mention The Ultimate Warrior’s WWF theme tune) on The Moon Upstairs.

Killing Floor started out as a South London blues band, but by the end of 1970 had developed into a rawer proposition. Their song Fidel Castro might now have songwriter Mick Clarke struggling to recall what he was on about in the lyric, but the tune possesses some real hardcore power. Of course UFO would later become hard rock/heavy metal mainstays. We find them at an earlier stage in their development on the entertaining and hard-hitting Prince Kajuka, though their metal leanings were already in place. Deep Purple’s weirdo funk rock attack Mandrake Root is a mod r&b organ dancer fed through psych and the gritty blues stomp of Nazareth’s Fat Men seethes with menacing brutality.

Of the less well-known acts Scottish band Tear Gas, who included future Skids producer David Batchelor, recall the straight ahead mayhem of Motorhead on I’m Glad. For my money Motorhead took the underground rock sound to its logical conclusion and also centre stage later in the 1970s. Anyway, getting back to the matter in hand, Sweet Slag came from Luton and their rather ungainly (to be polite) name didn’t do their prospects too much good. However their fast but strange psychedelic-tinged blues riffing on Flavour Of Decay isn’t without interest. The very cool, Stoned, with some great gospel backing vocals, comes from Scots N.S.U.’s independently released Turn On Or Turn Me Down LP, recorded in 1969. This effort neatly combines bonehead rock might with a chilled atmosphere, until it concludes with a speedy, near-comic coda.

The Deviants and the band that they became on jettisoning Mick Farren, The Pink Fairies, cast a long shadow on underground rock as a whole of course. Slum Lord by the former, from their second LP Disposable, is a good example of their “ten years too early for punk” bite. The Fairies for their part on Teenage Rebel set about a Chuck Berry rhythm and propel it forward with the kind of reckless energy that wouldn’t have shamed The Damned in 1976. This disc is closed out by the crazy mix of harmony pop and rock pyrotechnics that is Save The Life Of My Child by the female-led Mighty Hard and the alternately funky and then ultra-harsh hard rock bounce of Distant Jim’s Cosmarama. DJ were it seems part-funded by bass player Craig Austin selling three hundred pairs of loon pants at the 1970 Isle Of Wight Festival!

Moving on to disc two, Zior’s ungodly antics can be read in more detail in my review of their Before My Eyes Go Blind here. Coming after After Uriah Heep’s storming metallic rocker Walking In Your Shadow, their Strange Kind Of Magic is featured on I’m A Freak Baby 3 and in many ways it sums up the compilation’s essence: heavy slabs of riffage, hints of blues and psych, plus wailing vocals and grunts all held in place by a super-basic thudding rhythm. Hard Stuff follow up with the brash and growling No Witch At All, the late John Cann providing guitar heroics like pretty much no-one else could.

Hawkwind’s mix of Sci Fi, psychedelics and non-stop energy makes them a natural selection for any I’m A Freak Baby set. Masters Of The Universe’s eerie synth effects and unstoppable pace really hits the spot. Described by a Sunday scandal sheet as “a disgusting bunch of no hopers”, which is about as good a reverse badge of honour as a band could wish for, The Edgar Broughton Band I’ve found always easier to digest in small doses. The snotty fuzz of Momma’s Reward included here is decent enough. The Yardbirds are caught live on French TV mid-metamorphosis into Led Zep with Jimmy Page riffing out on a tough Dazed And Confused. It could lead the listener to pinpoint this as the exact moment in time when things changed from psychedelia to hard rock.

Northampton biker favourites Wicked Lady are represented by demo track Why Don’t You Let Me Try, a guttural chug beneath a clear, detached vocal. It’s a really neat and probably accidental effect, but it is a shame on this showing that the band never issued anything in their lifetime. The punky abandon of Grit’s Mineshaft packs a real punch, this Hornsey-based band also never released anything, but this tune simply oozes proto-metal appeal.

Terry Stamp and Jim Avery’s Third World War are very much a shoe-in for this type of collection. They are present on this disc with the full version of Hammersmith Guerrilla, which sounds like a very hoarse Clash circa Give ‘Em Enough Rope, until it works itself into a crying, dribbling crescendo. Incredible. Stackwaddy’s no-holds barred approach also prefaced punk rock, the Manchester loons’ Hunt The Stag sets off at fuzzed up full throttle and simply never lets up.

Straight Out of Preston, Stoned Rose appear very lively on Day To Day, which comes with a heavy helping of the requisite thump. They included in their ranks drummer Chris Allen aka Chris Cross later of Ultravox. The crazy, keyboard heavy sound of Quatermass’ One Blind Mice skirts hard rock, pop and prog skilfully and this disc ends with Trapeze and a strutting blues rocker entitled Medusa. Both bands had strong Deep Purple connections and Episode Six, who crop up between them with guitar workshop Mozart Versus The Rest, provided Ian Gillan and Roger Glover for Purple too.

Near the beginning of the final disc of this set we have Bram Stoker with Born To Be Free. I’m kicking myself for missing the reformed version of the band when they played locally a few years back on the evidence provided here. A lithe bass and keyboard thrust motors things until stun guitars and an assertive vocal cut through, all presenting a heady combination indeed. Budgie’s strict adherence to the fundamentals of hard rock is clear on a blazing Homicidal Suicidal and Return Of The Farmer’s Son finds Phil Lynott and Thin Lizzy in expansive rebel rock form.

Edinburgh band Writing On The Wall’s album Power Of The Picts seemed to be in every second hand shop I visited in the 1980s. Not fair that they were so readily passed on, as the swirling psych/acid rock of It Came On A Sunday has a good deal to offer, not least some fine soulful vocals from Willy Finlayson. Leaf Hound, formerly Black Cat Bone, provide us with the instant no-nonsense buzz of their mighty Stagnant Pool.

The members of Bone were later to make up punk-era group Dead Fingers Talk and had amongst their fans one Neil Megson alias Genesis P-Orridge. Their number Crush has a skipping, unusual tempo that points towards their future direction, whilst retaining a fair amount of hammer. On Ritual by Warhorse, yet another band with Deep Purple roots, metal and a 60s r&b dance sound meet head on and Curtis Knight Zeus were an early port of call for Fast Eddie Clarke of Motorhead fame. They contribute a stinging rock tune in Mysterious Lady here.

Bullfrog hijack the Stepping Stone riff for The Joker, which comes over rough and raw-boned like Jesse Hector’s Hammersmith Gorillas. It is entirely proper that Mick Farren’s fairly straight take on Eddie Cochran’s Summertime Blues, bar some keyboard frills, features. He was, after all, a key figure in the whole underground scene. Reflecting back on the album later, by his own admission at the time of recording he was suffering mentally, having been kicked out of his own band The Deviants not long before. I’m A Freak Baby 3 ends in the ultra-sludge of Spooky Tooth’s riffing hard rock version of Evil Woman.

Though this boxset does run the risk of overlapping with a few other Grapefruit boxsets, I’m A Freak Baby 3 has more than enough quality and personality of its own to make it worthy of close attention. The period from 1968 to 1973 is often written off as downtime in UK music, but as we can see from this set that beneath the MOR mainstream pop there was these incredible crackles of anger and energy. Full of the kind of endlessly satisfying but rudimentary cheap thrills the middle class rebels just could never understand let alone dig, I’m A Freak Baby 3 cuts straight to the heart of the grimy glory of early 1970s British rock & roll.