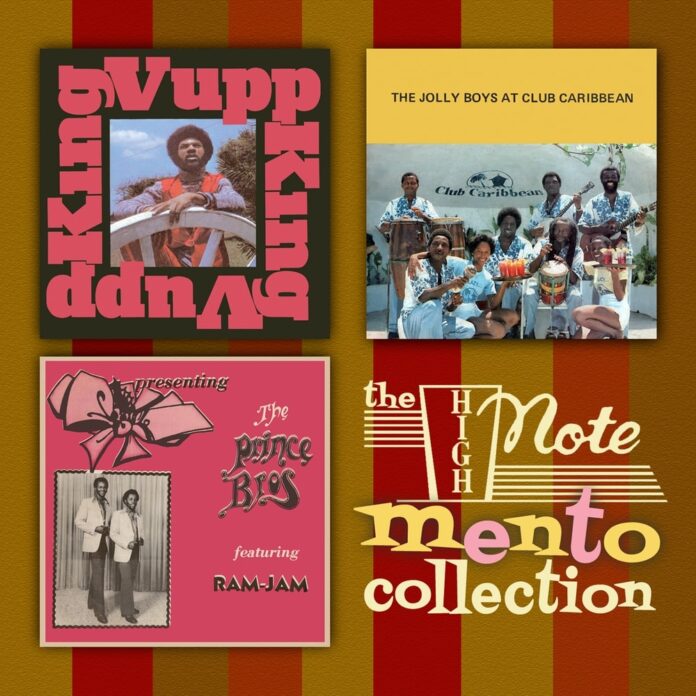 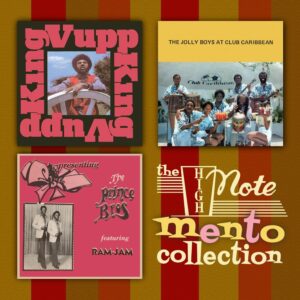 2CD set featuring rare 1970s’ albums by The Prince Brothers, King Vupp and The Jolly Boys, plus various other High Note recordings overseen by Sonia Pottinger…LTW’s Ian Canty gets his mento and calypso in an exotic twist…

As I’ve noted on quite a few reissue reviews over the past couple of years, Sonia Pottinger retained a taste for the traditional Jamaican folk music mento right through the sixties and into the next decade. By the time of the recordings featured here, most of the island’s leading producers were concerned with staying on the “cutting edge” and rarely recorded anything that could be seen as outdated. They generally preferred instead to concentrate on dub and roots, the prevailing sonic trends of the time. Sonia, however, still favoured the sound and saw the appeal that mento held for large numbers of record buyers. So she continued to cut many sides in that fashion and achieved a good level of success with them too.

Mento, similar but not identical in style to the calypso music which emanated from Trinidad, was Jamaica’s indigenous folk music. It was one of the building blocks of reggae and its cross-pollination with rhythm & blues was crucial to Jamaica’s musical development. Mento began to take shape and made its voice known in the early 20th century, with Creole and Cuban influences crucial at its inception. The post-WW2 years found mento at the peak of its popularity. The lyrics were sometimes cheeky, with ribald elements in the songs and also social commentary, something it had in common with a great deal of folk music throughout the world.

As the 1950s went on, US r&b began to usurp it in the dancehalls of Jamaica, just as US-based star Harry Belafonte began to score hits with mento tunes that were sold as calypso in America. Despite it tailing off in terms of popularity, the sound was the crucial, home-grown element in the development of ska. As that gained ascendency on JA dancefloors, mento became a style more for tourists and visitors to the isle. Many mento bands and artists found a steady stream of work playing at hotels.

This new set features the sole, self titled album by King Vupp (aka as one C.A. Kennedy), The Jolly Boys At The Caribbean Club, The Prince Brothers’ Ram Jam LP and assorted bonus tracks. The first two of those albums feature on disc one, along with four extra cuts.

King Vupp’s 1976 album kicks things off with a pop reggae gem in Calypso Rock, the title of which slightly queers the pitch vis-a-vis mento and calypso’s relative differences. However the guitar strum and horns of A Lie Dem Tell, which follows, is rather more clearly an update mento sound for the 1970s. Mento’s status as folk music is reflected in the socially consciousness, Rasta-friendly lyrics of this song and even more explicitly in Dread In A Babylon. The sound also shares a fair bit with reggae too, with perhaps African Book being the best combination of the two styles.

King Vupp’s LP is full of well-performed, thoroughly intoxicating dance music and it is a shame he doesn’t seem to have recorded much afterwards. The Jolly Boys At The Caribbean Club follows. The Boys are probably the longest extant mento group, with a history running back as far as 1945. The understandably convoluted history of the band means that The Jolly Boys featured here were more an off-shoot of the original act than anything else, formed around Allan Swymmer, who had played percussion for the proper version group during the 50s and 60s.

A perhaps more authentic sound than Vupp, they made liberal use of mento standby, the rumba box, also known as a marímbula. This instrument is a wooden box with a hole which has tuned metal strips in it. These are plucked by the player and thus provide an exotic bass line quite unlike anything else. The sound of At Club Caribbean is one of balmy, sun-baked good times and an upbeat, happy atmosphere prevails. However, the lyrics occasionally reveal similar subject matter to the reggae of the time, perhaps not as overt in manner as King Vupp, but social commentary is still there in the likes of Dip And Fall and The River Has Come Down.

The LP begins with a version of Kingston Town titled Jamaica Farewell, something which displays the folk mento ethos and traditional instrumentation well. Club Caribbean itself is a banjo workout and the song Sarah has a cool beat and energy. The Jolly Boys also dip into reggae modes, like on the rocksteady, soulful lilt of I Know You’re A Child and The River Has Come Down, where the rhythm box comes into its own. The slow and soul-flecked pearl The Beautiful Gardens ends The Jolly Boys At The Caribbean Club on a high note (no pun intended).

Finally on this first disc we have four oddities: two Sugar Belly instrumental versions of King Vupp tracks with added floating sax, the reggae crossover Lizard In Bed by Wisdom & The All Stars and Bobby Ellis gives us the lively Ali, backed by the band The Soul Syndicate.

The second disc of this set begins with The Prince Brothers’ LP Ram Jam. The brothers Neil and Rupert Prince are in a much more reggae vocal group style on the first three tracks, bar some subtly applied steel drums on Come Back To Me. Not that they aren’t good – in fact the gospel/pop reggae of the title track is really catchy, but the first sign of anything different comes with the dancing mento jive of Sweet Jamaica.

Next comes a reasonably straight piece of soul pop in There Goes The Bells Of Old before we’re back to a bright reggae sound on Fi Me Something. Here The Prince Brothers hark back to rocksteady, which must have seemed well behind the times in the late 1970s, but now that hardly matters and they pull it off relatively well. Gal And Boy mixes a mento vocal tempo and reggae, before Everybody Wining Their Body goes right back to the Jamaican folk sound. There’s even elements of soca and the dancehall to come here.

The final two offerings on Ram Jam are the appealing, pure reggae nugget It’s Too Late and r&b number My Heart Cries Out. The album is a bit of a rum one, but interesting and with some attractive items. The Prince Brothers aren’t quite finished though, with bonuses of a more modern reggae effort in Jeremiah and Dally With A Chinaman, which was cut under Prince Edwards name. This mixes the two styles well.

The final section of The High Note Mento Collection sensibly takes us back more firmly into mento territory. Count Lasher (born Terrance Parkins) was a big name in Jamaican music in the early 1950s that also dabbled in ska and reggae as the years passed. He’s heard here in more traditional style on merry mento dance tune Ring Ding ’67 and the saucy Winnie The Whip. Patsy Todd was far better known for her rocksteady sides, but she contributes the sweet Little Flea complete with dreamy vibes and Move Up Calypso by Al & The Vibrators captures a rhythm irresistible to the feet. An energetic Party Time by Baba Brooks & His Band brings the curtain down.

Overall this part of the set offers a fair selection of contemporary (for then) mento and it’s full of good, sunny feeling and dance grooves. In summary, I thought the King Vupp album a very good reggae crossover indeed, The Jolly Boys a more authentic mento sound and The Prince Brothers an intriguing combination of the two. The High Note Mento Collection shows that Sonia Pottinger’s faith in the sound was repaid with some pure good-time musical fun. Even all these years on I couldn’t resist tapping my feet as the rhythm well and truly got me. How many other types of folk music can have that effect? Not many I would wager and the best of the tracks here gave me a really warm feeling of summer on a dank December day. Something which only great dance music can do, true magic really.