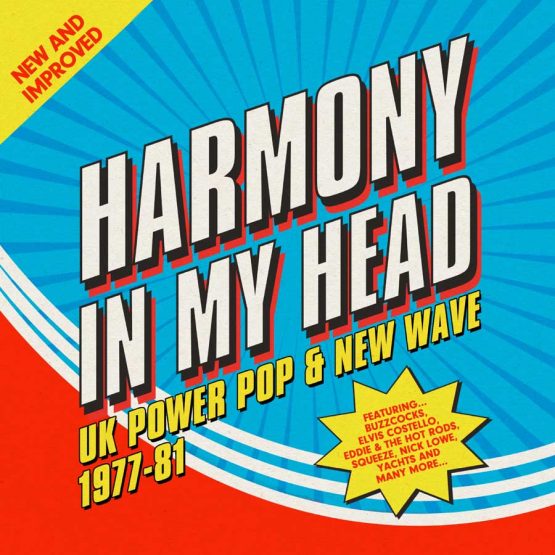 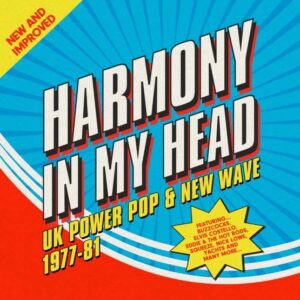 Entitled ‘Harmony In My Head’ this neat 3CD compilation draws its title from the Buzzcocks 1979 top 40 hit, its housed in a clamshell box with artwork that pays homage to the Clash ‘Cost Of Living EP’ and extensive notes by compiler David Wells; it carries the subtitle ‘UK Power Pop & New Wave 1977-81’ and gathers together 76 tracks by an array of artists some of whom might question their links with both new wave and the dubious term ‘power pop’.

New Wave was a term coined in 1977 to describe a raft of artists whose music shared much of the energy of punk, though displayed a greater level of musicianship and use of traditional melody, many of the bands for example Elvis Costello and Squeeze had their first releases on arguably punk record labels; people weren’t keen on the ‘new wave’ term – Nick Lowe coined the phrase “pure pop for now people” to describe his approach, early brand leaders The Pleasers described their sound as Thamesbeat (a literal update of Merseybeat), while a handful of bands (including The Monos! and The Monochrome Set) played regularly at a London club that marketed itself as Newbeat, “a reaction to punk” – none of these terms caught on, though New Beat reappeared in the late 80’s to describe Belgian electronic dance music, a mix of EBM (Front 242 etc) and Chicago House.

Opening with Buzzcocks ‘Harmony In My Head’, a track noteworthy not just for being a further example of Buzzcocks innate ability to craft sublime pop tunes, but more as this was both written and sung by guitarist Steve Diggle, we also get Elvis Costello & The Attractions ‘You Belong To Me’ the B-Side to ‘I Don’t Want To Go To Chelsea’, and hailing from Manchester The Distractions ‘Time Goes By So Slow’ which originally appeared on Factory Records, a track with plenty of jangly guitars, strident vocals and a solid driving bass; neighbours Any Trouble came from Crewe, their guitarist worked alongside Ian Curtis at the same DHSS office and penned ‘Trouble With Love’ which was the bands final single for the Stiff Records label; ex-Pistol Glen Matlock’s Rich Kids are here with their eponymous debut which featured Midge Ure on vocals, and Rusty Egan on drums; time has been cruel to the Rich Kids reputation, granted none of the tracks have the raw snarl or any of the real energy of the Pistols, but there is a certain pop appeal within the careful constructed material. 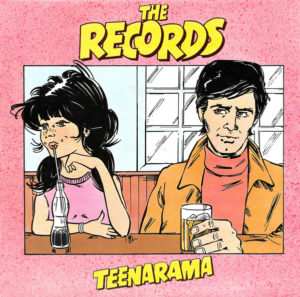 The Records are often referred to as power pop royalty, they included former Kursaal Flyer Will Birch in their ranks, its clear they knew there way around a melody or two; ‘Teenarama’ was the bands third single and includes by todays standards some questionable lyrics; “You sure had a lot/ To say every night/ I thought that a younger girl/ Could show me the world/ That was right” despite a hugely appealing melody the track bombed and the band subsequently folded… Yachts hailed from Liverpool and included future Christian Henry Priestman in the ranks ‘ Suffice To Say’ was produced by The Records Will Birch, despite these obvious talents the track is weak and a confusion of styles (for Yachts finest moment dig out ‘Do The Chud’ which is credited to The Chuddy Nuddies and appeared on the reverse of the  legendary Big In Japan ‘Brutality, Religion And A Dance Beat’ 7″ (both are available on the Cherry Red ‘Revolutionary Spirt Liverpool 1976 – 1988’ 5CD compilation); not so The Boys ‘First Time’ the version included here being the not originally release extended version, a gentle tale of a lucky lady losing her virginity built around an instantly recognisable guitar riff and crashing cymbals that can still be heard on various festival soundtracks each year.

The Pleasers were Thamesbeat, it’s a straight pastiche of the Beatles, nothing more, and to me what’s the point; I’d suggest the public agreed as despite loads of press and publicity they had called it a day before 1978 was out; Squire were mates with The Jam and were more a mod band than a power pop outfit, though the lineage from power pop to the UK mod revival is clearly evident; good to hear the appallingly named The Donkeys ‘Strike Talks’ the track pins itself to Paul Wellers song-writing style, the track failed to reach a substantial audience, writer and vocalist Neil Ferguson later appearing as a member of anarcho chart bothers Chumbawamba… Bleeding Hearts ‘This Is The Way…Ok’ is a genuine rarity, released on the tiny Crazy Plane label in October 1980 and gaining support from John Peel, its well written, with an enticing dark undertone, and featured measured drumming from later Balaam & The Angel member Mark Morris.

UXB hailed from Walsall ‘Crazy Today’ was their only release a limited edition of just 1000, a decent condition copy of it can command around £50 these days, it’s a stand out track that firmly sits under the new wave banner, over stuffed with youthful energy and excitement, exactly how your first release should be, and easily justified a Japanese re-release back in 2001. 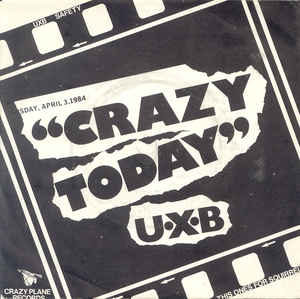 Disc two opens with Eddie & The Hot Rods ‘Do Anything You Want To Do’, a track everyone should be familiar with; initially pre 76’ pub rock band, they were supported by the Sex Pistols in February 1976 and were forever associated with punk rock, though this track wasn’t issued until July 1977 taking them into the UK chart, peaking at an impressive No. 9.

The Photos featured Wendy Wu (Wendy Cruise) on vocals, as a 16yr old lad in 1980 that is all that mattered about The Photos, they were originally called Satan’s Rats before the pop re-brand (apparently they asked Big In Japan’s Jayne Casey to front The Photos, she wisely declined – now that would have been interesting!!)

I’m not sure where Ruts fit into either power pop or new wave, granted they never declared themselves to be a punk band, preferring to find their own audience – but any opportunity to hear ‘West One (Shine On Me)’ is welcome, this being the original August 1980 Virgin 7” release following the tragic death of frontman Malcom Owen.

The Circles were from Wolverhampton, initially under the moniker The Injectors they played the West Midlands punk circuit, but as the scene moved on they rebranded; ‘Billy’ was the flip of the debut 7” ‘Opening Up’ a decent copy of which can also command around £25, this could easily have been written by Cock Sparrer, its got all the elements of a classic Sparrer anthem; huge sing-a-long chorus, from the heart lyrics and a neat guitar riff. 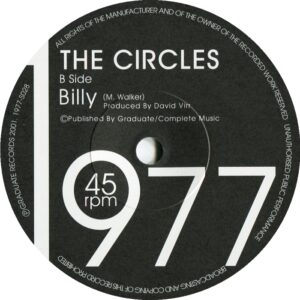 The Piranhas ‘Jilly’ has a certain naïve charm, borrowing from the late 60’s, similarly The Really 3rds ‘Everyday, Everyway’, the band came from Pontypridd in South Wales and was released via their own label The Really 3rds Record Label in April 1981, this is an energetic indication at their later transition into mod band Shake Some Action. Former Rich Kid Midge Ure produced The Snips ‘9 O’Clock’, which was released via EMI in 1980 in the UK, Germany, France and Belgium, listening back now this could have been released at almost any time within the 80’s, there are elements of keyboards which could have graced a Visage release… but that will be the Midge Ure influence.

Going Red was a another guise of then drama student Graham Fellows (aka Jilted John) who had already graced the Top Of The Pops studio with that song about a certain moron, ‘Some Boys’ is a ridiculous paean to the old adage “cleanliness is next to Godliness” and was on the flip side of a Freshies single, hence the reason Chris Sievey is namechecked. 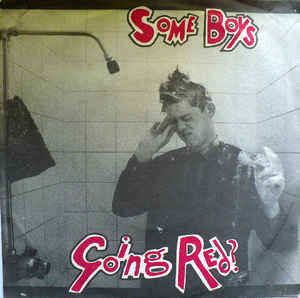 Chelsea open disc three, in their initial incarnation they were a punk band, this changed when members Billy Idol, Tony James and John Towe departed to form Generation X, this left frontman Gene October who with a new band released the classic ‘Right To Work’ in June 1977, the band dabbled with a variety of styles, ‘Look At the Outside’ has clear glam elements… New Hearts ‘Plain Jane’ is a taut roustabout stomper featuring vocalist Ian Paine, the band later evolving into Secret Affair, you can hear elements of the later in this summer 1978 release courtesy of CBS Records which in its original format is getting harder to find…. New Musik are much better remembered for the 1979 worldwide hit ‘Living By Numbers’ its all thin ties, sunglasses and subtle keyboards on their debut ‘Straight Lines’ and a sign of things that followed.

Fast Cars took their name from the Buzzcocks track, they went onto support Shelly & Co as well as Joy Division and XTC, this is a perfectly balanced track that couples the youthful energy of punk with the ability to play a guitar… I was hoping my memories of Knox ‘She’s So Good Looking’ had improved; they haven’t, this solo release from The Vibrators frontman is cheesy, pop by numbers, and until now wisely forgotten.

Eater were famous for having an average age of just 15 years, as such you could hardly expect any ground-breaking musicality, ‘My Business’ was lifted from their debut album ‘The Album’, its certainly one of the better tracks, a perfect example of youthful energy overriding any particular talent… The Dodgems were from Brighton and released ‘Science Fiction (Baby Your So)’ in late 1979, as befits the title it’s an early contender for the then nascent ‘futurist’ scene, and today sounds like The Cravats given a Casio keyboard to abuse which cant be a bad thing! 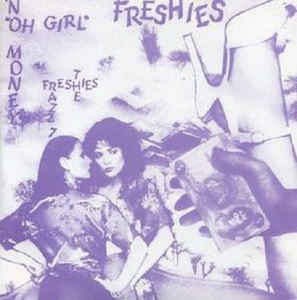 The Freshies ‘No Money’ sadly summed up Chris Sievey’s cut-short life, he was responsible for a frankly bewildering array of releases throughout the late 70’s and 80’, most notably the genius ‘I’m In Love With The Girl On the Virgin Manchester Megastore Checkout Desk’ if you are even vaguely familiar with that then check out this genuine power pop classic complete with propulsive beats, hand claps and a skip full of hooks, and melodies.

Other worthy mentions go to The Trainspotters who released ‘High Rise’ in August 1979, the track was written by Radio 1 DJ Mike Read, the actual identity of the band remains a mystery, the track later adapted into a jingle for Read’s radio show, and The Searchers, yes the Liverpool ‘Sweets For My Sweet’ & ‘Needles & Pins’ outfit who were relaunched by Sire Records in 1979 with ‘Hearts In Her Eyes’ which was written by The Records Will Birch neatly bridging the time gap between the mid 60’s and the new 80’s decade.