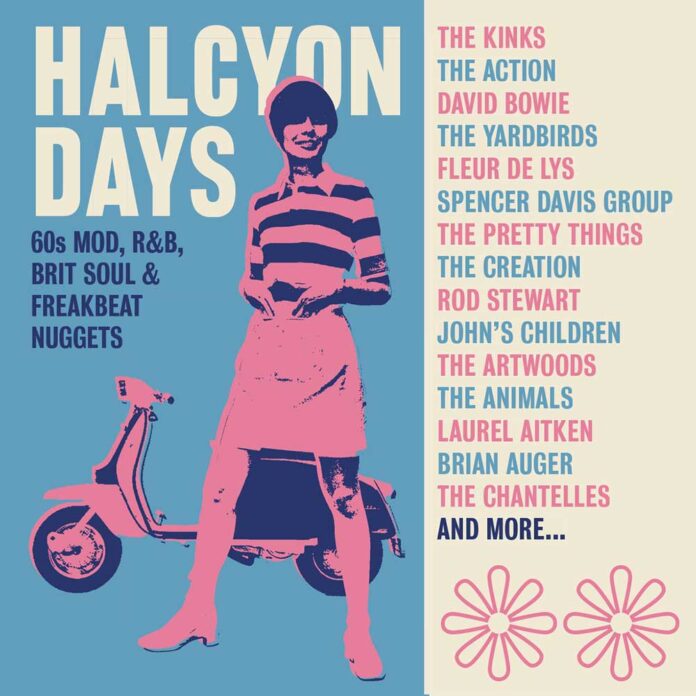 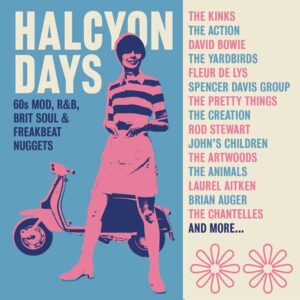 Subtitled “60s Mod, R&B, Brit Soul & Freakbeat Nuggets”, this new 3CD set takes the listener back to the middle of swinging decade with the help of The Animals, The Creation, David Bowie, Brian Auger & The Trinity and many others….LTW’s Ian Canty gets his mind blown by the crazy sound, the ol’ duffer that he is…

This new collection, Halcyon Days, follows on from the many 1960s RPM boxsets of recent years and as that imprint passes away into memory, Strawberry picks up the baton. Included are a familiar mix of rarer selections from chart staples (for example, The Animals, The Kinks) 1970’s stars to be (David Bowie, Rod Stewart) and some complete unknowns that never even got to the stage of actually releasing a record (Force Four and The Trendbender Band for a starter). This is done to hopefully provide an in-depth picture of the UK’s music in the mid-60s.

In order to achieve this, a difficult balance must be struck. There should not be too many much-heard old favourites included. If there is, a risk that the comp becomes indistinguishable from the kind of “I Love The 60s” albums available at supermarkets everywhere emerges. The other extreme is that too many obscurities or tracks that were obscure for a reason can impact negatively on the flow and listenability of the set. How does Halcyon Days fair? Well, we shall see.

The first disc of Halcyon Days is very much in the mod r&b dance style and still at some points retains hints of the jazz/blues that the original modernists dug much earlier in the 1960s. Chris Farlowe And The Thunderbirds’ Buzz With The Fuzz, complete with organ siren sounds, makes for an exciting start and we continue in a hot dancefloor mode with soulful cuts What’d I Say and Big Time Operator by Duffy Power With The Graham Bond Quartet and Zoot Money’s Big Roll Band respectively. All three of these tunes combine to give you a fair idea what a hot night down the Flamingo Club might have been like, even if you weren’t even thought about at the time. Then comes The Animals’ excellent soul/freakbeat version of Goffin and King’s Don’t Bring Me Down, with stuttering fuzz guitar much to the fore.

The party hearty atmosphere is very much enhanced by the excellent Ronnie Jones single Little Bitty Pretty One, but doesn’t let up through cuts by Rod The Mod, The Stormville Shakers and Jimmy James & The Vagabonds. Jimmy’s old club scene rival Geno Washington gives us the cool, organ and bass-driven All I Need and Laurel Aitken has one of his more soul-based outings on I’ve Been Weeping And Crying.

He also crops up later on this disc with another self-penned number Looking For My Baby, this time in his more traditional ska style. In fact this section of the disc lurches ska-wards too with Mickey Finn & The Blue Men’s Hush Your Mouth and West London’s mixed race band Rupert & The Red Devils, perhaps an early precursor of The Specials on their infectious and bouncy rhythm Every Time I Do.

A stirring Gotta Brand New Man by Barry St. John aka Ella Thompson and Feltham’s The Trendbender Band’s version of the Solomon Burke tune Stupidity, taped as a a demo, bring this section of Halcyon Days to an end. The former adeptly depicts a talented vocalist at the top of her game and latter proves just why they were highly rated on the gig circuit. For me this disc is the most consistently enjoyable the three included here, with good vibes all the way through.

Going on to disc two, here the general feel leans a tad more heavily on mod pop/freakbeat and garage r&b sounds. The first seven tracks are uniformly excellent. The Creation’s Biff Bang Pow is perhaps a sound that 60s fans may be well accustomed to, but even so it is still an ebullient piece of driving beat mayhem. Superb freakbeater She’s Got Everything by The Kinks was the flipside of the Days single and The Yardbirds’ lively Stroll On was featured in Antonioni’s film Blow Up, just at the point where Jeff Beck smashed his guitar in emulation of Pete Townshend.

A young David Bowie shines with some heartfelt singing some distance away from his Anthony Newley affectations on Do Anything You Say and The Pretty Things are in rough and ready top form on Buzz The Jerk. The Artwoods and Ready, Steady Go! favourites The Bo-Street Runners also do impressive turns, with the former applying abundant swagger to I Take What I Want and The Runners’ own theme tune being a smart and chaotic r&b rave-up.

After opening up with such intensity and quality, things understandable drop off a bit. Still, there’s a fair amount of interest left to enjoy. John’s Children kick up a storm on one of their better numbers Remember Thomas A Becket and Force Four, later to evolve into Rainbow Ffolly (who feature themselves with sunshine pop/soul song Gimme Little Sign), acquit themselves well on Come On Go, which sounds a little like George Fame gone freaky.

Dorian Gray, real name Tony Ellingham, pulls a similar “freakbeat gone soul” trick on Get Goin’ Baby and is also heard in more standard but pleasing soul style with Walking Down A Backstreet. It is a little hard to believe that Brian Auger & The Trinity’s Tiger was cut in order to make Columbia sack them, as it is such thoroughly enjoyable silliness. No wonder it became a firm favourite that fans still love today.

Tornados’ bass player Heinz makes a very game attempt to bring himself up to date on a tough tune I’m Not A Bad Guy and the fuzzy and fast Got The Blame by The Worrying Kynde hits a neat crescendo of distorted guitar and rolling piano. The Secrets, featuring talented singer/songwriter Clifford T. Ward, offer up a very agreeable groove somewhat akin to the Small Faces on She’s Dangerous and Wynder K. Frog’s dance party version of Green Door curtails this second disc in a high-spirited manner.

By the time we reach the final disc of this set we’re in more pop sike territory, though dance-orientated and freaky influences still come through. The gentle psych pop title track by Sweden’s Tages is quite lovely and The Action follow with more or less the perfect melding of their mod soul past and trippy future in Look At The View.

The wah wah on Fleur De Lys’ One Girl City adds another layer to what is a cool psych/blues mixture and the post-Steve Winwood Spencer Davis Group feature twice, with a duo of soul-tinged goodies in Moonshine and Picture Of Her. Sleepy, who included drummer Ian Wallace later of King Crimson, supply Mrs Baily’s Barbecue And Grill and it is a real daffy delight, even including a spoken-word recipe in the middle!

Truly Smith (actually Josie Walker from Warrington) gives us the dramatic This Is The First Time, a very pretty big production pop item and Greg Lake is shown serving his apprenticeship in The Shame’s big keyboard sound of Dreams Don’t Bother. Being a fan of mod/soul bands gone weird in the late 60s, I dug The Alan Bown!’s smooth Technicolour Dream and the edgy guitar/flowing beat pop of The Australian Playboys’ Sad is another jewel to be discovered.

I’ve loved Turquoise since discovering them on The Further Adventures Of Flossie Filett comp LP and their 53 Summer Street that is featured here does draw comparison with their friends and neighbours The Kinks. Rod Stewart shows up as part of the unissued at the time band Quiet Melon, which also contained members of The Creation, The Artwoods and Small Faces. The dual vocal of Engine 4444 can’t hide Rod straining at the leash, but some nice blues piano eases the way and it’s an engaging number. Finally we have Arthur Brown again proving what a great soul singer he is on the beauty of Rest Cure, a comparatively muted performance for him (and nothing is set on fire either).

In the final analysis Halcyon Days does provide a fine listening experience that gives one at least an eye into those heady mid-1960s days. A pretty good balance is achieved for the duration, with nothing much being too hackneyed or jarring. There must be an end to the delving into the lesser-known music from these times at some point, but from the evidence presented here, that may still be some way off.