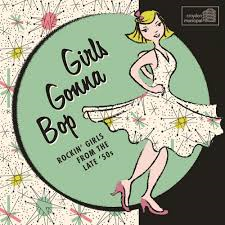 25 track collection of rare and wild female rockers, along with some better known artists like Wanda Jackson and Jackie Deshannon, who gamely tried to beat Elvis, Jerry and Buddy at their own game…..Ian Canty takes a red hot trip to Flipsville and back again…..

Croydon Municipal is fast developing into the go-to place for eye-popping 50s cornucopia and this album can only add to the legacy being developed. They’ve blindsided us with the overpowering and thrilling atmosphere of Soho in its melting-pot heyday, the sounds of smoke filled coffee bars and clean as a whistle soda shops and now they’re coming at us again with some sparky original femme rockers who were kicking ass nearly 40 years before “Riot Grrrl” was invented.

This new compilation consists of rare recordings by female singers/musicians made during the early years of the Rock n Roll explosion and though of course there’s a lot to appeal to the dedicated 50s collector, there’s also more than enough here to keep new converts entertained and moving (my 12 year old daughter judged “Girls Gonna Bop” a “hit” and was pleased to find that most tracks were just the right tempo for her to practice what she has learnt at her dance lessons).

Thought mostly a collection of lesser lights, the bigger names here weigh in with some quality performances. Wanda Jackson has seen a huge upsurge in interest in her music during the new millennium (patronage from the Cramps among others helping) and “Sparkling Brown Eyes” is more proof of just why this attention has been totally warranted. Raw, tough, exciting and more than a match for what the boys were turning out at the same time, it is marvellous. Jackie Dee later found more fame as songwriter under the nom-de-plume Jackie Deshannon (in fact I saw her first live performance in the UK, which was only about 10 years back) and prior to her 60s run, which saw her support the Beatles cut her selection here, the full-throttle “Buddy”.

“Girls Gonna Bop” does dip its toe in the influences on Rock n Roll which still were showing through strongly on some of these recordings. The marks of Blues, Country, Jazz and even a little Doo Wop are present, the constituent flavours that made up Rock are still shining clear despite the modern (for then) accoutrements. In the Blues corner we have the brilliant “Black Cadillac” sung by Joyce Green. I’ve always loved that song and it’s a tale of females taking no bullshit from men too! Joyce Green hits just the right, vengeful tone here and it is such a shame that this was her only record (and she was only 19 at the time of recording!). The big voiced Annisteen Allen follows a similar path rocking up a wild storm with “Rough Lover”.

Coming at things from a more country direction was Anita Carter, unsurprising really as she was a scion of the famous Carter family. “He’s A Real Gone Guy” is slightly unusual too in that it has female backing vocals as well as a lead (the backing vocals on most tracks here tend towards males as a contrast in sound) and Linda Glover crosses the divide between the Grand Ole Opry and a teen hop elegantly on “Counting Sheep Over You”.

More straightforward rockers are “Brand New Cadillac” cop “Flipside” by Stormy Gayle which is raucous and thrilling enough for you to forget about the source material and Laura Lee Perkins cashes in on the similarity between her name and Jerry Lee’s with the boogying piano at the forefront of “Don’t Wait Up”. Despite a couple of more workaday efforts (Janis Martin’s Presley tribute “My Boy Elvis” seems to me merely a pop version of “Shake, Rattle And Roll” and Bolean Barry’s “Long Sideburns” veers a bit too far towards pure novelty for me) but on the whole there is much to enjoy as these female singers grab their chance (and for some it was their only one) with irrepressible energy and no little talent. At the time of release most of these slices of vinyl pretty much disappeared, but that is now remedied by the bold and vivid life of the recordings presented here, they really do sound great. You also get pen pictures of the stars in the sleeve-notes too, which adds up to another nice package put together by CM.

“Girls Gonna Bop” lives up to the statement of intent in the title – there was simply no standing in their way. Anyone with an ear for top Rock n Roll sounds and an urge to jive dig in!