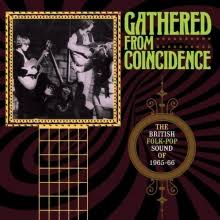 Subtitled “The British Folk-Pop Sound of 1965-66” this new boxset documents a time when the previously grass-roots Folk movement came to take centre stage as part of 60s Pop Music. Ian Canty is persuaded to only put one finger in his ear to cop of load of this little lot….

Gathered From Coincidence, or perhaps by coincidence? Looking back they do seem strange bedfellows for a musical ménage à trois, Folk, Pop and Rock & Roll and oddly enough what they conjured up together became the bedrock of the progression of music during sixties. But these musical forms were miles apart as recently as a decade earlier. Folk music was earnest, rootsy, played in small clubs, somewhat lacking in style, being more concerned with social issues like CND, whereas R&R was all about the look, the cool and the local hop. Also Folk’s adherents eschewed chasing success and looked down on Pop Music as unwanted and low-brow commercialism. It was difficult at the time to see these separate worlds colliding, but the media furore around a certain Robert Zimmerman would play a large part in the Folk Pop/Rock union being forged.

Dylan’s huge influence towards the middle of the decade on the Beatles (among others) brought the two beams closer together and when he “went electric” the floodgates truly were opened. The Fabs in the UK and the Byrds on the other side of the Atlantic became the standard bearers and by the middle of the decade the musical mix was all the rage for bands to dip their toes in with the odd song or two, or even more. Even Rock & Roll roughnecks like the Pretty Things had a go (disc 3 track 15, their moody stomp through London Town). 1965 was probably the year for Folk Pop/Rock, after that Psych elements began to creep in, but for those 12 months it became a big time craze in both the US and UK. The British end of things is what Gathered From Coincidence focuses on.

It makes total sense for the Searchers to open up a compilation about 60s UK Folk Pop. They were verging on being the forgotten men of Merseybeat, but they took to the Folk Rock sound as naturally as anyone else in the UK and made it their own. Not strong songsmiths themselves, they became great interpreters instead and here they give us a delightful reading of P.F. Sloan’s Take Me For What I’m Worth. Their former singer Tony Jackson comes up trumps too, now accompanied by his new generically monikered group, with a Beat-heavy and neat cut of an early Warren Zevon song Follow Me.

While there are obscure artists present, this compilation does not ignore the more well-known, with early recordings by Marc Bolan and Olivia Newton-John (a world away from the MOR of her near future with a rough and ready go at Jackie DeShannon’s Till You Say You’ll Be Mine). The Zombies too were successful and one cool Pop machine to boot, You’ve Been On My Mind gives Colin Blunstone’s immaculate voice ample opportunity to shine. Not quite as well known as St Albans’ finest, but in the same vein are the Beatmen, who score with the fine Now The Sun Has Gone. Back to more famous names, Marianne Faithfull proffers the gorgeous Come And Stay With Me and Twinkle’s smartly observed and self-penned Golden Lights is a delight (and was covered by the Smiths in the 80s). Disc 1 of this boxset is a joy to behold, beautiful listening all round.

Disc 2 of this boxset doesn’t quite match the first selection and broadly features more authentic examples of Folk, rumly set side by side with Dylan spoofs and naysayers. Though Bob Dylan had a huge legion of converts, there were a few who couldn’t see what the fuss was about and had no trouble expressing those opinions in the exact manner of the target of their ire. Satirist Allan Klein’s pastiche of Barry McGuire’s Eve Of Destruction, the sarkily entitled Age Of Corruption, is expertly constructed and the excellent Sorrows give Bobby D a scathing take down with their double negative classic Don’t Sing No Sad Songs For Me. It is odd to hear John Cassidie’s cynical Talkin’ Denmark Street and Misha’s The Protest Singer alongside the authentic Trad Folk of the likes of the Ian Campbell (a faithful cover The Times They Are A-Changin’), but in accurately documenting the times you have to take the rough with the smooth.

Away from such concerns the mercurial Murray Head provides a soulful and dramatic reading of Folk standby The Bells Of Rhymney (also covered by the Byrds) and Nicholas Hammond’s Please Don’t Switch Off The Moon Mr Spaceman brings together Beat and Folk elements in a highly agreeable way. The Other Side’s Punky Like A Rolling Stone contrasts nicely with Barbara Ruskin’s re-write of practically the same song Well, How Does It Feel and the Four Pennies Square Peg is a real goodie in the Substitute-era Who mode.

On the final disc of Gathered by Coincidence we move away to the parodies and more towards either straight Pop bands having a dabble, people who came up through the Folk Clubs who weren’t afraid to try something new or a few early Rock idols having a bash at the latest thing in an effort to bring themselves up to date. Both Adam Faith and Heinz, whose charts days were mostly behind them, have a decent dig at the new sound, with the rolling Folk Pop treatment Faith gives to Bob Lind’s Cheryl’s Going Home probably just nicking the spoils. Going even further back, Skiffle king Chas McDevitt hooks up successfully with Shirley Collins on a recut of Dylan’s Subterranean Homesick Blues and Folk guitar legend Davy Graham gives a heart-breakingly vulnerable vocal to Lennon and McCartney’s I’m Looking Through You. The Beatle duo also provide You’ve Got To Hide Your Love Away for the Silkie and it is a peach of a version too, with male and female vocals combining superbly.

Ray Davies wasn’t one to trend-hop and although there’s a tinge of Folk included in Wait Til The Summer Comes Along (intended for an EP of Folk tunes that never came to fruition), it has that indelible Kinks stamp of quality on it. Beverley (Kutner) was married to John Martyn, but she was also an artist in her own right and the Blues raunch of Picking Up The Sunshine aka (Bert’s Blues) has added support from Jimmy Page and John Paul Jones, not long before they departed the session scene for Led Zeppelin. Dana Gillespie was a real talent who spent part of the 70s being looked after by David Bowie’s management Mainman, her Thank You Boy speeds up and down eccentrically, but is endearing and elsewhere we have the singers of the memorable Follyfoot theme (The Settlers, who add a bit of Soul to Early Morning Rain) and Greta Ann’s strange and engaging vocal style on Sadness Hides The Sun.

The Seekers had to be on here really (though they were from Australia they recorded their hits in London), they were a lot of people’s first thought if the subject of Folk Pop was raised. A lot of their appeal hinged on Judith Durham’s wonderfully pure voice, making their version of the Springfields’ The Carnival Is Over solid gold. This collection ends on a marvellously incongruous note with Tony Hatch’s Crossroads theme – the justification is a 12 string guitar was used on it – whatever it was grand to hear its evocative tones once more.

After 1966 the Folk influence faded a little from the forefront of Pop/Rock, but its import would never completely go away, become a base element of a great deal of popular music over the ensuing years. It effectively became enmeshed in the Pop Music discourse in the years 1965-66 documented here and so complete was the positive elements of the Folk infiltration that there was no real going back afterwards.

Happily, to enjoy Gathered By Coincidence you do not need to be a Folk music aficionado at all, just a fan of glittering 60s Pop. Grapefruit do the usual thorough job on including diverting sleeve-notes and presenting the collection handsomely, but the music contained is the star, being hugely loveable on the whole. This box is packed with excellent tunes in a wide variety of styles which are great fun to listen to and represent a boomtime for UK Pop, even if you think the best Dylan was the one out of The Magic Roundabout!