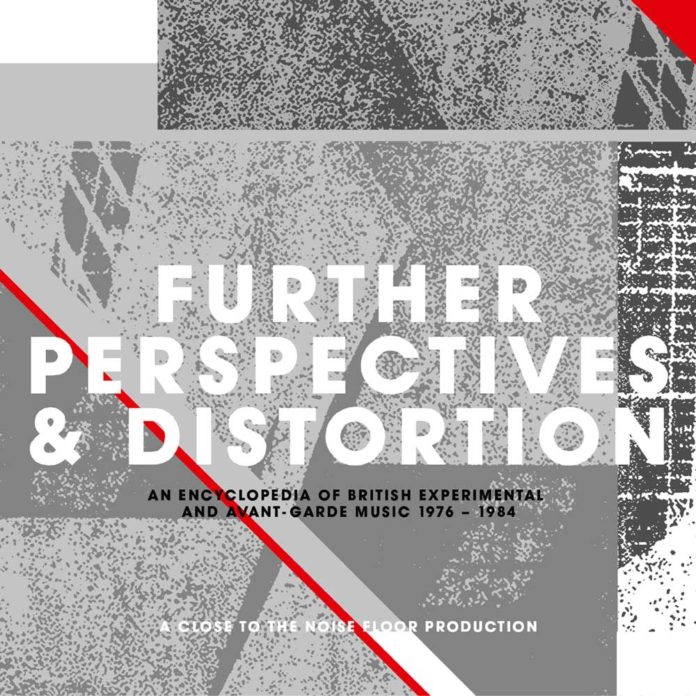 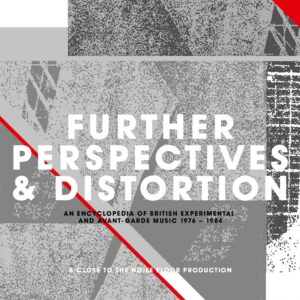 One thing that we must establish at the outset is this isn’t a reissue of the 1981 Cherry Red compilation album Perspectives & Distortion. Some of the bands/artists featured do appear, though not with the tracks on the original LP. Instead we have “An Encyclopedia Of British Experimental And Avant-Garde Music 1976-1984”. It is a bit of a shame that CR have opted to go down this route, as a reissue of the LP plus two discs of similar material would, on the face of it, seem perfectly acceptable.

The liner notes seem to hint at Perspectives & Distortion not being a particular cohesive set, with Five Or Six rubbing shoulders with Cherry Red standbys like Morgan Fisher (though they do again on here). But then again experimenting with musique concrete, found sound and loops pre-dated punk by some distance and some of the experiments here do have a lot in common with free-form freak out recordings of the late 60s.

CR have gone with this box being a musical encyclopedia as part of the successful and enjoyable Close To the Noise Floor strand. As such it slots into place alongside those comps and also the recent art rock set Lullabies For Catatonics too (reviewed here). Alphabetical order is applied, which fulfils the encyclopedia concept, but doesn’t leave much room for producing an effective running order. I suppose the inference is that these pieces are so weird that normal rules don’t apply.

Quite a lot is made in the booklet that accompanies Further Perspectives…. about how punk was just a basic re-casting of rock & roll and how punks reacted violently to ATV, Pop Group and others who pushed at the boundaries. Bit of an overplayed hand, but mostly true. The fact is that a lot of people attracted by punk wanted it to remain the same, like a lot of pop music fans they didn’t really respond well to change. My viewpoint has always been you could appreciate the near-rock stuff and weirder elements together, there was no law against liking both. The spicier the better as far as I’m concerned, so I was fully primed for this set. Because make no mistake, we’re far from the cosy punk-funk of a thousand Gang Of Four copy bands here.

Starting in strict order means we begin disc one with “A” artists and of course Alternative TV had to be here. Their The Force Is Blind/Lost In Room single was a goodbye to the name as they shortly became the Good Missionaries and the top side is featured here. It’s still unsettling, the bells, drones and high voice of Anno from Here And Now giving way to a fracas in which Mark P rants “they came and stopped the fun”, which was apt given the messy circumstances of ATV’s demise, amidst endless cries for Action Time Vision and bottles thrown.

This song was clearly about the restrictions of punk, but a few featured on the first disc here could have done with a little structure. Alterations’ 10 minutes plus of Trails Of Tears veers from self-conscious messing about to the occasional moment of humour, but it is a long time to listen to something that for the most part sounds like tuning up. I doubt if many punks were showing up telling them to play something they could pogo to instead either. Alterations were part of the London Music Collective and this organisation was no doubt important in nurturing experimental post punk music in the capital, but unfortunately Paul Burwell and David Toop’s track named in tribute of to it LMC is similarly a bit aimless.

Better is Art Bears’ superfast Rats And Monkeys which comes at one from all angles, shifting the moment you could pin it down. It is weirdly addictive, as is Chris And Cosey’s The Giant’s Feet. The Bodhi Beat Poets Positive Paranoia/The City In the Sea is effectively two separate pieces stitched together, but both are skilfully done proto-rap which work very well. Clock DVA underline what a good outfit they were on the hypnotically brooding Exercise In Magnetic Tape No 4 and Blancmange are miles away from Living On the Ceiling on the rhythm-driven cool of Overspreading Art Genius. Eyeless in Gaza also impress on John Of Patmos, sounding like Theatre Of Hate heard from a dark, spooky belfry.

The quick tribal drums on Faction’s Burning Feet get disc two of Further Perspectives… off to a good start and Think by Five Or Six is another goodie, watery repeated sounds on top of guitar and synths, the howling vocal commenting confusingly “weather permitting, I couldn’t decide”. Nocturnal Emissions electric bleeps and squiggles make their Down The Sink almost Electropop turned inside out and producer Martin Hannett and Steve Hopkins team up with Nico for the beautiful and quite stunning Procession. Hula were among the next generation of Sheffield bands with links to the Cabs, their Junshi develops with energetic cymbal splashes into a pummelling cacophony (but in a good way).

Arguably a track like (Extract From) The Compassion and Humanity of Margaret Thatcher, that it consists of total silence like the similar Wit And Wisdom Of Ronald Reagan album, works better as a one-liner joke than actually taking up four minutes of the running time. The tense and bass-driven drive of Mark Perry’s Death Looks Down uses noise effectively and Psychic TV, at the time of recording a major label band with a near hit single in Godstar, bubble menacingly on In The Nursery.

The final disc gets underway with Robert Rental’s 1978 single Paralysis, guitar and treated vocal combining well over a synth rhythms. The Sound and Echo And The Bunnymen were big noises in the new wave in the early 80s, but here next we find principal members engaged in more outré pursuits. Second Layer was the Sound’s more experimental alter ego and here they offer us the scratchy paranoia Japanese Headset. Scene X, by Will Sergeant of the Bunnymen, follows with unsteady whirls and careful percussion plotting its path.

This part of the collection is the strongest and most enjoyable – if that has any real currency in the parameters this set exists in. There’s a punk pop song struggling to get out of the savage cuts of Nigel Simpkins’ Scattered Strategies/Oblique References and the Swell Maps use a driving drumbeat bouncing off an organ drone and chimes on Robot Factory. Soft Machine slow down the pace with the sparse Kayoo and Test Dept use the found sound of religious zealot radio shows on top of their surprisingly gentle pummelling on WWBC. The Pop Group give us the first sign of a real groove on Amnesty International Report, but the calmly stated vocal is simply harrowing.

This Heat were caught between art rock and punk experimentation, but managed to admirably combine both. They utilise dub effects coolly here on 24 Track Loop. It’s saying a lot for this compilation that the nearest thing to a pop song is Throbbing Gristle’s Zyklon B Zombie, but it is true. Later on Robert Wyatt loops in massed vocals on Rangers In The Night, one of a number of short tracks taken from Cherry Red’s Miniatures (also including Robert Fripp’s spacey piano title track and George Melly’s nonsense speak tribute to Dadaist Kurt Schwitters entitled Sounds That Saved My Life). The set ends with Zos Kia’s clanking movement and bass Baptism Of Fire, the band yet another TG off-shoot.

The booklet which comes with Further Perspectives And Distortion is a little too thick on theorising and setting the context, at the expense detailing the history the outfits that provide the music. Since a lot of them are pretty obscure, it’s a bit of a shame and a missed opportunity – the other sets in the Close To The Noise Floor series have generally been most illuminating. However, when you get past that and the less interesting tracks there is plenty for the more adventurous ear to enjoy. There no doubt was some fearless experimentation going on and when successful it sounded like nothing else that went before, opening up new vistas of sound.