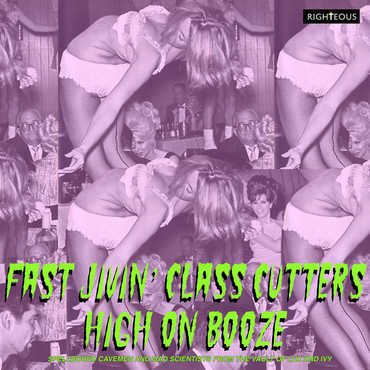 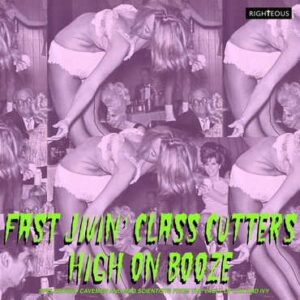 Should there be a record industry prize for the longest album title of the year then this 2CD compilation would surely take the plaudits!

In full we get: “Fast Jivin’ Class Cutters High On Booze – Spellbound Cavemen and Mad Scientists From The Vault Of Lux and Ivy” – pray this is on display in your local wax shack, for trying to stammer a request for that through your Covid-19 face mask could cause some confusion!

The Righteous label are churning these Lux & Ivy themed compilations out at a similar pace to McDonalds burgers, this one follows on from “Records, Records, Records” that came out in July (LTW Review). I guess the frequency is something to do with many of these tracks no longer being subject to copyright; whatever the reason – to have these buried treasures unearthed is a treat to behold.

We get 42 tracks spread across two CDs, and an 8 page booklet written by compiler Dave Henderson who attempts to bring reason to some of these incredibly obscure and downright weird recordings from genuine no hit wonders to internationally revered artists including both Eddie Cochran and Kenny Rogers.

All the tracks have been remastered from the original sound sources.

The Scouts open up proceedings with ‘Mr Custer Stomp’ a track first issued in 1962 via Rendezvous Records, and more recently reissued in 2013 via Bighorn Records (aka Jazzman Records), remind yourself of the year when you listen to this one – I guess the premise was to produce something that recreated the sound of native Americans, no doubt referred to at the time as “injuns”. A weird mix of surf tinged rock ‘n’ roll with wagon train hollers and ‘ethnic’ chants and bone instrument shakings.

Sticking with the native American vibe we are treated to ‘Tomahawk’ by Tom Brown & The Tom Toms (a lot of Toms!!), a belting instrumental complete with Dick Dale tinged guitar and some truly flaming piano; a decent original of this would set you back at least £40, so is worth the entrance fee alone.

‘Girl Machine’ was the B-side to the third single from Johnny Walsh and was released via Warner Brothers in both the UK and USA in 1961, written by tenor saxophone player Warren Weidler, apparently the answer record to Connie Francis ‘Robot Man’ A light-hearted vocal romp whereby Johnny details his desire to build a ‘Girl Machine’ to “build me a doll, that’s gonna treat me nice” before ominously warning that “if she flirts, I turn her motor off until she’s true true blue” – this warped ode to mechaphilia failed to chart despite utilising the talents of pianist Ernie Freeman and Walsh was shortly dropped. Freeman appears later in the collection alongside Eddie Cochran who offers up the instrumental ‘Fast Jivin’, a fairly obscure track whose creator was never rewarded with a writer’s credit. 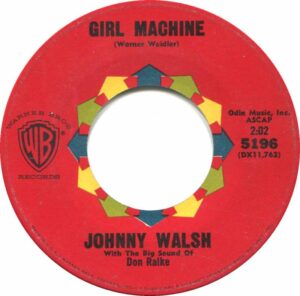 We get two versions of ‘Hot Sake’ (aka ‘Hot Saki’), the first from Ken Nordine & His Kinsmen, who offer up a Farfisa driven kitsch oriental romp, that has clearly taken its inspiration from The Champs ‘Tequila’.

Credit to Conny & The Bellhops, who cruised around the Midwest in a fire engine red hearse. Formed by Edgar M. Conrad III, we are treated to two tracks, ‘Bop Sticks’ and ‘Shot Rod’ which were recorded at Sun Studios and engineered by none other than Scotty Moore, the two tracks being the lead and flip of the band’s debut 7” that appeared in 1960 on the ultra-obscure R2 label based in Kansas City. It’s basic rockabilly, yet insanely infectious. The band were elected to the Rockabilly Hall of Fame in 1977 and the Kansas Music Hall of Fame in 2010.

Be ready with the volume control for ‘Money (That’s What I Want)’ courtesy of Cherry Wainer, a South African-born musician, and a soloist on the Hammond organ. Best-known as a member of Lord Rockingham’s XI. Wainer clearly plugged her Hammond direct into the grid, and the recording engineer hit the red line!

Huey ‘Piano’ Smith was American R&B songwriter and pianist who hailed from New Orleans, Louisiana. ‘We Like Birdland’ was the flip of his 1958 Ace Records ‘Havin’ A Good Time’ single, a piano and vocal honker that was written by Ace Records founder John Vincent Imbragulio who wrote literally hundreds of tracks for the likes of The Fendermen, Pat Boone, and James Last – ‘Birdland’ was also covered by Chubby Checker for his ‘It’s Pony Time’ album.

“He wears a weird beard… like a porcupine” according to Cindy Malone on her 1961 debut, another throw-away teen novelty belter, courtesy of an inhouse orchestra complete with a neat sax motif that garnered the release some recognition in Australia. Malone went on to release some credible Northern Soul 45’s via Capital Records but this one is way more fun.

Dicky Stop offers up the ‘Class Cutters’ section of the title, the track being his only release under that name, he is better known as Richard ‘Dick’ Toops who amassed writing credits for the likes of Dale Hawkins and Johnny Cash who took ‘Delia’s Gone’ into the charts – a track that more recently appeared in the soundtrack to Kill Bill.

The Zanies offered up ‘The Blob / Do You Dig Me Mister Pigmy’ in 1958 via the wonderful Doré (pronounced Dorrie) label, a label that really deserves an overview of its output of insane odd-ball records – The Zanies didn’t let anyone down with this R ‘n ’B monster stomp complete with hilarious monster squelches, screeching brass and Howard Keel in a dungeon vocals advising us to “beware of The Blob”. As a bonus they also contribute “The Mad Scientist” to Disc Two which is well worthy of a mention just for the insane laughter alone.

The Scholars close the disc with a bizarre rock/doo-wop rattler entitled ‘Kan-Gu-Wa’ which occupies the same dubious territory as The Scouts. The Scholars were the high school band that included one Kenny Rogers on rhythm guitar. The Scholars released a handful of singles between 1956-1957 the last being ‘Kan-Gu-Wa’ on the US Imperial label, a copy of that one would cost you at least £50 to get hold of, you wont be surprised to learn that this is a very long way from ‘The Gambler’! 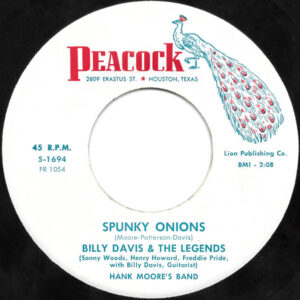 Disc Two delves deeper into the sea of weird and wonderful, opening with the storming “Spunky Onions” from Billy Davis & The Legends; this one should be familiar to anyone with a leaning to these compilations – the track having been included on the Las Vegas Grind compilation series. A mid paced stomper complete with a high-octane sax blast peppered with the “spunky onions boy” retort in an almost facsimile of Mr Magoo voice artist Jim Backus.

Eddie Smith & The Hornets deliver “Upturn” a Link Wray inspired flaming instrumental that was released in the US via REL/Top Rank in 1960 and looks to have been Eddie’s sole release, which on the evidence of this is shameful.

Boots Brown was a fake name used by jazzman Shorty Rogers, born Milton Michael Rajonsky to release rock ‘n’ roll nuggets (he also went under the name ‘The Prince’) including ‘Cerveza’ which snuggles neatly against Dore Alpert’s ‘Fallout Shelter” – in a similar fashion to Rogers, Alpert was a fake name for the rather more well-known Herb Albert. “Fallout Shelter” being an over the top reaction to scorned love complete with “never again will I open the door cos I might get contamination from you” lyrics. And to think he later dropped the Sex Pistols!!

“Hideout” is the standout track of the entire release, credited to John & Judy and released on the Doré label. If you have anything by John & Judy, you will know just how incredibly rare (and valuable) the original pressings are, aside form being a stunning Link Wray sourced surf romp that takes on a pop teen beat vocal holler. John who provides the guitar licks was in fact John Maus aka John Walker founder of The Walker Brothers here duetting with his sister on vocal duties.

George, Johnny & The Pilots offer up their sole release “Flying Blue Angels” the doo-wop romp complete with a cavernous Howard Keel (again) type voice that intones the title of what could have been the theme tune to a 60’s airline based sitcom.

Frances Day aka Gale Warning offers up the bizarre “Met Rock / Heartbreak Hotel” – recanting of the shipping forecast locations accompanied by a diamonds are a girl’s best friend big band stormer, whilst her cover of “Heartbreak Hotel” is brass driven with Ms Warning trying her upmost salacious best.

Had it not been for John & Judy, Janie Grant would have taken the top spot on this release; her “That Greasy Kid Stuff” is pure novelty magic! Opening with a keyboard melody Daniel Miller must have heard as he formulated the Silicon Teens, before the then 17-year-old Janie Grant remonstrates about historical figures using too much hair gel; Nikita Khrushchev gets tagged, surely the only song in the world to link a cold-war politician to hair gel before joyfully declaring “Cleopatra sailing down the Nile with Mark / Was huggin’ and kissin’ was as happy as a lark / But suddenly she ran her fingers through his hair / Stopped and said Well I declare / Are you still using that greasy kid stuff?” The song title later became a tag line for a Vitalis commercial.

Released on the Caprice label in 1962, the track charted in a number of US States riding the then wave of next generation starts who followed up after the death of Richie Valens, and The Big Bopper, Little Richard had become enlightened, whilst Jerry Lee Lewis certainly hadn’t when he married his 13 year old 3rd cousin!

Righteous have again plundered the archives, venturing into the darkest recesses of rock ‘n’ roll, and coming up with some gems; I can’t wait for the next instalment.