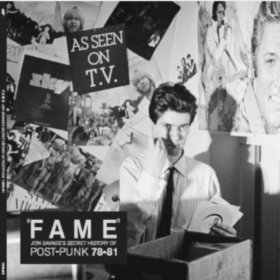 “The art of the good compilation album is one that is finely balanced between selecting the familiar and the obscure. Uncovered recordings that may open up exciting new areas ripe for contemplation. When Caroline True Records (CTR) embarked in 2006 in selecting the tracks for the definitive Post-Punk comp album with Jon Savage curating, things were certainly never going to be neither humdrum nor boredom inducing”Â¦..”Â says the Press Release.

I reviewed a pre-release cd-r of this compilation four years ago, (its taken six to get the collection finalised) – From the label that brought us Prefects and Manicured Noise reissues comes a personal selection from the scholarly Mr Savage. The theme could well be the “No more rock’n’roll for you”Â refrain from Orange Juice’s Poor Old Soul, as we get early electronica (Human League, Cabaret Voltaire) no wave (Mars, DNA) the sound of young Scotland (Josef K, Orange Juice) proto-industrial (This Heat) and 16 other strange and wonderful artists who owed nothing to Chuck Berry and rock and/or roll.

Prefects, Wire, Joy Division and Pere Ubu are at the cerebral core; Kleenex provide light relief with their joyfully unique Swiss-femme-nadsat; Cowboys International contribute a Blitz club synth-pop gem; Nigel Simpkins is a 1978 bedroom version of Fat Boy Slim. Elsewhere, Noh Mercy pre-empt riot grrrl and use the expression “politically correct”Â for the first time in song, and the Flying Lizards track will be a revelation if you only know them from their Money novelty hit.

These are only the most seriously new-sounding, intense and uncompromising sounds from the era and no mere exercise in pure nostalgia. As well as being the hippest, most obscure of mix-tapes it also throws down a gauntlet to today’s post-everything bands.

An accompanying interview conducted at the time was never published. Here it is.

JS: The title came from John Kertland (Caroline True Records MD) It was a 1979 fanzine produced in Telford which was spiky and bolshy in the spirit of the time and the time’s music ”â€œ e.g. the Prefects and many of the tracks on the comp.

No PIL? Magazine? Subway Sect? Licensing complexities I imagine but which of the conspicuously absent would you have liked to included?

JS: I would like to have produced a double CD but as you know, things are hard to license (money, finding the rights holders and then getting some/any sense out of them). It’s a long and tedious job and John has my thanks. Sometimes the choices just run out. I’d have loved to include a track by Chrome, from “Alien Soundtracks”Â, or something by PiL. Oh, and Rema Rema, who fell by the wayside. And I still love Subway Sect, but they’ve been well comped.

Given that categorisation is (arguably) a necessary evil – Where do you draw the line between what is punk and what is post-punk?

JS: Well punk stripped everything down to the basics and then became a Ramonic straitjacket so Post Punk opened everything out again. So it was a period of great discovery.

What a joy to hear Noh Mercy and Nigel Simpkins again ”â€œ any particular tracks you are extra-delighted to have unearthed?

JS: The Screamers, a great lost group. And I love the sheer brutal rhythmic drive of Mars’ 3E and the Method Actors’ The Method.

Was there really any need to include a Joy Division track, and why choose Autosuggestion?

JS: Well these were the tracks I actually liked at the time and the compilation, as they often do, came out of a couple of post punk CD-Rs that I made for my own and my friends’ amusement. Joy Division were a very big part of that time and Autosuggestion was a very important record for me. I liked the fact it was 6 minutes and so claustrophobic: it racked alongside PiL’s Home Is Where The Heart Is and impLOG’s Holland Tunnel Drive. Then you have the very short tracks: Noh Mercy, the Middle Class Out Of Vogue EP, the Urinals Sex ”â€œ all about a minute or so. Anything went.

Is ‘England’s Dreaming’ on the National Curriculum yet?

JS: No. But thanks for asking. It’s very strange what an issue punk has become. But I did think it might become so at the time.

The full track-listing now includes tracks by Rema-Rema, Chrome and Subway Sect I believe ”â€œ but the full track-listing still hasn’t been released. Only way to find out; buy a copy of what I have no doubt is an essential, if not the near-definitive collection of its kind.