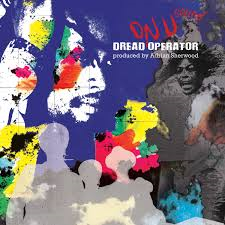 Dread Operator From The On U Sound Archives

Four CD boxset of releases from the early 80s on the legendary On-U Sound Dub Reggae label, featuring Singers and Players, the New Age Steppers, Creation Rebel and a whole host of others….Ian Canty ponders on the beginnings of the UK’s Post-Punky Reggae Party….

The prolific and prodigious output of the Adrian Sherwood from the late 70s right up to the dawning of Acid House to me presents the clearest stating of aims, ideals and sounds of the crossover between Punk and Reggae. With big Reggae fans on the early Punk scene such as John Lydon and Joe Strummer and the Rebel stance of Roots musicians it was always to be the case that osmosis would occur eventually. Adrian Sherwood was right in the midst of it. He started out with his productions during 1978 and as time went on he mixed up musicians from both of those separate fields to great effect, producing a vast catalogue of music all engineered with his idiosyncratic stamp. Although fame would beckon as he came to remix many big names over the years this would be his crowning achievement…and On-U Sound was what he called it…

Singers and Players, whose 1984 album “Leaps And Bounds” is the first disc in this new collection, were as you might suspect from the name more vocally led and song based than the other outfits on display (I reviewed their “Revenge Of The Underdog” album here). The “band” line up is mind-boggling to start with: vocalists include the (at the time) recently deceased Prince Far I, Bim Sherman, Mikey Dread and Congo Roy and the backing band draws from the ranks of “the Skatalites of the 80s”, the Roots Radics Band. With such august participants it is hardly that much of a surprise that the record is an ace, full of joy and uplifting majesty. The singing is quite beautiful on Ashanti Roy’s “Moses” and “Make A Joyful Noise” (and they did!), quite high and pure, not unlike Junior Murvin circa “Police And Thieves”. “Breaking Down The Pressure” is almost like a “Heavy”, updated version of Rocksteady – it is lovely and also impossible not to at least tap a toe to.

Prince Far I’s substantially gruffer, mighty sounding “Alla la – Dreadlocks Solider” and Mikey Dread’s Proto-Dancehall “Autobiography (Dread Operator)” provide a nice contrast to the preceding sweet sounds with a jazzy sax and percussive electronic bashes on “Dog Park” complimenting the rambling but entrancing story told by Far I here. The emergent sound of Dancehall figures too and it is easy to imagine “Vegetable Matter” rocking the dances and lawns, Sherwood’s sharp ear for changing styles and innovation ensuring it doesn’t sound at all dated like some of the same vintage. As if to fox Sherwood and On-U Sound’s rep as the creative force of crashing, experimental Dub the final track, Bim Sherman’s “Striving” could have been a massive hit single, infectious Pop Reggae that the likes of UB40 could only dream of.

The next item on the agenda here is something completely different. On-U Sound’s mainstays Creation Rebel’s 1981 collaboration with the New Age Steppers “Threat To Creation” is classic minimal Post Punk Dub, with Pop Group drummer Bruce Smith and PIL wizard Keith Levine contributing ghostly cameos, among thunderous echo washes and speaker-demolishing bass. It is the sound of the Post Punk Reggae connection broken down to its constituent parts, then switched around to present something fresh and new. To that end, “Eugenic Device” is timeless, beautiful, seemingly barely moving but always going forward. “Earthwire Line” is remarkable, an off-key spy theme buried under Dub effects and an out of tune drum….might sound odd but works marvellously. The strident bass and shuffle drums of “Final Frontier” takes us to the end, not far from the thud of Public Image’s “Careering” but more out of the cosmos and beyond the outer limits far into the distance. “Threat To Creation” takes you on a journey to the heavens – don’t blame me if you don’t want to come back.

Both Creation Rebel albums featured here were licenced to Cherry Red (the perilous financial state most independent labels had to live with during the early 80s virtually insisted on the “licencing out” approach at times), but definitely typify Sherwood’s sonic vision. The second Creation Rebel LP here, 1982’s “Lows And Highs”, is much more traditional sounding than the previous record, more straightforward Reggae with hints of Dub rather than the other way around. In the On-U Sound tradition Dave Wright of the Pop Group and Essential Logic pops up alongside CR kingpins and Reggae dab hands Crucial Tony and Keith “Lizard” Logan on this waxing. It kicks off with the conscious skank of “Independent Man” and its second Dub part. The brass-led, creeping rhythm of “Rebel Party” isn’t a million miles away from the Skinhead Reggae of a decade before, but we’re cooled down with the gentle skank of “A Reasoning”. Though still toting state of the art Dub effects, this LP is the most “pop” in the box. But that’s not a bad thing as there are some great tunes on here and all is delightfully played and sung too.

The kind of sweet, commercial Reggae of “Lows And Highs” is hinted at elsewhere on this boxset but here it is in full bloom – “Love I Can Feel” has the kind of loping, lazy Summer feel that defined the feeling around the Notting Hill Carnival of the time, the “Dread Broadcasting Corporation” and underground modern UK Reggae of the time. “Rubber Skirt (Parts 1/2/3)” has some thrilling moments that allude to their older style, on the whole it’s a very laidback collection in direct contrast to their previous effort, but a beautiful recording full of hope and delight.

Finally we arrive at the various artists compilation “Wild Paarty Sounds Volume One” which is the genuine googly of the set. This emerged in 1981 and numbered among its tracks are contributions from the Mothmen (who went on to become the rump of Simply Red), Judy Nylon (most well-known as a member of NY Punk duo Snatch with Patti Palladin), some fledgling On-U bands in their own right like London Underground and Creation Rebel, plus some ad hoc studio aggregations, who may well have been there to bump up the numbers but they perform admirably. The sounds on offer here are decidedly “out there”, but chime in with the discourse of the Post Punk scene of the time completely whilst retaining a separate identity of their own.

The thudding, claustrophobic Dub Reggae of Jah Woosh’s “Woodpecker Sound” in this company seems relatively mainstream, good record that it is with some mighty sonic blasts. On “Bed Bound Saga” by Machine Gun Hogg & Co the Punk Funk guitar sound that was all the rage at the time gets deconstructed and put back together with sticky tape (Sherwood was very influenced by the “cut-up” methods of the Beats, via Mark Stewart), then the huge voice of Prince Far I dominates “Quante Jublia”. Chicken Granny (which I am going to guess is Sherwood and friends under yet another pseudonym) then chip in with the fast-paced “Quit This Body” being the perfect meeting point of Public Image Limited, the Pop Group and free Jazz.

Scalds of grimy but sharp-edged guitar punctuate the enthralling “Dreams Are Better” by London Underground, one of the earliest bands to align themselves to Sherwood’s muse, their output needs to be made more widely available. Alan Pillay (better known as an actor/actress in “The Comic Strip” films and TV programmes) donates two extraordinary pieces here that make one wish an LP was recorded by him/her at this point in time: “Demonic Forces” switches between low-key foreboding to a beautifully lilting torch song and “Parasitic Machine” is all whispered voice, bongo drums and effects. They’re just brilliant and capture the experimental feeling of the times and the label perfectly. If Jeb Loy and the Oil Wells “Things That Made U.S.” is a bit of a laboured joke it is more than made up for by the sparse New Age Steppers “Yipee I Aah”, Judy Nylon’s racing “The Dice” and the rest on “Wild Paarty”. Quite possibly the perfect record for when you are entertaining as hosts, or indeed ghosts.

So there you have it, a wondrous and thrilling variety of sound. Most of these records have been unavailable for some time so it is nice to see them re-emerge into the spotlight again as they were part of a very special feeling when open minds united to broaden everyone’s horizons. Also it is great they have been brought together as a salute to Adrian Sherwood and the artists that made On-U Sound one of the most consistently entertaining and very best recording imprints of the late 40 years. Let’s hope for more! Handsomely housed in a clamshell box and mini-repro sleeves with an informative booklet, “Dread Operator From The On-U Sounds Archives” is both a document of turbulent but exciting times and still damn fine listening today.