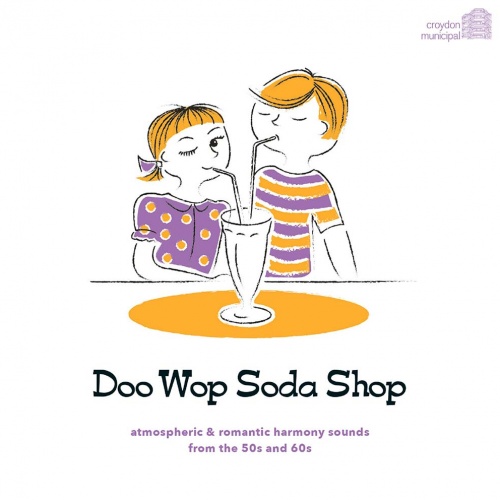 Doo Wop today occupies a pretty dowdy position, but people forget without it you wouldn’t even have Rock ‘N’ Roll in the first place. Along with the Blues it was what early Rock was built on. You could even say that Doo Wop was as Punk as you can get (as if proving everything is “Punk” to make it seem any good in the first place was ever valid in any way, but I digress…..), well DIY at least, because all you needed was a few friends that could carry a tune, nothing else. Even Skiffle was pretty Prog Rock in comparison. It was “street-level” too as most of these groups actually came together on street corners to sing and were part of early youth culture in their look and “gang” mentality.

As the sleeve-notes infer, we may have been sold a bit of a pup with the image of hearing this music on a beautiful USA day being played on the shop jukebox, whilst you sipped a soda with that special girl/boy, elegantly kitted out with a flat-top and bobby socks etc, the honey-dripping singer putting into words exactly what you wanted to say to each other. That sort of Americana 50s Dream probably only came into existence around 1972 with the advent of the stage show of Grease, films like “American Graffiti” and “The Lords Of Flatbush” and a bit later the TV programme “Happy Days”. So yes it probably never happened like that despite what the Fonz may have led you to believe, but what is sure is that all over the word people bought into the concept and in the 50s these records sound-tracked sceanrios that weren’t that far away from the basic idea (the eternal boy meet girl will they/won’t they conundrum) if maybe not quite as perfect as the idealised version. Just wannabe Greasers and their girls, listening to tales of star crossed lovers like themselves, sang by voices like angels.

All of which is a roundabout way of saying here are some lovely sounds to hear on “Doo Wop Soda Shop” and you shouldn’t be put off by whatever you have heard about this type of music in the past. Croydon Municipal have done their usual job of presenting things in an elegant, tasteful manner and the sleeve catches the mood perfectly. Not all of the people featured on here are total unknowns (Frankie Valle rejigged his name, gained the Four Seasons and never looked back), but you won’t have heard many of the songs – what they all have in common is that they are well worth the exhumation granted here and all give you that tingle of excitement that only innocent Rock ‘n’ Roll can provide.

“No More” by Litle Victor and the Vistas is a casebook example of the art of Doo Wop, all high vocals, bass, harmony with a piano led backing. Pristine. The mournful sax on the Dukes moody “Looking For You” bleeds sorrow and you can just picture the Heartbroken Kid trudging sadly home in the rain to the tune of the Companions “It’s Too Late”. The Varnells’ toy-town chimes lead on the devotional “All Because” and the Velvatones “Impossible” has Gospel touches which hark right back to the genre’s original roots. Pride of place for me here is the Reminiscents beautiful “Flames”, an eerie but touching ode to doomed love.

But the main thing with “Doo Wop Soda Shop” is that the track listing has been prepared in a fine fashion by the bods at Croydon Municipal as to totally capture the feel of those odd pre-Beatles Pop Music years, at least as we imagine it. Everything feels right and rings true, which produces an atmosphere that is intoxicating. A totally entrancing, lovely presentation from one of the best imprints in the reissue scene. No-one makes music like this today, the carefree, innocent beauty on display here is all we have left of an extinct breed. A museum piece perhaps, but one to cherish and enrich our existence today.