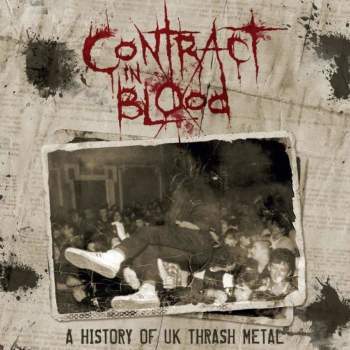 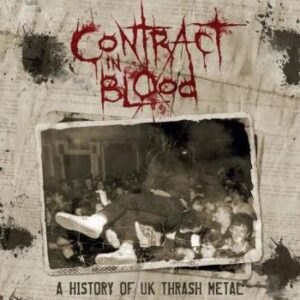 Subtitled “A History Of UK Thrash Metal” this set has 83 tracks co-curated by Richard Anderson and Ian Glasper and its release coincides with the latter’s book of the same name…..Ian Canty finds himself way out of his comfort zone, but somehow enjoying his magical supersonic mystery tour…..

I’ll lay my cards on the table right at the start here – I had no real knowledge of the vast majority of the bands featured in Contract In Blood, I was only really vaguely familiar with some of the names. This was very much a voyage of discovery for me – I must admit that I am more or less in the hands of the compilers here as to whether this is a true representation of British Thrash Metal’s lineage. Having read a couple of the books Ian Glasper did on various Punk scenes which were pretty good, he and his oppo have my trust.

From what I can work out from the introductory and detailed sleeve-notes here, UK Thrash Metal started on the back of the NWOBHM boom in the late 70s. As for forerunners, one would have to conclude the visionary work of Motorhead has to be the real starting point. By tapping into the fast fury of the MC5 and the rush of 1977 Punk, Motorhead played a major part in modernised Metal, all the while insisting they just played Rock & Roll, which made them accessible to all across the board. The New Wave Of British Heavy Metal in part took up the baton from Lemmy, Philthy and Fast Eddie, but by 1981 most of those bands had either been signed to major labels and had their rough edges smoothed out or split. The fans wanted something faster, something fresh and new, whilst keeping their fondness for soloing and musical chops.

The early 80s are when things really started to mutate and develop and what became very much an underground, grass-roots phenomenon emerged. In the United States Hardcore Punk bands married smart musicianship to superfast songs and in the UK the similarly gung-ho Discharge and GBH found followers on the Metal scene for their brutal power. The result of this cross-pollination was Thrash Metal, which harnessed tight playing, Metal guitar solos and singing styles to fast Punk tempos (though the Punk “barking” style vocals would also gain traction, making it tough to distinguish exactly what was being heard, whether it was HC Punk or Thrash Metal). Lyrical preoccupations ranged wildly, from gore-splattered horror film imagery, lampoons and parody, death and destruction and occasionally social comment and politics. This compilation splits the discs into bands from separate geographical areas, making it a challenge for your humble, horrible scribe to work out if there are any marked regional variations.

First we journey to the North East. Venom kick things off with a bundle of pure energy entitled Sons Of Satan, yes they were really more Death Metal’s ground zero, but this is a speedy crackerjack of a tune. No-one told me they were such fun! Warfare, featuring a drummer called Evo who played with Major Accident and the Upstarts and the bass player of Oi! band Dogsbody, underline the Thrash links to Punk on Hungry Dogs and Re-Animator do a fairly straight, good version of the Dead Kennedys’ top 40 hit Too Drunk To Fuck as well.

The only thing I found a little different on this disc than some of the others is more of a propensity towards multi-section pieces with Vindicator’s Black Mass and Holosadie’s Pyscho being the best examples – kind of like a supercharged Prog in places, which I suppose bearing in mind the roots of Heavy Metal are entwined with that era, is not so surprising. It would be remiss of me not to mention Newcastle’s own Hellbastard for 1. having the most Thrash Metal name ever and 2. being generally great.

Next stop for us on the second disc presented here is the North West And The Midlands (which some would say was the birthplace of Metal). These offerings are generally shorter and explosive. Solitary from Preston impress with vicious Punky energy on Unidentified and Blood Money’s Metalysed manages to perfectly fuse old style Metal values to a vigorous pace. Sacrilege are one of the most interesting bands here for me, starting out as more or less an Anarcho Punk act, but steadily moving more metal-wards. Their Sight Of The Wise is beguiling and I would like to hear more from them, some great female vocals also marking them out as different. Arbitrater also had Punk roots (Rat of the Varukers on vocals) and their song Judge And Jury fittingly skates between Metal and Punk, backed by some fearsome drumming.

If Zeitgeist are a little more traditional, the twists and turns they employ on Dollar Disciple are highly novel and pleasing. Metal Messiah come on like a souped-up Iron Maiden on Mad Dogs Of War and the galloping bass and vocals of Let’s Go Apeshit by Hospital Of Death are musically entertaining and the lyrics typify the more comic side of Thrash.

Moving onto Disc 3, we’re now in the East and South. This section embarks with the English Dogs, another Punk band who embraced Metal as time went on and their crushing The Beast Will Arise is evidence of their pivotal position on the two scenes. Kermakil (see what they did there?) employ hoarse vocals and pummelling rhythms but also manage to instil a bit of melody to The Leaving and a low-fi recording of Burning Blood by Therion doesn’t mask the power of this short-lived but intriguing outfit. Decimator give us a shot of fast Old School Metal on Dirty, Hot And Hungry and Southampton’s Desolator close things out and include a few Prog-ish moves on Full Power, but have a really smart and tough attack about them.

Disc 4 includes probably one of the best known and most successful of UK Thrash Metal bands in Onslaught, who provide Let There Be Death with vicious riffing and a Sword and Sorcery-type lyrical approach. We get a brisk battering from Wretched Soul on War Wolf, but feel the better for it and London’s Kremated give us a masterclass in growly Speed metal on the apocalyptic Three Minute Warning. I was impressed by Winter Of Torment’s Colour, which uses acoustic guitars and gruff vocals added to a winning stop-start chant and Suicide Watch’s Eyes Of The Dead is a fire-cracking demonstration of superfast attitude. Taliesin show that Thrash Metal wasn’t about ignoring real life too with their short and sweet Poll Tax Fuck That.

Finally we arrive at Disc 5, which crams together Wales, Northern Ireland and Scotland. Thrashist Regime (Yes! Really!) take the mickey and come up with a darn good tune on their memorable Headshot, with Gama Bomb from Newry going back to Metal’s core values well on New Eliminators Of Atlantis B.C.. Richard III take the Punk laurels on this disc with a demo of Feel No Pain and Evil Preist, who were Therapy! bass player Michael McKeegan and family, build up from a slow start to vary things nicely on Soulsucker. Fittingly North Berwick’s oddly named Daniel Wax Off bludgeon us one more time as a send off, with a furious Fry Or Be Fried.

This was quite a trip for yours truly. I suppose the mark of a good various artists compilation is if you can come to it like I did virtually “blind” and leave wanting to find out more about the bands featured. The UK Thrash Metal scene was a mystery to me a week or so back and thanks to Contract In Blood I understand it a lot more and appreciate its strengths. I’ve learnt something and enjoyed far more of this boxset than I at first expected to. I can’t say I became a convert and a few selections did pass me by without making much of an impression, but there is plenty to interest the casual observer and a lot rare stuff for a Metal fan to get their teeth into. As to whether this was a true survey of the UK Thrash scene, I will leave it to others to decide – I found it an education, but more fun than that sounds. There is the book to accompany this too (which you can get more info about here), but there’s plenty of life, sound and fury here to be going on with.