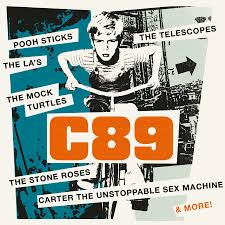 New compilation in the series seeking to follow on from the classic NME C86 collection, this time surveying the UK Indie Pop of around 1989 vintage….Ian Canty finds out how the janglers fared in the face of Acid House….

Although this series is inextricably linked to the NME C86 cassette which documented the fervid activity of guitar-orientated Independent music in that year, detractors have noted that there was no such thing as the follow-ups at the time i.e. C87, C88 and now C89. That’s as maybe, but we should not lose sight of the quality of music on offer. Also, why shouldn’t there be a compilation that details the music of any scene in any year? The C8- whatever title gives the potential listener a reasonable idea of what will be on offer, so it is as good as any. We’re all long way off in time anyway, so this set is a welcome reminder for some and fresh for others. As we’re dealing mostly with bands and tracks that haven’t been “comped to death” (possible exceptions being the Las and the Stone Roses on here), it seems logical enough to me.

In 1989, though, things had changed markedly since three years previously. The summer of 1986 may have been when Indie Pop stood on the threshold of going overground, but one way or another it did not quite work out that way. The bands that did get signed in the major label free-for-all that followed struggled to make an impact, and many others that stayed independent split up. Some of the labels that pioneered that ’86 wave had faltered too. Acid House (along with its Indie Pop doppelganger Baggy) was just starting to make an impact, with accompanying lurid tabloid headlines and akin to the Punk explosion, this of course making young folk all the more attracted to it.

However the die-hards and those enthused by what they heard three years before took the place of the fallen bands and imprints. Although operating at a more obscure level, the Independent scene in the UK was still vibrant enough to produce some new sensations and killer tunes. These bands were not yet totally ignored by the music media, who along with their then-current preoccupations, also had to fill a lot of other pages each week.

C89 initially focusses on those new arrivals. We begin with the flipside of the Las massive “hit-to-be” There She Goes, but Come In Come Out is totally different in style, nice exotic percussion and a slight Funk feel. The Family Cat, domiciled in Stoke Newington but with roots in the South and West Country, got praise from Thurston Moore for their great, spiky Tom Verlaine single and a few years on would record their masterpiece, the brilliant Steamroller. The Telescopes take the JAMC sound and add an extra coating of grime on their nihilistic distorted wonder Nothing.

Featuring ex-members of the Inspiral Carpets and the Bodines, the Rainkings’ Break The Strain has a similar guitar rush to the Wedding Present, and the cumbersomely-named New Fast Automatic Daffodils deliver some Post-Punk Funk goodness on Lions. Of the lesser known acts, Southampton’s Jane Pow dig deep into 60s R&B fuzz on That’s My Girl and there is a delightful Young Marble Giants feel to Red Chair Fadeaway’s Let It Happen. Another Friendly Face by How Many Beans Make Five has a New Wave sound that befits their wacky name and Po! imbue a plaintive beauty similar to early Dolly Mixtures on their tuneful Confidence. It is left for Carter The Unstoppable Sex Machine’s anthemic Sherriff Fatman to finish things off on a selection full of vigour.

The next disc kicks off with the Stones Roses, poised just on the precipice of fame with Going Down. It has just a hint of the shuffling drums that would endear them to the dance crowd, but otherwise is wide open Indie Pop. If the Pooh Sticks I Know Someone Who Knows Someone Who Knows Alan McGhee Quite Well apes the scene like The Kamikaze Sex Pilots’ Sharon Signs To Cherry Red half a decade before, it does so accurately with fey vocal delivery and jangle that could have come direct from a Pastels record. There is plenty of that kind of stuff on this part C89, with A Million Miles by Brian and Another Sunny Day’s vicious You Should All Be Murdered being very in that mode, but there are also all manner of waifs and strays widening the scope.

Luton’s very own Thrilled Skinny were a fine outfit, taking their cues from the Swell Maps’ buzzsaw Punk experimentalism, and Biscuits In A Tin is a marvellous effort that could have came straight off a 1979 Rough Trade record. King Of The Slums were a different thing entirely, with an insistent violin and gritty romantic glamour making their frantic Bombs Away On Harpurhey some ride. Though The Revolving Paint Dream had been active for some time, Green Sea Blue has Chritine Wanless’ clear voice and a stomping Motown rhythm that add layers to Andrew Innes’ already impressive, um, creation (sorry!). None of these has that conventional “Indie” sound and they are all the better for it.

There something of a Who 66 feel to the Orchids’ What Will We Do Next and the Driscolls really made me want to check out more of their stuff on listening to Doctor Good And His Incredible Life Saving Soup. This sparky Mod Pop/Psych beaut seems to cop a smidgeon of the intro of Millions Like Us, but they stamp their own mark indelibly on it in fine style. The Snapdragons must have been confused with the Soup Dragons a bit because of the name, but there’s no mistaking their music, or irreverent attitude of Dole Boys On Futons. Barbel from Liverpool were another revelation to me, they zero-in on the kind of 60s Garage blankness of ? And The Mysterians, but in this context sound like a tougher Inspiral Carpets. If The Wilderness Children, from Dundee, hark back to the Shop Assistants, they do so with a natural élan and the Popguns use a meaty rhythm guitar and strident drums to power them away from the more featherweight janglers.

Arriving at the final disc, the Claim once again show that Mod was busy cross-pollinating with Indie Pop and often to wonderful effect, like on their biting Picking Up All The Little Pieces. From the Isle Of Sheppey, Newsflash were also stylistically in the same general direction. Despite the Marvin Gaye/The Clash comparison in the sleevenote pen-picture, they offer a semi-acoustic punchy Indie sound replete with nice harmony vocals on Wherever I Go.

Many of the bands here made just a fleeting impression, gone in a couple of years, striving in a desperate attempt to leave some sort of mark behind before it all fell to pieces. The Davincis are a case in point, but Thomas Wolfe by then had all the ingredients to go much further, a powerful mid-60s influenced sound, a good tune and literate lyrics make it completely satisfying to listen to. The wonderfully
named Peruvian Hipsters take the rise out of Spandau Ballet’s foghorn-voiced vocalist in Tony Hadley, which even manages to squeeze in a near-Metal guitar break, and the Church Grims charm with the ebullient Pop of Mr Watt Said.

For me, this part of the collection was much more a trip into the unknown, and apart from the Claim I don’t think I knew much about any of the acts on this one. “Newcastle’s answer to the Stone Roses” Sunflowers actually weren’t that much like their rivals at all, sounding decidedly more Punk Rock on their ultra-catchy Bubble Bus. Strawberry Story also have a nice rough Punk edge on their fuzzy and tuneful winner Tell Me Now, definitely a band I would have liked to have seen (perhaps I will – they apparently reformed in the 21st century).

Robert Smith (no, not that one) co-fronted Christine’s Cat with the eponymous Ms Grant and their male/female vocal duet works perfectly alongside a clattering Electro Punk attack on their tune Your Love Is…. The market town of Salisbury furnishes us with the marvellous Jane From Occupied Europe, who as you might suspected given their name (derived from the second Swell Maps LP) look back to the original 70s upswing of DIY, but make sure they add a cracking melody, upfront vocals and a golden guitar line to their song Annabel Lee.

All of this means C89 is fine stroll through one of Pop’s more neglected avenues. There may have been an “after the goldrush” feeling generally at the time, but that didn’t stop the hardy souls who had a very definite way they wanted to play and present their music and were happy to do so far away from mainstream concerns. There are a few tracks of course of “standard Indie Pop” that went in one ear and swiftly out the other without making much impression, but for the large part everything is entertaining enough and there are many gems that were new to me, even though I sort of had my ear to the ground around that time. The set is beautifully presented too, with a great sleeve design and booklet. A treat of a selection box made by dreamers who just wanted the summer to go on forever and with this compilation, I think it just might…