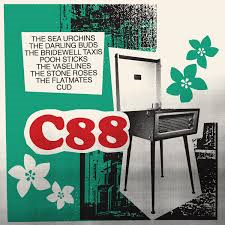 Follow up to the successful C86 and C87 collections, we move on another year in UK Indie-land to 1988, when the first signs of “Baggy” were beginning to make their mark…..Ian Canty remembers the final days of a truly Independent scene……………

Like it or not things were changing and C86 plus the furore around it was starting to seem a long time gone by the middle of 1987 (when this box set’s brief begins). This new compilation, pitched that vital couple of years on, couldn’t have made it clearer – the second track is by the Stone Roses. Perhaps they did sound like an Indie band then with plenty of Byrds influence (their Punk-ish roots earlier on in the decade forgotten for now), but they were a sign of things to come. Labels like Ron Johnson and Subway were slowly winding down and the music press had long been in search of a new toy to play with. Before much time would pass any number of previously jangly bands would be stating profusely that “there was always a dance element” to their music whilst chasing the latest bandwagon to hop aboard.

But just before all that there were new and weird acts cropping up all the time, a continuous conveyor belt of creativity with different ideas and different sounds, the prevailing mode of Jangle being stretched out to new and sometimes surprising areas. Proto-Baggy bands like the Bridewell Taxis played alongside more traditional Indie types like the Snapdragons and the Moss Poles. Oldham’s Inspiral Carpets would get swept away on the incoming Madchester wave, but never really let up on their organ driven 60s Punk mania. The Pale Saints represented the new wave of 4AD shoegazers, with Thrilled Skinny going right back to Independent Music’s roots with their scratchy, lo-fi Swell Maps influenced Post Punk Pop. Creation Records bided their time for the moment with the House Of Love being their then tip for top, though they would have to move on to London Records to take the step onto Top Of The Pops and the mainstream (for a fleeting moment).

C88 seeks to document these changes whilst presenting a lucid picture of Independent Pop in the UK during the year. I suppose if you were there you didn’t appreciate it (I certainly didn’t), but there was much variety and choice on offer. In a way things had broadened out and improved since C86, though I have to say two of my favourite bands of the era split around this time, Bogshed and Big Flame (though Alan Brown’s follow up to Big Flame, The Great Leap Forward, are featured on disc 3 with a cracking piece of Agit-Funk Pop entitled Who Works The Weather). I think the loss of those two may have had the effect on pushing me away from the scene for a bit, as a consequence there is a lot that is new to me on C88.

While several outfits here stood on the cusp of success (the aforementioned Roses and Carpets, but also the Darling Buds, whose Shame On You shows the band mere weeks away from hitting the charts and the Shamen, yet to morph into the Ebeneezer Goode era dance act), for many just getting a record out was the important thing, much like Punk in 1977. Just a way of saying we’re here and this is what we do, like graffiti in musical form, a brief statement to celebrate existence.

The Pooh Sticks furnish us with an apt start to proceedings with their scene-parodying On Tape, very much the “Part Time Punks” of the jangle scene, referencing usual suspects Josef K, the Pastels and Mighty Mighty with an acidic dry wit. While the Bridewell Taxis represent the coming of the Baggy, their offering here Lies has a beautiful plaintive trumpet, an evocative spacey groove with the merest hint of a shuffle beat. The Mock Turtles, including Steve Coogan’s brother Martin, would also have a hit in the shadow of Madchester, are shown during the days when they were more heavily involved in organising and contributing to tribute albums (long before that idea had been run into the ground, they featured on the Syd Barrett one Beyond The Wildwood) and at this time they were more tuneful 60s Psych than anything else.

Many bands of the time looked to broaden out their sound by embellishment with brass, following in the footsteps of C86 pioneers the June Brides. Manchester’s The Man For Delmonte for one leavened their standard Indie Pop to good effect with horns on (Will Nobody Save) Louise, as did Belshill’s Groovy Little Numbers on the sublime Happy Like Yesterday.

Though the prevailing ethos was still bathed in the hues of the Byrds, Buzzcocks and Velvets, there was still room for noiser, less melodically inclined bands. King Of The Slums, with a violin that sounded like an angry gang of wasps and their tales of murky Northern activity, excel on The Pennine Splitter their track here. Thrilled Skinny, as mentioned above, were more occupied with producing a bracing Punk noise than jangle and are represented by the headlong, joyous rush of So Happy To Be Alive. Edinburgh’s Rote Kapelle were far more driving Post Punk than jangle, as their contribution to the previous C87 comp These Animals Are Dangerous proved. They score again here with the spiky, driving Fire Escape. The Bubblegum Splash hailed from Salisbury and their track 18.10 To Yeovil Junction is a real treat of fuzzy JAMC thrust behind a simple but addictive melody. This seems to be their only recording, which was originally issued on Subway’s Surfin’ In The Subway sampler LP.

More in the standard indie pop mode the Flatmates seem to have added an air of cool maturity on Heaven Knows, though the more obscure bands also were making the most of their brief moments in the sun. The Bachelor Pad’s Do It For Fun is brilliant, with a mickey-taking Damned intro leading us into a frenetic cloud of pure mayhem. If you were about at the time, half the fun of comps like this is hearing things that passed you by at the time and also acts as a welcome reminder of great tracks you may have forgotten over the years. But don’t fear if you weren’t and all this is new to you – one of the good things about the cheap and cheerful way most of these tracks were put down on tape was they couldn’t afford the gimmicks that make a lot of major label recordings of the same era sound so dated. Hence even when the production job is not the best, it still doesn’t neuter the power or the songs and leaves the majority of C88 sounding crisp and vibrant.

The Fizzbombs live up to their name with sweet female vocals layered over a fuzz Garage Punk instrumental backing that sounds as though it was recorded during a sandstorm, but is utterly brilliant in every way. Things were getting a bit more cynical and arch, a process that would ultimately come to fruition with Pulp’s success a full decade later – witness the Would-Be-Goods The Camera Loves Me, the flute on this harking back to 60s and 70s TV themes so in vogue now with the Hauntology caper. Curry Crazy by Bad Dream Fancy Dress also has a sly knowingness about it, though on the face of it this is cool Punk bluster in the Jilted John mode. The Wishing Stones evoke the chiming guitars of Television on The Old Road Out Of Town with Yeah Jazz’s Morning O’Grady being a stylish Kinks/Hollies Music Hall romp and a real highlight to boot. The Raw Herbs Don’t Bury Me Yet is a great song even though the banjo might make you feel the Anthill Mob are approaching!

C88 finishes fittingly, showing the changing times with the Claim’s Mod take on Indie Pop and Rodney Allen – his one man and a guitar (thought there’s a lot of piano and brass on this song) efforts on Subway had more than a hint of early Billy Bragg and Glastonbury is a typical bittersweet tale of an eventful visit to the (then) Hippy festival.

Though to outside observers this period may have seemed like the death throes of the scene, about to be hit by the one-two knockout punch of the Cartel collapse and Madchester/Baggy/Rave, C88 sounds remarkably fresh and full of vigour. It tells a different story, even if ultimately most of these bands would be mowed down by the media obsession with Dance Music over the next few years. One of a thriving multi-layered milieu that has proved so strangely resilient it still gains new converts even today. C88 will be a boon to these folk and anyone who values a good tune and an original way of dealing with it.

Finally this collection works as a riposte to the “received wisdom” 80s that we’re still bombarded with via the local radio network for instance that lives off the chart hits and nostalgia of leg-warmers, Rubik’s Cubes and Now compilations. Here is a different view. A tantalising glimpse into a hidden 80s full of sometimes fragile endeavour, DIY enthusiasm and total commitment to producing a damn good tune whatever the financial constraint. C88 is a real treasure trove of obscure, truly Independent, Pop goodness and a deft compendium of emotional activity away from the glare of the UK Top Forty.