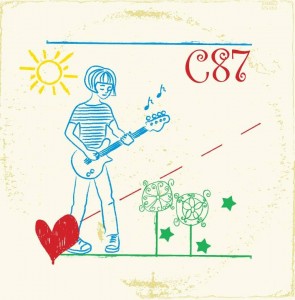 Cherry Red presents a 3 CD box set which answers the question “what would a quick follow-up to the NME’s “C86” have been like? Ian Canty looks back at the bands included on this belated sequel and also to perhaps UK Independent Music’s last Golden Era….

As someone who was there, I can tell you that the mid-80s were pretty much the worst time I can remember for popular music and a bit of a sad era all round. Though Live Aid was a great cause, just look at the bands on the bill, the same ones dominated the charts too. So “Middle Of The Road” they might as well have had cats’ eyes running down their torsos. All the excitement of Punk and Post Punk had either been squeezed out by the money men or became curdled and anodyne as “New Pop” died a slow, slippery death at the hand of the “no socks, no soul” garbage that prevailed. I felt my original enthusiasm for music dampening as the bands I used to like either disintegrated or let people take horrible liberties with them in the name of 80s production techniques and nothing that interesting seemed to be ready to step into the void left by their demise.

There was the odd decent thing coming out on the smaller labels, but on the whole there was no direction, no substance, certainly no feeling of being part of anything, let alone something special. It appeared as though the fat, uncool cats had won and got music back under their control after the storming of the barricades of Punk and its after-tremors. Luckily in 1985 diverting things slowly started to occur again – risks were taken and connections were made. There was just enough distance from Punk for some to try its methods once more, which meant people became energised again and wanted to do things themselves, put out records, write fanzines, to make things happen. Suddenly the live scene kicked itself out of the torpor and labels all over the country were putting out vital 7″, with the most prominent of this new breed of indie being Bristol’s Subway, the maverick Ron Johnson and Alan McGee’s Creation. Record buying became fun again and these songs anthems for that 10th summer after Punk.

All this activity lead up to “C86”, the NME’s attempt to corral all these noisy young blades in one place, originally as a throwback to the “C81” tape issued five year previous. That comp featured Orange Juice, the Subway Sect and Blue Orchids amongst others in a detailed look at the independent scene of that time, with a few major label rarities thrown into the mix. Through the “C86” cassette a popular image was eventually codified into the idea of a basin haircut toting, anorak wearing sad-sack getting jilted on a Teddy Bear’s picnic, but the truth was much more diverse and interesting than that. Yes you have plenty of jangle here from the likes Talulah Gosh and the Sea Urchins here, but that’s balanced by many other flavours, like the sneering grandeur of the Wolfhounds “Anti-Midas Touch”, (just a great record in any era) the unexpected Small Faces influence on Laugh’s “Paul McCartney” and One Thousand Violins wry “Please Don’t Sandblast My House”.

In fact the recordings on offer here point to 86/87 being the second and possibly last golden era of the UK Independent, just prior to when the Cartel, the distribution network that did so much to make small label records available all over the country, collapsed into oblivion. After that mortal blow, some groups remodelled themselves so extensively that they were unrecognisable as they chased chart success, saying there always was a dance element to their music while they flushed what was good about them in the first place down the toilet.

This “C87” collection is a great compendium of the disparate sounds that made up the post-C86 scene – many of the groups here went onto chart success, other obscurity, but they all made their mark. Of the ones setting a course to “Top Of The Pops”, anyone who recalls the Shamen solely through their Number One “Ebeneezer Goode” will be shocked to hear the distorted Psychedelia they specialised in their pre-House makeover days. The Darling Buds are recognisable though with some early dream-pop and the Inspiral Carpets are caught a couple of years before Madchester when they were a much more garage toned thing on “Now You’re Gone”. The Soup Dragons are here in their teeny Buzzcocks phase and the Wonderstuff (displayed here along with their Grebo co-conspirators Pop Will Eat Itself and Gaye Bykers On Acid) are caught early on too with “It’s Not True”. Carter the Unstoppable Sex Machine’s roots show in their earlier band, Pink Records’ Jamie Wednesday and the Primitives give an early sign of their pop prowess with “We Found A Way To The Sun”.

It may seem like hyperbole but some of the best music produced by these isles in the 1980s is here. Highlights include the slipping and sliding Punk Rock of the Rote Kapelle’s “These Animals Are Dangerous” (wonderful out of tune woodwind solo), the Flatmates “I Could Be In Heaven” which manages to combine first album Blondie with a touch of the Jesus and Mary Chain and This Poison’s “Poised Over The Pause Button” which is like the Wedding Present (featured on disc two with “My Favourite Dress”) taken a few notches more wild. Cud are a band I never really took too, though “Mind The Gap” is a full on attack and the House Of Love’s Real Animal” just oozes restrained menace. I Ludicrous come up with the typically acidic and utterly charming “My Baby’s Got Jetlag” and the golden indie pop of the Railways Children, Razorcuts and Brilliant Corners gets another run-out too.

Even though I flatter myself that I really kept my ear to the ground at the time, some of the bands featured on “C87” managed to sail under my radar. Bob don’t quite do it for me on this showing, but they had their good points. I certainly missed out on the Desert Wolves (pure pop), Gol Gappas (thrashy sort of jangle) and Rosemary’s Children (gentle acoustic, gorgeously sung), so someone has really been doing their homework here. Half of the fun is diving into this set and seeing what you missed, you would had to have been made of money and back copies of “Sounds” and the “NME” to have kept up!

While the first two discs offer an assortment of sounds but are heavy on the jangle-pop that “C86” has become so closely associated, disc three here seems to concentrate on the more “difficult” side of the scene – what John Peel termed “shambling” but to me they were pin-sharp and focussed. I have to be honest and say I was a massive fan of Bogshed and the Ron Johnson bands and I was pleased to see them featured here. Unfortunately Big Flame folded after the incredible “Why Popstars Can’t Dance” single and had by 1987 mutated into the more pop-inclined Great Leap Forward (“Grandfather’s Clock” shows their move towards a less confrontational but still appealing sound on disc one) so they’re not featured here.

But Ron Johnson is well represented. The Shrubs, who I can recall ripping it up at the old Labour Club in town, bring their dust-bowl Beefheart-etched skronk to “Edith” and A Witness come up like Iggy if he was bought up with damp Northern mornings and Ready Brek on “Red Snake”. Stump have “Tupperware Stripper” from their first EP on here and Scots the MacKenzies took up the baton from Big Flame on the manic funk of their début single “New Breed”. Of course the mighty Bogshed show the cruel world again what magnificence they missed with “Tried And Tested Public Speaker”, the late Phil Hartley possibly the only man who could make a bad Cockney impression work on record. Games To Avoid, a Southampton Post Punk band, metamorphosed into Stitched Back Foot Airman who fit in well with the RJ crowd with some choppy, abrasive avant funk. But it needs stating that most of this compilation is a lot edgier than you would give it credit for, with even the more “pop” bands seasoning their Byrds obsessions with Buzzcocks shuffle-drums and noisy guitar.

This box set comes complete with a booklet featuring sleeve-notes from Neil Taylor who compiled the original C86 cassette, plus band pen pictures giving an insight into their often brief but shining life-spans. “C87” doesn’t duplicate any of the tracks on the previous “linked” collections “C86” and “Scared To Get Happy” and represents a cheap way to get to grips with the noise coming up from the underground at a period of time nearly forgotten in conventional music history, but for me at least will always be when things came back to actually meaning something. It felt great to be alive and listening to this music which also provided a glistening soundtrack to a beautiful summer back then and possibly the one we’re going to have this year too.