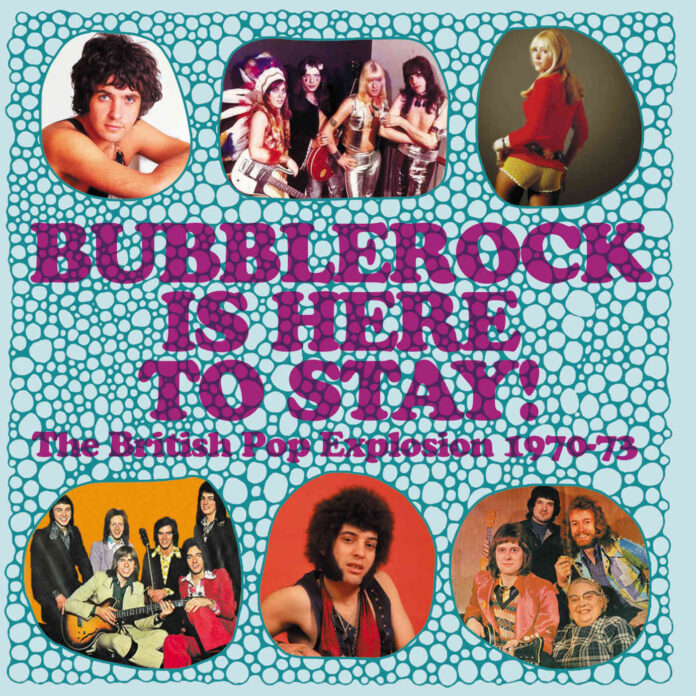 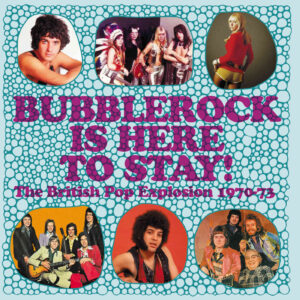 Bubblerock Is Here To Stay!

Subtitled “The British Pop Explosion 1970-73”, this set looks at the point in time where glam rock and bubblegum meshed, with The Sweet, Marmalade, 10CC (under a few pseudonyms) and even WBA legend Jeff Astle getting in on the act…Ian Canty remembers a simpler time, with simpler lyrics…

Bubblerock, as an entity, never really existed outside of an almost forgotten single and album masterminded by now-disgraced mogul Jonathan King. Here it just about works as a catch-all term for the kind of early 70s UK pop that had simple lyrical messages that were similar to bubblegum from the late 1960s, but also was musically touched on by glam’s big beat (without being quite committed enough to apply the lippy and go the whole hog). That is a generalisation of course, but, on the whole, the sounds here are of a softer, lighter pop kind.

A cast made up of studio chancers, 60s beat bands going for one last big score, would-be teen idols, Bowie-endorsed Teds and pop brainboxes taking various detours under assumed names, are all lumped together on this new set. Yes, this does result in somewhat of a hotchpotch. But, along the way, some big hit singles, bizarre obscurities and out and out flops rub shoulders to present something that fairly accurately maps out the borders of British pop music of the timescale given.

Disc one gets underway with the boot stampin’, hand clappin’ instrumental Groovin’ With Mr Bloe, a tune with an involved history that weaved a haphazard path through earlier versions featuring Elton John and Kenny Laguna. The final take was recorded by one Zack Laurence though and hit number 2 in the UK during 1970, showing the possibilities for oddball one-offs to conquer the UK charts at the time.

10CC’s extracurricular activities pepper Bubblerock Is Here To Stay!. Even when they were established as a chart act, they couldn’t resist diversifying under a number of different names. On this first disc, they feature as Hotlegs, perhaps their most famous pseudonym because of the super-basic smash hit Neanderthal Man, with which they are represented here. Travellin’ Man, by Tristar Airbus, which features the soon to be 10CC-ers performing a Graham Gouldman number, also shows up early on and is joined on disc two by them stamping their trademarks through a fun Da Doo Ron Ron like a stick of rock, rendered under the name Grumble.

10CC also back Pete Cowap on his Crickets single, which could be seen as a countrified dry run for Dreadlock Holiday and appear as Festival with the smooth folk-pop of Warm Me. The final Godley/Creme/Stewart/Gouldman linked effort is the excellent garage-pop throwback of Kev & Lol’s Hello Blinkers on the third disc of Bubblerock.

Elsewhere on disc one Simon Turner, who later on in the 1980s would become él Records mainstay The King Of Luxembourg, entertains with the basic but enjoyably riffy pop of 17 and the eerie psych-stomp of Friend Of Mine by Dr Marigold’s is a weird-out winner. The obscure Posse cover I Fought The Law in a bubblegum style and rock & rollers Fumble, who numbered among their fans a certain David Bowie, add a dash of glam to their teddy boy-friendly Alexandra Park (Palisades Park).

My Little One, by (The) Marmalade, shows a sure way with a delicate tune that surely deserved to be remembered more, despite having charted in the top 10 during 1971. The acoustic pop of Tawny Wood is in a similarly relaxed and pretty mode, with artists The Answers from Salford having originally formed seven years before this recording. Autumn follow with the fine, upbeat harmonies of My Little Girl and The Matchmakers take a Troggs-style stomp Turn Me On neatly into the 1970s. Pride of place for me though has to go to Rick Price’s smart and snotty Top Ten Record, which does an excellent job of sneering at the glitzy pop scene it ironically aspired a slice of.

Beginning with the skinhead/suedehead reggae cash-in Johnny Reggae by The Piglets, disc two takes in the glam rock “real deal” outfit The Sweet’s Wig Wam Bam, which, though it doesn’t seem to fit the concept, is still a mightily meaty slice of rockin’ boppy pop. The Sad, another band with 1960s roots back to the beat scene, are represented by try-bi epistle It Ain’t Easy, later covered in an amended form by Kevin Keegan of all people. It seems the perfect point to raise fellow striker Jeff Astle’s Sweet Water, a creditable disc showcasing his more than adequate voice, which even John Peel rated.

Reggae still held some sway in the early 1970s, as witnessed by X Certificate’s daft comedy disc Don’t Stick Stickers On My Paper Knickers and Mayfair by Millie Small. The latter has a good beat, but be warned this record tied in with her Mayfair photoshoot, a snap from which is included in the accompanying booklet. Jackie Lee’s Rupert theme tune is simply a singalong pop classic and I’ll entertain no argument on the subject, but the sleeve note trying to justify Bubblerock’s It’s My Party as an equal and precursor to Devo’s Satisfaction is simply an argument as weak as water. There is no comparison in my view.

Viv Stanshall opens up the final disc of this set with a horn-filled version of the Elvis hit Suspicion, he’s backed by half of The Who on this typical piece of tomfoolery. But after that this section of Bubblerock… struggles to build up a head of steam, only really taking off with Design’s lively The Jet Song (When The Weekend’s Over) and the proto-synth/psych-pop of You Got A Good Thing by Touchwood. Then there’s the very talented Peter Skellern, who, apart from skilfully crafting sharply-drawn, catchy nuggets like Our Jackie’s Getting Married, was also the last person to play Carter Brandon on TV.

An early line-up of the Bay City Rollers recut The Gentry’s 60s US hit Keep On Dancing well and Christyan, showing up here with the cool post-psych of Nursery Lane, providing a home for David Paton, later of Pilot. Members of mod outfit The Carnaby made up Sparky, who proffer the solid jamming beat of You Gotta Have It Sometimes. But, enjoyable as that is, it serves only as a preamble to Jon Pertwee’s mighty Who Is The Doctor?, where the erstwhile Worzel Gummidge hams it up dramatically in his Dr Who character, while elements of that programme’ theme are mixed to a fuzzy dance rhythm to truly magical effect.

It is very difficult to follow something as bat-shit crazy and brilliant as that, but Timothy James by Rod Thomas does the job admirably. This is a pretty fine character study with a very appealing guitar line and it’s a shame we didn’t hear more from him. Butterscotch’s Don’t You Know is a lovely MOR soul confection and a version of the act Kenny give us a smart Neanderthal Man cop of Heart Of Stone. At that time, a solo singer called Tony Kenny was entrusted with the name by crack songwriting team Phil Coulter and Bill Martin, but he was later given the heave-ho and the mob who did The Bump and the Minder theme took over instead.

Unfortunately, after this, Bubblerock Is Here To Stay does peter out somewhat, mainly consisting of the kind of pleasant but undistinguished material that does tend to proliferate a little too much all through this collection. After High Noon’s slight but decent pop/rock Drivin’ Drivin’ there’s a pretty dreadful Mouldy Old Dough cash-in by Flanelcat in Yer Big Girl’s Blouse. The whole thing grinds to a halt with King babbling in echo under the Bubblerock moniker.

An undistinguished end to what, in truth, is a compilation that, although possessing a fair amount of good songs and tunes, struggles to justify the concept over three discs. If you’re looking to pick up some of those 10CC rarities and are not averse to a fair amount of stuff that sounds like it could have been the work of the Strawberry boys, this set may be for you. 1970s collectors will be in their element and lovers of slightly daft, camp pop tunes also might enjoy the ride. Whilst I found it fun enough most of the time, I do wish a little more quality control had been exercised – two discs would have been enough really. Nevertheless, Bubblerock Is Here To Stay! seeks to provide a home from records that fell between the cracks of glam and teenybop and for the most part it is successful.