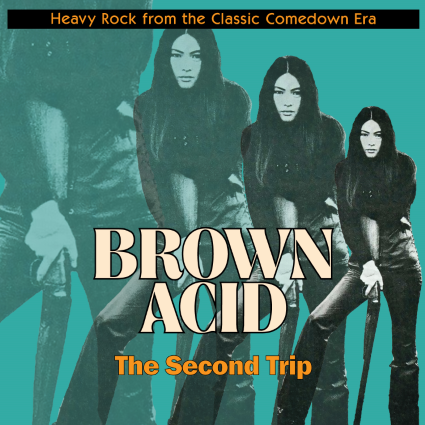 Second instalment of the sludge-monster compilation series, focussing on rare heavy sides from the late 60s/early 70s….Ian Canty looks in on bands seemingly in the middle of a Venn diagram of the Stooges, Hendrix and Black Sabbath and looks out of place in his boots and braces among the frantic head-banging

Very much a labour of love for Permanent Records co-owner Lance Barresi, the first “Brown Acid” comp was a huge success and now we’re back for round two more Stoner-Power tracks that marry the spirit of the MC5 with Deep Purple organ excess, sometimes mangling in some ear-crunching Prog flourishes which would make Ian Anderson buckle at the knees for effect! Slim pickings in the Psych/Garage/Punk field through the crates being dug out completely means that proto-metal misfits like those featured here who previous were left on the sidelines now take centre stage. This leads to a major amount of grease-ridden fun and “Brown Acid 2” is a worthy follow-up to the original album.

There’s many joys to be had with the range of noise on offer, pretty much hidden since the day of their original release. Raving Maniac’s “Rock N Roll Man” is more of a hard boogie number with some great fuzz guitar employed to good effect and Crossfield’s “Take It” is a loose and languid Iggy-like leer performed by some hairy teenage headcase no doubt! “Glass Sun’s pile-driving “Silence Of The Morning” is full to brimming with punky garage sneer, another highlight and on a different tip Sonny Hugg’s “Daybreak” is what the later version of the Brian Augur Trinity would sound like after 20 espressos and an unfortunate incident with a cattle-prod. Spiney Norman (Python fans and Prog seem to go together like a horse and carriage) reboot Jethro Tull and (crumbs) Wishbone Ash on for flute-riven mayhem on “Bell Park Loon” and the Volt Rush Band kick out the jams and no doubt honey too with bendy guitar breaks included on “Love To You”.

These records originally came out nearly 50 years ago but the power comes surging back with this release, which informs current heavyweight sluggers if they know it or not!